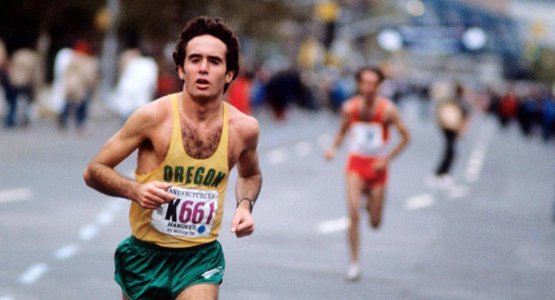 Alberto Salazar won the first marathon he entered. He was 22. In 1980, he won the New York City Marathon and went on to win it again in 1981, finishing with a time of 2:08:13 and setting a new course record.

The following spring, at the Boston Marathon, he outsprinted Dick Beardsley by two seconds in one of the most exciting distance races in American history—the “duel in the sun.”

Under glaring sun and 70-degree temperatures, the two men were neck and neck for the entire 26.2 miles. Despite the heat, Salazar never drank water, fearing the extra weight would slow him down. After crossing the finish line, he collapsed. Salazar would never race the same again.

“He should have been the greatest marathoner of all time,” said Michael Deschenes, chair of William & Mary’s Department of Kinesiology and Health Sciences. “Salazar started out by winning the New York and Boston, which was incredible, but he had to stop. He kept on having to have his last rites read to him at races, because he was pushing himself too hard.”

By the age of 27, Salazar’s career as a runner was over. He had worked his body to its breaking point. Salazar developed chronic health problems that a doctor eventually linked to the extreme conditions he forced on himself during the “duel in the sun.” Salazar’s downfall showcases a uniquely human attribute, Deschenes explained, the dangerous disconnect between a motivated mind and its bodily host.

“No other animal will do that to itself,” Deschenes said. “We’re the only ones that will say ‘I’m gonna keep going and keep going.’ We push ourselves to death. You can always try to push yourself a little harder, but you have a physiological limit.”

It’s that limit Deschenes has spent his career working to understand. He specializes in the neuromuscular system, the network of nerves that connects our brains to our muscles. He is particularly focused on the neuromuscular junction, the synapse where the message goes from the nerve to muscle tissue, the precise location where the muscle receives its marching orders.

In a recent study published in Experimental Gerontology, Deschenes and a team of four W&M undergraduate co-authors—Shuhan “Sherry” Li, Matthew Adan, Jane Oh and Hailey Ramsey—examined the neuromuscular system during endurance training with the goal of learning how its response varies with age.

They found the two components of the neuromuscular system, nerves and muscles, do not respond in tandem to either aging or exercise training. It was previously thought the two parts of the system worked in concert, but the team’s research indicates that nerves and muscles aren’t quite the partners experts once thought.

In fact, the neural component of the system, the pathways the brain uses to communicate with the body, tired before the actual physical muscle. The loss of strength in their subjects was linked to “fatigue-related impairments in neuromuscular transmission,” the study read.

“What we call muscle fatigue is a lot more likely to be neural fatigue,” said Deschenes. “It’s not that the muscle isn’t capable of generating more force—it’s that the nerve isn’t capable of instructing the muscle to do the best it can. When you say, ‘my muscles are tired,’ it’s more likely your nerves are tired. They can’t activate your muscles as well as they did in the beginning.”

We are, Deschenes explains, quite literally stronger than we think.

The research team conducted a series of ex vivo experiments by stimulating both nerve endings and muscular tissue and gauging the force produced. The researchers used animal models of various ages and in various stages of endurance training.

The researchers found that stimulating the nerve produced roughly two-thirds the force of what the muscle tissue was physically capable of producing. Deschenes and his team used the data to conclude the neural half of the system was tiring before the muscular one—and there could be an evolutionary reason for that.

“There’s a physical limitation. You get to the point where you just can’t do it anymore,” Deschenes said. “That’s for good reason, so we don’t damage ourselves.”

Salazar was case in point. But the team’s most interesting finding, Deschenes said, had to do with age. When it came to young muscles, the greater part of their strength was neural rather than muscular at the outset of endurance training. The younger control group started with the strongest neuromuscular transmission efficiency, but after five minutes of stimulation, as the synapses fatigued, muscles from the youngest models began to resemble muscles from the oldest.

“We found out there’s a big difference between aged and young in the very beginning,” Deschenes said. “When you get the end of the five-minute protocol, the young tired muscles are behaving like old tired muscles.”

The researchers found that young tired muscle produces the same amount of force as old tired muscle after continual stimulation or exercise.