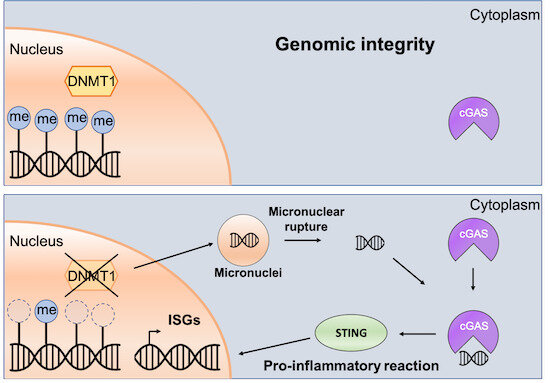 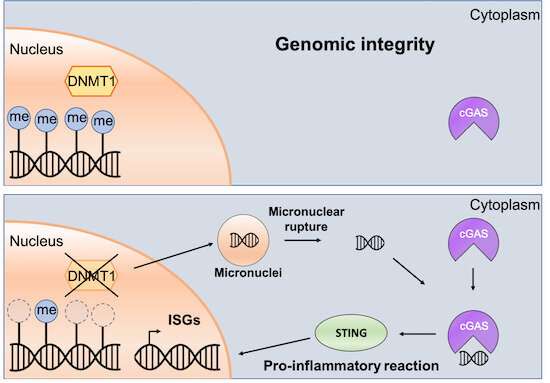 The innate human immune system is capable of recognizing and fighting pathogens such as viruses, bacteria or parasites. In addition to other conserved structure, it can detect pathogens based on their RNA and DNA. Since these nucleic acids are also present in human cells the immune system must be able to differentiate endogenous substances from exogenous ones in order to avoid autoinflammation or autoimmune diseases. This mechanism is also known as self/non-self discrimination. In a study now published in the renowned EMBO Journal, the research group of Christian Seiser (Center for Anatomy and Cell Biology at MedUni Vienna) could show that the epigenetic key enzyme DNA methyltransferase 1 is an important factor in preventing autoinflammation.

“Methylation of DNA is the most important epigenetic mechanism in our cells. It not only controls cell-specific gene expression but prevents the activation of endogenous viruses, the so-called transposons, which can change their position within the genome and may induce cellular defense mechanisms,” explains Seiser. “We have now shown in our study that autoinflammation and pathological changes occur in the skin when the key epigenetic enzyme DNA methyltransferase 1 is absent.”

In addition to the activation of transposons, reduced DNA methylation results in genomic instability, leading to the formation of cytoplasmic DNA (Micronuclei, DNA blebs). “When micronuclei are formed, cGAS, one of the main regulators of the innate immune system, erroneously recognizes the DNA as foreign or “non-self” and activates the immune system.”