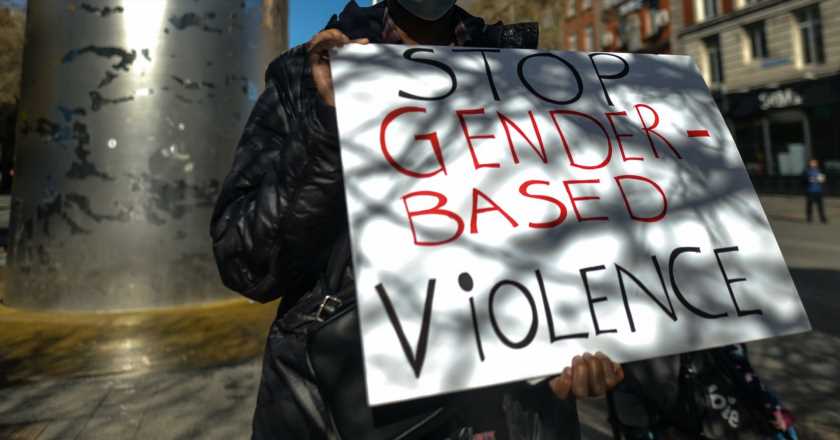 From public campaigns to in-person conversations, what kind of messages encourage men to see gender-based violence as their problem?

“Getting through to men about male violence against women“. Does that sound condescending? Maybe a little. Men aren’t children; contrary to the title of a popular 90s self-help manual, they don’t come from another planet. Ideally, it wouldn’t be difficult for them to grasp how all women’s lives are shaped by men’s violence. Every man would see male violence against women as a major problem – one he can, and should, help solve.

But of course, it doesn’t work like that. There are male allies out there, but too many men still hold poisonous or ignorant beliefs that drive, excuse and enable endless forms of gender-based violence. Men who find gratification in trading nude photos of women online without their consent. Who laugh or look away when their friends harass women in public. Who believe coercive and controlling behaviour is acceptable if they feel insecure in a relationship.

As a result, everyone from the World Health Organisation to the UK government’s Women and Equalities Committee agrees that if we want to prevent male violence against women, we need to challenge the attitudes behind that violence. Experts have long demanded drastic improvements to education around gender equality and healthy relationships in schools, and called for long-term public campaigns designed to shift misogynistic beliefs and social norms.

The Met police has apologised for using “sexist, derogatory and unacceptable language” against a woman during a strip search

Stylist has been calling on the Home Office to launch just such a campaign – but while the government promised to create a multimillion pound campaign as part of last summer’s strategy for tackling violence against women and girls, it has yet to materialise.

Throughout all gender-based violence prevention work, men must be encouraged to listen, reflect and take action – changing their own behaviours and calling out others if necessary. The Istanbul Convention, a historic European human rights treaty, actually emphasises that men and boys have a particular responsibility to “actively” prevent male violence against women.

That’s why Stylist reached out to four men who are playing a positive role in trying to reduce domestic abuse, sexual violence and harassment in the UK: a sociologist, a former police officer, a criminologist and a school workshop facilitator.

A Fearless Future: join Stylist’s campaign to change the attitudes behind male violence against women and girls

These experts have spent years working with men and boys, from ordinary secondary school students to convicted domestic abusers, to understand and challenge their beliefs about gender-based violence. They’ve thought deeply about the best ways to get through to men about the effects of harassment, assault and abuse.

So we asked them all the same question: how do you talk about male violence against women in a way that gets men and boys to listen?

How to talk to men about male violence against women: simple messages have their place, but more complex conversations are crucial

Get specific about unacceptable behaviours

Dr Stephen Burrell is a sociology professor at the University of Durham, whose research has focused on how to engage men in preventing male violence against women. For a recent study, he facilitated focus group discussions with 45 members of men’s university sports teams in England, and showed them five campaign videos about male violence against women from the UK, Europe and Australia.

Burrell found that many of the participants in his focus groups resented overly simplistic campaign messages. Those that merely told young people what not to do, or promoted basic messages about consent, were seen as patronising and reinforcing low expectations of men.

At the same time, several men in Burrell’s focus groups still expressed uncertainty about the ‘boundaries’ around unacceptable and abusive behaviour after watching the campaign videos. This suggests conversations about male violence against women need to be both nuanced and specific.

“If you’re just saying, ‘Don’t be violent, don’t commit sexual assault’, that’s better than nothing,” Burrell says. “But messages need to be more complex, and they need to explore how these dynamics actually work in people’s day-to-day experiences, relationships and sexual interactions.”

How to talk to men about male violence against women: Graham Goulden says his first attempts were greeted with “men looking at me with folded arms, saying things like ‘not all men’”

Accept that conversations may be uncomfortable

No one should ever tell women not to be angry about male violence, but a different tone may be useful when trying to engage men and boys directly in the issues surrounding male violence against women and girls.

Graham Goulden, a former police officer in Glasgow, has worked on projects to reduce male violence against women for more than a decade, including peer mentoring programmes and bystander intervention training. He is inspired by the veteran US domestic abuse activist Esta Soler, who has spoken about the value of making men feel “invited, not indicted” into discussions about male violence against women, and says a non-judgemental approach is most effective.

“One of the big mistakes I made when I first started doing this work was using language that was quite hostile towards men,” says Goulden. “I got pushback; men looking at me with folded arms, saying things like ‘Not all men’ or ‘Men are victims too’. There wasn’t a lot of engagement.”

The suggestion that men need to be led gently into discussions about male violence against women is undeniably frustrating. It can seem downright offensive, when you consider that the fear of male violence can often prompt women to moderate their tone of voice – making themselves softer, gentler, more polite. Perhaps that’s why it’s useful, and necessary, for men like Goulden to step up into these conversations.

“Women have every right to be pissed off [about male violence], and when doing this kind of prevention work, you can still hold [men] accountable and tell them they’re wrong,” he says. “But for the conversations to be productive, you also have to meet them where they’re at and try to understand some of their viewpoints, even if it’s uncomfortable.”

Offer a reminder that everyone can change

Last year, Goulden helped develop Police Scotland’s ‘That Guy’ campaign, which encourages Scottish men to reflect on how they might be perpetuating sexual violence. While unflinching in its critique of male sexual entitlement, the campaign film is underpinned by a hopeful message: it suggests men who’ve harmed women in the past can choose to do better.

Professor David Gadd, a criminologist at the University of Manchester who’s spent two decades interviewing offenders and researching domestic abuse and masculinities, says it’s important to remind men that there is an alternative path to controlling, coercive and abusive behaviours. The alternative is to suggest that they’re incapable of change – or wait for their behaviour to escalate to the point that the police get involved.

Perpetrators of the most extreme forms of domestic abuse are very unlikely to change after being called out by a friend or watching a government campaign video on social media. Gadd says these men will need to work with skilled professionals on a long-term basis if their abusive patterns of behaviour are to be disrupted.

But, he adds, the vast majority of men “will never fully batter their partners in the way some filmic images of domestic violence would have it”. That doesn’t mean they won’t “check up on their partners, make comments about what they should and shouldn’t wear, that kind of lower-level controlling behaviour” – and these men may be reached through public campaigns and wider cultural conversations. “We’ve got to give those guys the option of walking their way back into having respectful relationships,” says Gadd.

How to talk to men about male violence against women: Beyond Equality avoid the term ‘toxic masculinity’ in their workshops

Talk about masculinity – without mentioning the ‘T’ word

Research published by the government in 2014 suggested that deep-rooted ideas about traditional masculinity, particularly those linked to controlling and aggressive behaviours, play a role in male violence against women. One solution is to offer clear, positive alternative ideas about what it means to be a man. But those working with men and boys know to tread carefully when talking about masculinity.

Nat Horne is the schools and volunteer community coordinator at Beyond Equality, an organisation that works with men and boys to help them rethink masculinity and prevent gender-based violence. “We were doing a workshop in a school recently, and I asked the [male students] what they thought the session was going to cover,” he says. “They were all a bit negative, and said” – he puts on a weary voice – “‘Toxic masculinity.’”

Sarah Everard’s killer is in jail – but we must prevent male violence against women, not just punish it

At the end of the session, however, Horne says a student approached him and said: “I was fully expecting to hate that, but I really got something out of it.” The key, he says, is to encourage men and boys to consider how “their environment and the way they’re socialised could lead them to be violent, and how that can impact them and the women and girls in their lives if they’re not aware of it”.

As well as more obvious subjects such as consent, he’ll talk with boys about how emotional repression can lead to angry outbursts, or how competitive sports may foster aggression.

“It’s not about telling boys that they personally are wrong or violent,” says Horne. “But the root of the conversation is always the same – men hurt people. And that’s what we’ve all got a responsibility to tackle.”

With the support of more than 60 experts, MPs and public figures, Stylist is calling on the government to launch a long-term public campaign challenging the attitudes behind male violence against women – aimed directly at men. Find out more about our call for #AFearlessFuture