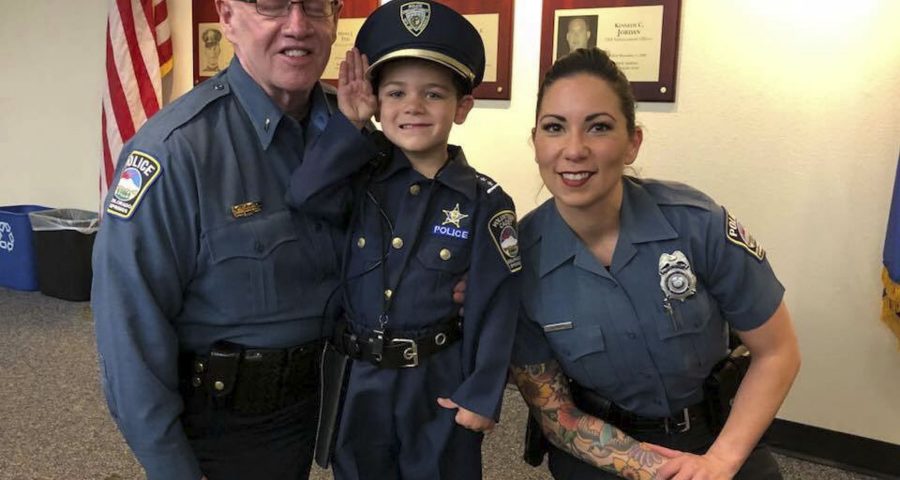 Officer Joshua Salmoiraghi celebrated completing his last round of chemotherapy with the support of his fellow officers.

“Update on Officer Joshua,”the Colorado Springs Police Department wrote on Sunday in a message shared on their official Twitter account.

Great news! Joshua completed his last round of chemo,” they continued, adding that in honor of his big day the little policeman also got a chance to “ring the bell Sunday afternoon at Children’s Hospital in Denver!”

Alongside the supportive post, the police department included a sweet video showing the 4-year-old boy making his way down the hospital hallway surrounded by a cheering crowd. After reaching the end of the corridor — and slapping hands with many of his well wishers — Joshua takes hold of the string attached to the bell, ringing it repeatedly.

Joshua was first diagnosed with stage-four kidney cancer in June 2017 when he was 3, according to Fox News. After doctors removed an 11-centimeter long tumor from his left kidney, they considered him as being in remission, but in January, they found another tumor in his left lung.

In April, shortly before he was to begin an aggressive round of chemotherapy at the Children’s Hospital for the new tumor, he was made an honorary member of the Colorado Springs Police Department, NBC News affiliate KOAA reported.

In an interview with Fox21, officer Warren Listful explained that Joshua’s story “struck a nerve with me” because his wife “also has stage four [cancer].” He then decided to help make the boy’s dream of becoming an officer into a reality.

Having only recently moved into the Colorado Springs area after his mother, a major in the United States Air Force, was relocated, the family has been especially touched by the sweet gesture, according to KOAA. They moved along with his father, and his two older brothers Benjamin and Timothy.

The outlet also reported that according to the police, Joshua is expected to undergo additional radiation therapy for his chest in the coming weeks.