Bumping up the prices of ALL sugary drinks by 20p – more than the Government levy – cuts consumption by almost a THIRD, finds study

Bumping up the prices of all sugary drinks by 20p cuts consumption by almost a third, a new study suggests.

The approach is different to the Government’s controversial levy, which charges manufacturers depending on sugar content.

It has caused some beverages, including classic versions of Coca Cola, Red Bull and Pepsi, to have jumped in price by as much as 11 per cent.

But the new research, led by Sheffield University, found a flat 20p bump in prices for all sugary drinks is potentially more effective. 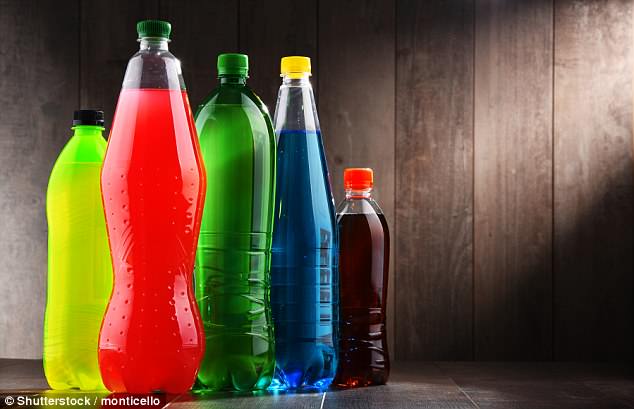 Firms now have to pay a levy of 18p a litre if their drinks contain more than 5g of sugar per 100ml, or 24p a litre if more than 8g

This means customers would be charged 90p for a can of Coca Cola, instead of the usual 70p before the Government’s levy – nearly a 30 per cent jump.

Major leisure centre operator SIV introduced the levy in their cafes and vending machines across South Yorkshire for the study.

Researchers discovered the higher price caused sales of sugary drinks to drop by 30 per cent and put parents off buying the drinks for their children.

Professor Liddy Goyder, who led the study, said: ‘The biggest impact was on sales of the sugary drinks marketed for children.

WHAT IS THE SUGAR TAX?

What is the sugar tax?

From April 6, soft drinks companies will be required to pay a levy on drinks with added sugar.

Why are the Government introducing the tax?

It is hoped the tax will encourage drinks companies to cut down on the amount of sugar in drinks, and consumers to choose lower sugar alternatives.

How much is the tax?

Prices of popular drinks may rise and the size of portions shrink as a result.

Will it apply to all drinks?

The new levy will not be paid on milk-based drinks and fruit juices.

However George Osborne, who unveiled the tax policy as chancellor, has predicted that the tax will be extended to include milkshakes with large quantities of sugar.

‘The 20p price increase seems to have made parents think more about the choices they were making when buying drinks for their children.’

She continued: ‘This is hugely important when considering the current focus on reducing childhood obesity in the UK.’

However, despite the drop, sales of artificially sweetened drinks shot up by 27 per cent. There was no change in demand for water or fruit juice.

Results from the study showed the policy removed the equivalent of 1.3 tonnes of sugar from Sheffield.

Too much sugar is one of the leading causes of both tooth decay and childhood obesity with a third of youngsters now overweight.

Experts have repeatedly claimed that cutting down on sugar would drive down obesity in children and help slash hospital admissions.

The Government recommends four to six-year-olds have no more than 19g or five teaspoons of sugar a day.

Seven to 10-year-olds have a slightly higher limit and are urged not to consume more than 24g a day, or six teaspoons.

But the most recent National Diet and Nutrition Survey showed under-11s consume more than three times these limits.

The data showed they have the equivalent of 14 teaspoons or 54g a day – with 15 per cent coming from soft drinks. 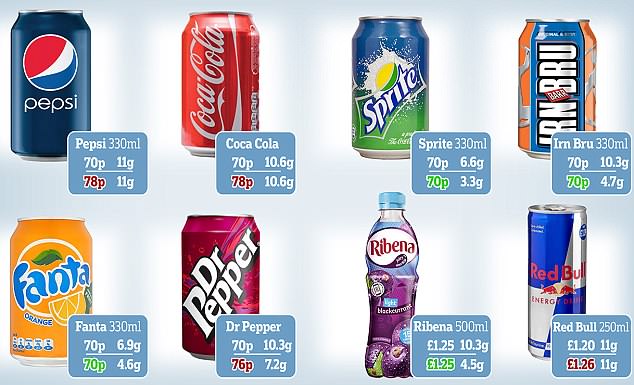 Firms now have to pay a levy of 18p a litre if their drinks contain more than 5g of sugar per 100ml, or 24p a litre if more than 8g

Sugar tax: The effects on price

Pepsi and Coca Cola refused to slash the sugar content in their classic drinks over fears of a consumer backlash when the Government levy came into play in April.

As a result, the two drinks are subject to the heavier levy – meaning they have to pay 24p extra per litre to the Treasury.

Red Bull, which contains 11g of sugar, is also subject to the higher tax. Its 250ml cans, which usually retail for around the £1.20 mark, will now cost 6p more.

Dr Pepper slashed its sugar content because of the new tax.

The formulas of Fanta, Ribena, Sprite and Irn Bru were all changed to avoid their manufacturers being stung by the sugar tax.