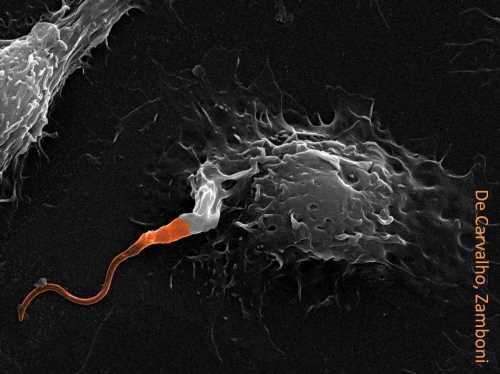 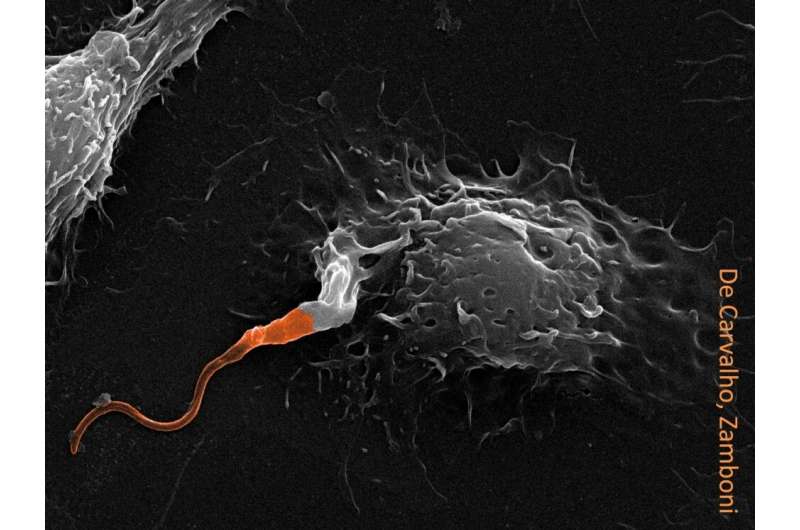 Researchers have succeeded in revealing the arsenal used by protozoans of the genus Leishmania in human cells to make leishmaniasis more severe, especially in cases of the mucocutaneous variety of the disease, which can cause deformations in patients. The discovery points the way to a search for novel treatments for the disease as well as casting light on a key mechanism involved in other diseases.

The mechanism involves Leishmania, macrophages and a virus that lives endosymbiotically in the parasite and is known as the Leishmania RNA virus (LRV). According to a study published in the journal iScience, the parasite inhibits activation of caspase-11 via LRV-induced autophagy. Caspases are a family of enzymes that play essential roles in programmed cell death and the innate immune system. LRV, therefore, prevents defense cells from blocking progression of the disease.

Infectious and not contagious, leishmaniasis is considered endemic to some regions of Brazil. The mucocutaneous form of the disease, caused in the Neotropics by species such as L. guyanensis and L. braziliensis, is characterized by skin lesions that affect the mucous membranes of the nose, mouth and throat. In severe cases, it can lead to cartilage and bone erosion and cause deformations. Some 20,000 cases of tegumental leishmaniasis, which includes the cutaneous and mucocutaneous forms, are reported each year in Brazil.

The study showing how LRV blocks caspase-11 via autophagy was part of the Ph.D. research of Renan V. H. de Carvalho, with Dario Zamboni as thesis advisor. Zamboni is a professor in the Department of Cellular and Molecular Biology and Pathogenic Bioagents at the University of São Paulo’s Ribeirão Preto Medical School (FMRP-USP) in Brazil.

“Using macrophages and mice, we discovered that LRV inhibits activation of caspase-11 by Leishmania, and this extends our understanding of the mechanisms used by the virus to exacerbate the disease,” Zamboni said.

The study, which belongs to a series already published by the group, innovated by showing the link between caspase-11 and diseases caused by parasites. Hitherto the enzyme was thought to be involved only in diseases caused by bacteria.

An article by the group published in 2019 in Nature Communications showed that the most severe cases of mucocutaneous leishmaniasis are caused by the LRV-infected parasite. Both studies were supported by FAPESP and conducted under the aegis of the Center for Research on Inflammatory Diseases (CRID), a Research, Innovation and Dissemination Center (RIDC) funded by FAPESP and hosted by FMRP-USP.

Almost all immune cells contain a protein complex called the inflammasome, Zamboni explained. When one of the proteins, such as a caspase, detects a threat to the organism, the defense system is activated. “We had already shown that LRV exacerbates the disease by subverting innate immunity via inhibition of the TLR3-mediated NLRP3 inflammasome. In this latest report, we showed that autophagy blocked the inflammasome via caspase-11.”

For Carvalho, currently a researcher at the Rockefeller University’s Laboratory of Lymphocyte Dynamics in New York, “the iScience article solidifies our understanding that caspase-11 is extremely important to the pathogenesis of leishmaniasis”. This had not yet been described, he told Agência FAPESP.

Mucocutaneous leishmaniasis is transmitted by sandflies of the genus Phlebotomus, which feed on blood. Prevention, therefore, depends mainly on combating the insect, just as Aedes aegypti must be combated to prevent the spread of dengue fever. Both leishmaniasis and dengue are classed as neglected tropical diseases (NTDs).

Some 1.5 billion people are thought to be affected by NTDs in over 150 countries, particularly in regions with insufficient potable water, basic sanitation, and primary healthcare services. On the other hand, less than 2% of the world’s drug development resources are devoted to combating these diseases, according to the nonprofit organization Drugs for Neglected Diseases Initiative (DNDi).

There are no vaccines for some NTDs, and many of the available treatments focus on drug repositioning, which entails the use of medications originally developed for other applications, a strategy that heightens the risk of severe adverse side-effects for patients. To try to improve the situation, in February the World Health Organization (WHO) issued Ending the neglect to attain the sustainable development goals: A road map for neglected tropical diseases 2021-2030, proposing actions and programs to prevent and control 20 NTDs, including leishmaniasis.

“Everything we’ve shown about this system involving Leishmania, viruses and macrophages can have an impact on the fight against other diseases,” Carvalho said. “Hence the importance of basic science. Understanding biology serves as a foundation for the rapid future development of new therapies for diseases that already exist or could emerge in the future.”

He went on to cite the current example of COVID-19 vaccines. “A key factor in having vaccines ready so quickly was the work done by research groups around the world to study the spike protein in other coronaviruses that hitherto haven’t infected people,” he said. “This basic science helped us develop vaccines against SARS-CoV-2 soon after it was detected.”

This link between previous discoveries and the advances brought by new studies is the focus of a FAPESP-funded Thematic Project, for which Zamboni is the principal investigator. The work on Leishmania was done under its aegis, as was a more recent research project on COVID-19.