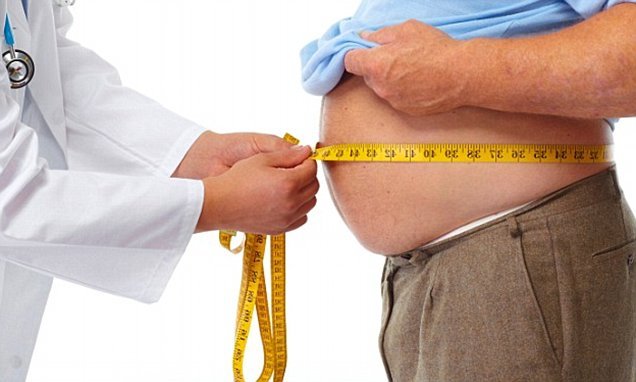 World faces a ‘staggering’ obesity crisis: Almost a quarter of people across the globe will be severely overweight in less than 30 years, study finds

Almost a quarter of the world’s population will be obese in less than 30 years, new research suggests.

If obesity trends continue, 22 per cent of people around the world will be severely overweight by 2045, up from 14 per cent last year, a study found.

One in eight people, rather than today’s one in 11, are also expected to develop type 2 diabetes, the research adds.

Lead author Dr Alan Moses, from the Denmark-based pharmaceutical company Novo Nordisk, said: ‘These numbers underline the staggering challenge the world will face in the future in terms of numbers of people who are obese, or have type 2 diabetes, or both.

‘As well as the medical challenges these people will face, the costs to countries’ health systems will be enormous.’

People with type 2 diabetes have an average life expectancy of just 55 due to them being at a much higher risk of heart attacks, stroke and kidney disease. OBESITY ON THE RISE IN AMERICA’S YOUNGEST CHILDREN

The rate of childhood obesity has tripled since the 1970s, affecting one in five children in the US and 14 percent of those ages two to four years old, according to CDC data released in February.

Childhood obesity is now the number one health concern among parents in the US, topping drug abuse and smoking.

Obesity continues to plague more than one third of adults in the US, and experts have warned that that proportion will only grow as younger generations do.

Over the last two decades, the US has implemented countless awareness programs to try to combat the obesity epidemic.

Former First Lady Michelle Obama became a mascot for healthier children while her husband was in office, spearheading the ‘Let’s Move’ campaign, designed to motivate children to eat healthier and stay active in an effort to promote overall health.

But in December of last year, the United States Department of Agriculture announced that it would relax the school lunch guidelines she championed – requiring more fresh fruits and vegetables and low-sugar dining options – in favor of new rules that would allow sweetened milk and sodium rich entrees.

‘The NHS will be overwhelmed’

Type 2 diabetes will also affect 18 per cent of the population versus today’s 14 per cent.

According to the researchers, ‘aggressive and coordinated action’ is required to combat the world’s growing obesity epidemic.

Dr Moses added: ‘Each country is different based on unique genetic, social and environmental conditions which is why there is no ‘one size fits all’ approach that will work.’

‘Individual countries must work on the best strategy for them.’

Dr Moses added the UK faces a ‘staggering challenge’ to drastically slim down or it will face an unsustainable health bill.

He said: ‘The bottom line is we are undergoing a rising trend for both obesity and diabetes and it is unsustainable for patients and healthcare systems.

‘The NHS will be overwhelmed unless action is taken.’

The researchers analysed World Health Organization population data from countries around the world.

This data was organised according to BMI and age groups.

The researchers then looked at changing BMI trends to make predictions for the future.

Findings were presented at the European Congress on Obesity in Vienna. A bottle of water a day that boosts youngsters’ ‘good’ bacteria may combat childhood obesity, research revealed in June 2017.

Water containing a prebiotic supplement should make obese children a healthy weight after just one year, a study found.

This compared to a 17.6lb (8kg) weight gain among children receiving a placebo, the research adds.

Study author Professor Raylene Reimer from the University of Calgary, said: ‘Powdered fiber, mixed in a water bottle, taken once a day is all we asked the children to change, and we got, what we consider, some pretty exciting results – it has been fantastic.’

The researchers asked 42 obese or overweight children aged seven to 12 years old to receive either a prebiotic, known as oligofructose-enriched inulin, or placebo once a day for 16 weeks.

The prebiotic was a white powder mixed in water.

Prebiotics are indigestible food ingredients, such as fiber, that act as fertilizers to stimulate the growth of bugs in the digestive tract. Probiotics specifically introduce new bacteria into the gut.

‘This is entirely believable and desperately sad’

Speaking of the expected cases of type 2 diabetes, Dr Moses said: ‘It takes 10-to-15 years for someone’s obesity to translate into diabetes.

‘For those countries where diabetes prevalence is past 10 per cent now, the likelihood of getting it below that figure is small. But it doesn’t mean we shouldn’t try.’

Diabetes UK revealed almost 3.7 million people have been diagnosed with the condition but the true figure was likely much higher.

The charity warned that another 12.3 million are at risk of developing the disease because of poor diet and a sedentary lifestyle.

It already costs the NHS almost £9billion a year and one in six hospital beds at any one time are occupied by someone with the condition.

‘We shouldn’t be surprised.,’ he said, adding: ‘As long ago as 2007 Whitehall was warned that 50 per cent of UK citizens would be obese by 2050 and governments have continuously failed to take the action required to stem the epidemic.

‘This study is entirely believable and desperately sad.’