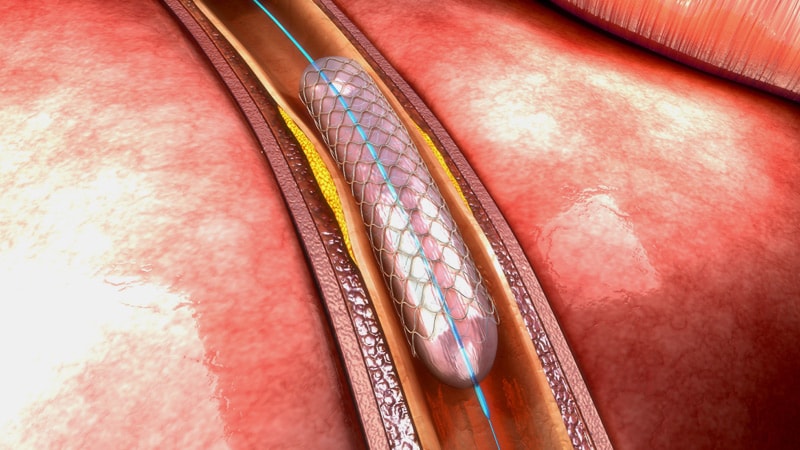 The objective of these two analyses was to evaluate whether there was a benefit-to-risk ratio advantage for those who entered the study with high bleeding risk or who had undergone a complex PCI. Overall, bleeding risk was reduced without a major increase in cardiovascular events regardless of subgroup, according to results published by a multicenter group of Japanese investigators.

In this substudy, like the previously published studies from which the data were drawn, the primary endpoint was a composite of cardiovascular death, myocardial infarction, definite stent thrombosis, stroke, and Thrombolysis In Myocardial Infarction bleeding (major or minor).

The proportion of patients in the 1-month and 12-month DAPT groups reaching this composite endpoint at 1 year was not significantly different among patients stratified by baseline bleeding risk or by PCI complexity, according to a multicenter group of authors led by Takeshi Kimura, MD, department of cardiovascular medicine, Kyoto University.

Both studies were conducted in Japan. DAPT consisted of the P2Y12 receptor inhibitor clopidogrel plus aspirin. The experimental arm received this regimen for 1 month followed by clopidogrel monotherapy. The control arm remained on DAPT for 12 months.

The study is potentially important because it addresses the challenge of finding “the sweet spot of antiplatelet therapy in East Asian patients,” according to the coauthors of an accompanying editorial in the same issue of JACC Asia.

Previous data suggest East Asians have a higher risk of bleeding but lower anti-ischemic benefits from DAPT therapy, explained the coauthors, Antonio Greco, MD and Davide Capodanno, MD, PhD, both from the University of Catania (Italy). They praised the effort to explore this question.

In the STOPDAPT-2 trial, the shortened DAPT regimen was associated with a significantly lower rate of a composite endpoint of cardiovascular and bleeding events than standard DAPT, meeting criteria for superiority as well as noninferiority. In the STOPDAPT-2 ACS trial, shortened DAPT failed to achieve noninferiority to standard DAPT because of an increase in cardiovascular events despite a reduction in bleeding events.

Neither of these studies specifically compared shortened to standard DAPT in patients with high bleeding risk or in patients who underwent complex PCI, which are among the most common patient groups in which to consider a modified DAPT regimen. To do this, two new substudies were performed with the combined data from 5,997 patients in the two STOPDAPT-2 trials.

In the first substudy, the 1,893 patients who met criteria for high bleeding risk were compared with the 4,104 who did not. In those with a high risk of bleeding, the proportion reaching a primary endpoint at 1 year was lower, but not significantly different, for those on 1-month versus standard DAPT (5.01% vs. 5.14%). This was also true in those without an elevated bleeding risk (1.90% vs. 2.02%).

Not surprisingly, patients with a high bleeding risk benefited from a substantially lower risk of bleeding events on the 1-month DAPT regimen (0.66% vs. 2.27%). The cost was a higher risk of cardiovascular events (4.35% vs. 3.52%), but this difference did not reach significance. Those without an elevated bleeding risk also had a lower risk of bleeding events (0.43% vs. 0.85%) but a higher risk of cardiovascular events (1.56% vs. 1.22%). Again, differences were nonsignificant. In the substudy evaluating DAPT duration in relation to complex PCI, the rate of cardiovascular events at 1 year in those treated with short versus 12-month DAPT was nearly identical (2.53% vs. 2.52%). In the non–complex PCI patients, event rates were nonsignificantly greater on the shortened DAPT regimen (2.38% vs. 1.86%), but the bleeding rate was lower on shortened DAPT whether PCI had been complex (0.63% vs. 1.75%) or not (0.48% vs. 1.22%).

In the absence of any major signal that complex PCI benefited from longer duration DAPT, “complex PCI might not be an appropriate determinant for DAPT durations,” according to Dr. Kimura and coinvestigators.

Dr. Greco and Dr. Capodanno pointed out that there are differences between patients and PCI practices in Japan relative to other areas of the world, limiting the generalizability of these findings even if the question is relevant.

“This is an approach that might be suggested for patients at high bleeding risk who have the characteristics of the patients enrolled in the STOPDAPT-2 trials,” Dr. Capodanno said in an interview. In his own PCI practice treating ACS patients, “I would not feel safe enough with clopidogrel monotherapy after only 1 month.”

He considers the ACS population to have a particularly “delicate bleeding-ischemia trade-off,” which is why he thinks this question is relevant and needs to be explored further in additional populations. However, he might design trials differently in his own practice setting. For example, he would at the very least be interested in testing a more potent P2Y12 inhibitor such as ticagrelor when considering a single antiplatelet agent after a limited course of DAPT.

One message from this study is that “bleeding risk trumps PCI complexity,” according to Deepak L. Bhatt, MD, who recently assumed the position of director of Mount Sinai Heart in New York. He liked the approach the investigators took to address a complex and relevant clinical issue, but he also expressed reservations about the clinical applicability of this subgroup analysis.

“We really need more data before uniformly shortening DAPT duration in all patients,” Dr. Bhatt said in an interview. He considers this a hot clinical issue that is likely to generate more trials. He hopes these will provide more definitive evidence of when and how DAPT duration can be reduced. Overall, he anticipates progress toward tailoring therapy in specific populations in order to achieve the best risk-to-benefit balance.