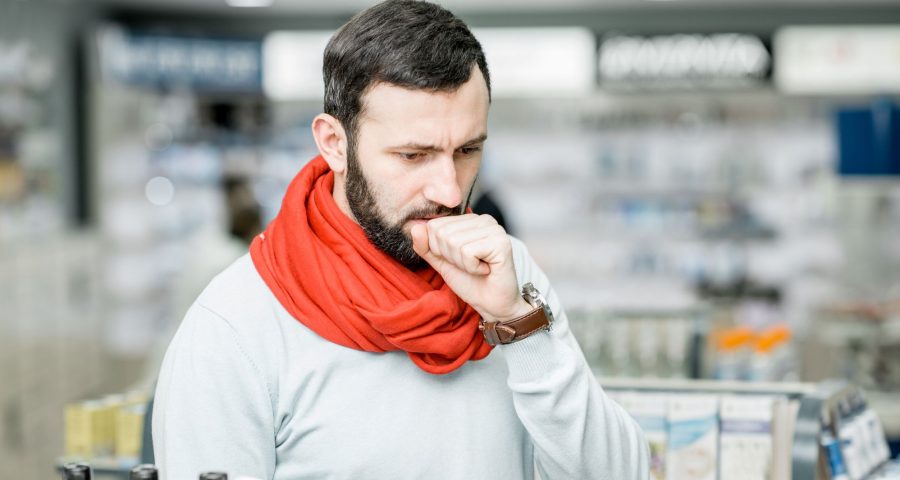 Coughs suck—and they tend to stick around longer than other cold symptoms. A 2013 study found the average cough lasts 18 days. That’s a long time to be hacking up phlegm.

“Coughing is a symptom rather than a diagnosis,” says Philip Chen, MD, otolaryngologist at the the University of Texas Health Science Center at San Antonio. “There are many reasons a person can suffer with cough and while there are remedies that can improve the cough, they don’t typically treat the cause of cough.”

Since most adults’ coughs are due to the common cold, which is caused by a virus (not bacteria), antibiotics won’t help the situation. Cough medicine also typically doesn’t work, according to multiple studies.

With that in mind, there are still some ways to get relief from coughing. Here are just a few of them.

“If your cough doesn’t go away (or at least improve significantly) after 7 days,” says Dr. Chen. If you also have difficulty breathing of wheezing, it’s time to get checked. Other serious symptoms include severe body aches, a fever over 101, rash, difficulty swallowing, or chest pain.

This will help to loosen and thin the mucus causing your cough.
“Hydration thins the secretions of excess mucus, allowing you to clear it away,” says Noah S. Siegel, M.D., otolaryngologist at Massachusetts Eye and Ear.

A 2012 study found that cough drops with menthol increased coughing threshold by 25 percent.”Menthol may provide some relief by soothing or numbing the inflamed and irritated membranes of the throat,” says Dr. Siegel. Or try one with eucalyptus, which has similar effects.

This will prevent your post-nasal drip from pooling in your throat. “It also decreases acid reflux from the stomach.,” says Chen.

“Using a humidifier thins and loosens secretions so they can easily be cleared away. In addition, when the cilia which line our airways are hydrated, they function better and move mucus along,” says Siegel.

A nasal spray can decrease post-nasal drainage that can result in coughing. Use a saline spray with an added ingredient: xylitol. “Saline with xylitol nasal spray is excellent for post nasal drip. Xylitol is also superior to saline alone since saline produces dryness and mucosal damage,” says Gustavo Ferrer, MD, pulmonologist and author of Cough Cures. Try XLear ($10.95 on Amazon, buy it here).

A study found that kids who took 2 teaspoons of honey before bed found it to be just as effective as dextromethorphan, a common cough suppressant ingredient. Try chasing it with tea or mixing it into tea.

“When given with herbal tea, there is further potential by the anti-inflammatory properties of the tea from hydration and the soothing nature of the steam,” says Siegel.

Your cough could be caused by heartburn.
“The larynx (voice box) is very sensitive to stomach acid. The voice box is irritated when acid contacts it, which can result in increased mucus, cough, and hoarseness. Even without obvious heartburn, small amounts of acid can affect the voice box,” says Chen.

If your cough doesn’t go away (or at least improve significantly) after 7 days, go to the doctor, he suggests. If you also have difficulty breathing of wheezing, severe body aches, a fever over 101, rash, difficulty swallowing, or chest pain, it’s time to get checked out ASAP.