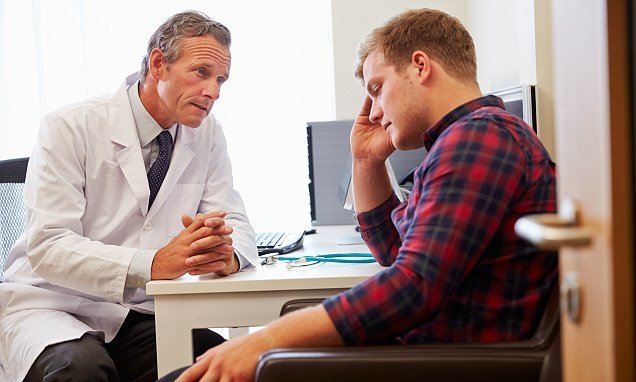 Ten-minute GP consultations are a ‘disaster’, according to the Royal College of General Practitioners’ (RCGP) vice chair.

Professor Martin Marshall claims GPs are good at making quick decisions regarding the best treatment or dealing with complex problems that require up to 30-minutes, but are less effective at dealing with ‘in-between’ issues.

Ten-minute consultations are the recommended length, however, The British Medical Association (BMA) and RCGP have repeatedly said this is inadequate considering the rising complexity of patients’ needs.

This may refer to the general population growing older and therefore suffering more complications. Ten-minute GP consultations are a ‘disaster’, according to the RCGP vice chair (stock)

JUST HOW BAD IS THE RECRUITMENT CRISIS FOR DOCTORS?

Official figures show that 41 per cent – around 10,000 doctors – are 50 or over and are expected to quit within the next five to ten years.

Fewer young doctors are choosing to specialise as GPs, and are opting for more ‘macho’ career paths as surgeons or specialists.

It came as numbers of GPs are known to be dwindling in recent years, placing even more pressure on an over-stretched health service.

Many are retiring in their 50s, moving abroad or leaving to work in the private sector, as practices have threatened to close their waiting lists until action is taken.

This continued crisis has left many patients at risk, with staff unable to cope with the rising demand and slashed funding.

The shortage of doctors comes despite the NHS adopting a plan in April to recruit 5,000 extra GPs by 2021.

Mr Hunt’s pledge of £2.4 billion was said to be the answer to the staffing shortage, helping plug the growing number of vacancies.

This money was devised to lure GPs to move to the worst-hit areas of England, and to stop them from seeking another career.

Thousands of new ‘doctors on the cheap’ are also being trained to prop up the cash-strapped NHS, it emerged in June.

An army of ‘physician associates’ will work in GP surgeries and hospitals to diagnose patients, recommend treatments and perform minor procedures.

Scores of practices also believe they are working well beyond maximum capacity – feeling pressured to take on a higher workload and risk mistakes.

‘I’m not sure it was ever adequate, but it certainly isn’t now’

‘I’m not sure it was ever adequate, but it certainly isn’t adequate now when we know consultation rates are going up and the complexity of what we’re dealing with is going up as well.

Professor Marshall added junior doctors are more excited by the prospect of dealing with complex patient issues rather than just routine visits. This comes after health secretary Jeremy Hunt announced last September that patients may one day be diagnosed by computers, not doctors.

‘Well, the first thing is we may well not be going to doctors for a diagnosis, we might be going to computers instead’.

Artificial intelligence could help in diagnosing patients by analysing X-rays and samples to determine conditions such as cancer, according to NHS England bosses.

In as little as a decade’s time, patients may even be diagnosed with disorders before they develop symptoms as DNA screening is set to become accessible to the masses, Mr Hunt said.

The future will also see patients being able to declare their wishes about sensitive subjects such as organ donation and end-of-life care through apps, Mr Hunt added.