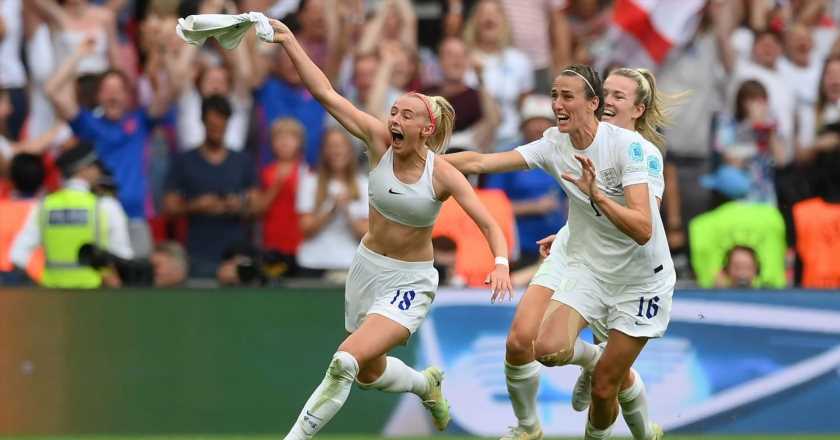 Chloe Kelly scored the winning goal for England in the Euros finals, and this is why her topless celebration is significant.

When Chloe Kelly scored the winning goal for England against Germany in the Euros 2022 final in the 20th minute of extra time, it seemed certain that football was, finally, coming home.

The crowd went wild as the ball was scrambled into the goal, but Kelly waited for a moment to check if the goal was onside before ripping off her shirt to run around the pitch – swinging it over her head as she screamed with joy.

It was a huge moment. The goal was scored just as supporters and players alike were anxiously anticipating the match going to penalties (and we know how that played out last year in the men’s Euros). But there was more to that moment than relief; Kelly’s celebration itself is being dubbed one of the most powerful moments of the tournament.

In a tweet that’s been liked over 113,000 times, writer Lucy Ward wrote: “This image of a woman shirtless in a sports bra – hugely significant. This is a woman’s body – not for sex or show – just for the sheer joy of what she can do and the power and skill she has. Wonderful. #Lionesses”

Sports and exercise doctor Amal Hassan added to the conversation saying: “Inspirational scenes – leaving me totally overwhelmed. When she chose to do this I was on my feet in total support. We love to see it and want more. Overlords of sport, hear our cry!”

To many, this may just be an image of a woman in a sports bra – a pretty normal thing to see in any gym nowadays. But within the context of the sport, it’s radical. It was a nod to American footballer Brandi Chastain who, 23 years ago, also celebrated in her sports bra after scoring a winning penalty in the 1999 World Cup final against China. The photo of Chastain on her knees in her black crop top is still hailed as an iconic image in women’s sport.

And not much has changed – while male players are cheered and championed by fans for showing off their athletic bodies, women are often sexualised or criticised the second they show skin. (It’s worth noting that Kelly received a yellow card for ‘excessive celebration’; the same rule is applied to men who take off their kit after scoring.)

Just the other day, Women’s Hour presenter Emma Barnett shared a message she was sent during the 2015 World Cup from a man saying: “No one wants to watch women’s sport… [with] ponytails swaying [and tits] bouncing.”

The dream is that the image of a woman in a sports bra is not radical. But for now, we need to celebrate these instances of athleticism without judgment or sexualisation. That’s the body that brought football home – and Kelly has a right to run it around the pitch.