There are some things that people decide to do for the simple reason that no one else has done them before. Combat veteran U.S. Navy SEAL Kaj Larsen and former U.S. Marine Raider and Military Water Survival Instructor Don Tran were feeling that energy when they decided to attempt a daring aquatic feat: carrying a 45-pound rock under the ocean for 5 miles.

“As far as I know, no one’s tried to run 5 miles with a rock underwater,” says Larsen. “We’ve spent hundreds of hours underwater prepping for this event.”

So why challenge themselves to do it? Simply to push themselves, but also to bring awareness to water and aquatics training.

“Being active underwater and accomplishing work underwater was kind of the kernel of inspiration,” says Larsen.

They also dedicated the challenge to Force Blue, a nonprofit organization that aids combat veterans returning to civilian life geared towards preserving and restoring the ocean.

Larsen and Tran designed their own ‘curriculum’ when it came to preparing for the challenge. It included lots of breathing work, including static and dynamic breath holds, and underwater exercises with weights in a pool.

“I’ve been doing a lot of dumbbell carries in the water. The current plan is to do 25 meters at a time, about 17 steps, because without markers in the ocean I won’t know exactly how far I’m going,” Tran shared in a blog post for Ten Thousand, which sponsored their attempt. “I’m going to come up and do 8 full recovery breaths and tap out with Kaj. I’m trying to do a mile a week by myself and see how far I can go. It takes about an hour but some weeks longer than that. So that’s the plan.”

The ocean, however, presents many other challenges.

The challenge itself took place in North Shore, Oahu, Hawaii. With near-perfect conditions, the guys laid out their underwater course of 100 meters that they would run back and forth to achieve the 5 mile distance. (It also included the aid of a lifeguard on duty at all times) and got started.

At two hours in, they had completed 1.5 miles.

“I’m starting to get cold,” says Larsen. “It’s way harder than I thought.” 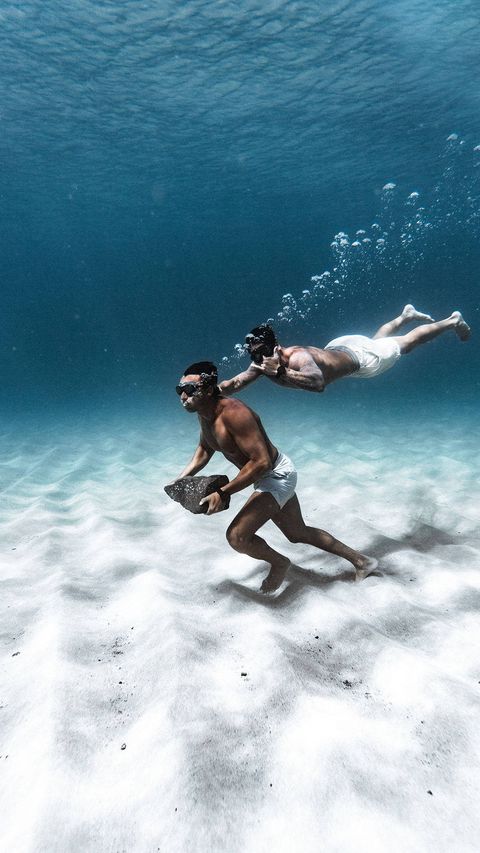 The guys push through, and with a quarter mile left, adrenaline kicks in.

“We’ve been underwater for five and a half hours,” says Tran.

For the last lap, they finish with a buddy carry—while Tran carries the rock, Larsen holds onto his shoulders.