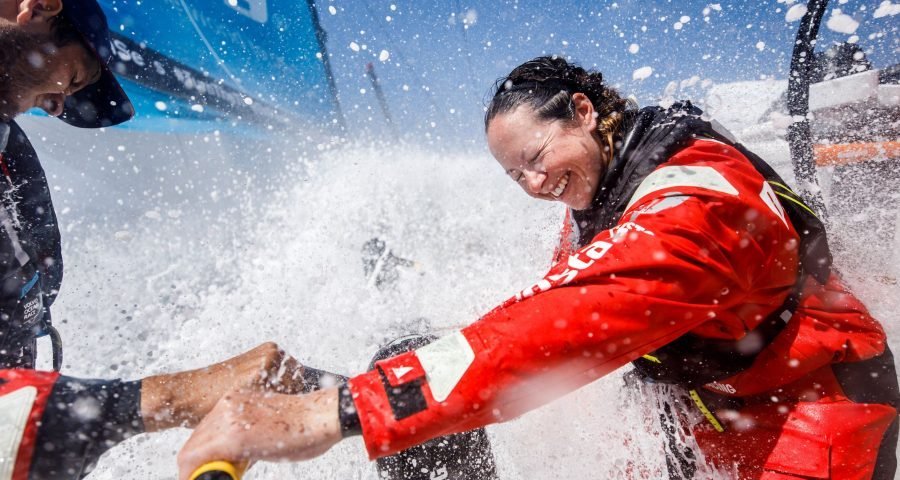 You might think of sailing as something of a leisure sport populated by blonde, tanned, topsider-wearing, gin and tonic-swilling Ivy League coeds. In reality, sailing—and in particular ocean sailing—is one of the most demanding sports in the world, a true feat of physical and mental endurance. And no ocean sailing event is more grueling than the Volvo Ocean Race—an eight-month, 45,000-mile epic trek around the globe. This year, 22 women participated, battling blistering heat and crashing waves across four oceans.

The race wraps up in The Hague, on the western coast of the Netherlands the last week in June. Meet 15 women who will sail across the finish line.

As a bowman, Sophie works the sails from the front of the boat and is often completely submerged in the surf. “It’s intense, but I love the rush,” she says.

Hannah turns one of the wheels that hoists, furls, and trims the boat’s 400-pound sails.

Abby was the only female boat captain in the race. “She’s the rock—definitely the hardest worker and the toughest person on board,” says teammate Kyle Langford.

A second-generation Olympic sailor (her mother was also a sailor, and Annalise won silver in 2016 in Rio), she was awarded the Irish Times/Sport Ireland 2016 Sportswoman of the Year.

Cécile in training during a stopover in Melbourne, Australia.

Emily, 24, was the youngest female sailor in the race.

Martine is the first Brazilian female to ever compete in the race. Shetook gold in her home Olympic Games in Rio in 2016.

Jena joined the race fresh from scooping a bronze medal at the 2016 Rio Olympics.

Bianca, on leg nine of the race, from Newport, Rhode Island, to Cardiff, Wales. She grew up watching the Volvo Ocean Race fleet race into her hometown of Auckland.

Libby comes from a sailing family—her brother Rob is also in the race.

An Olympic silver medallist, Nina has been sailing since she was able to walk. She began racing at the age of 8, and by 15 she was competing for the Australian national sailing team.

“The race is all about pushing yourself, and your boat, to the max,” says Sally.