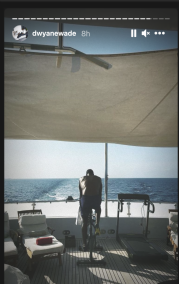 Some of us are lucky enough to have a home gym. Then there’s Dwyane Wade. The 39-year-old former NBA star didn’t get where he is—16-year career, three championship rings with the Miami Heat—by settling, so of course when it comes to a home gym, he’s got most of us beat. Because his home gym is on the deck of a yacht.

Wade’s Instagram has recently chronicled his envy-worthy vacation with wife Gabrielle Union and a number of lucky friends. The #wadesworldtour2021 and #wadeswithfriends includes a tour of the Mediterranean on a very expensive yacht, with plenty of sun and sand, and jet skiing through the ocean.

Clearly Wade and Union are enjoying themselves. But Wade, inspired by fellow former basketballer Magic Johnson, decided to bring his gym along with him on vacation—in this case, using a crane to load his exercise equipment onboard As seen in Wade’s stories, he’s got a SoulCycle at-home bike and a treadmill on the yacht’s deck, looking out over the ocean.

It’s not a bad view, and Wade, who’s previously thanked the bike and its connected classes for helping him stick to a workout routine “after all this pasta,” worked out at least long enough to take the picture. You know, in case anyone was worried that he was slacking during his luxury vacation.

If Dwyane Wade can find the time for a spin class while soaking up sun in the Mediterranean, maybe there’s still hope for the rest of us with our busy schedules. Hopefully Wade’s seaboard spinning gives you some inspiration. Celebrities: They really are just like us.