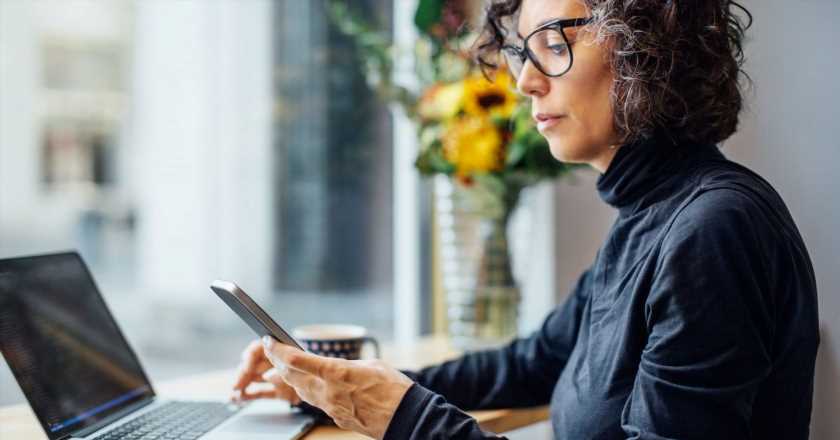 Blue light glasses are being sold as a solution to our increasingly high screen time habits. But do they work? Here’s what the experts have to say…

We all know that we should probably be trying to cut down on our screen time. Not only could spending too much time on our phones and other devices make us feel rubbish mentally, but it has a physical effect too – being hunched over and scrolling doesn’t necessarily do our bodies any good.

Blue light is part of the spectrum of visible light, and it’s a high-energy, short-wavelength light (not to be confused with UVA or UVB rays),” explains GP Dr Ross Perry. “The main source of the blue light we’re exposed to is the sun; however, we also get a significant dose from our screens and indoor lighting.”

Why eye masks, earplugs and other sleep tools can make you a more sensitive sleeper

What are the effects of blue light on health?

Because of the widespread use of tech devices, we’re now exposed to more blue light than ever, with a 2020 study published in the Indian Journal Of Ophthalmology finding that during Covid-19 lockdowns, over 32% of the study population used a blue light-emitting device between nine and 11 hours per day.

Various studies have looked into the effects of blue light on our health, including how it impacts the skin, eyes and sleep. For example, a 2014 study published in the Proceedings Of The National Academy Of Sciences Of The United States Of America suggested that when people are exposed to blue light in the evening hours, their bodies don’t release as much melatonin, which could delay and disrupt sleep cycles.

Many people believe that blue light could be damaging our eyesight and health, but the evidence to suggest that idea is limited. A 2019 study on animals found that blue light can damage cells in the retina. However, Roshni Kanabar, optometrist and clinical adviser at the Association of Optometrists, says that this study, and other similar scientific evidence, might not be totally trustworthy: “The time and intensity of exposure to blue light in these studies was far more than that of natural daylight and that of screens, so this cannot be applied to humans.”

However, Dr Perry suggests that, despite the lack of evidence, blue light could be inadvertently impacting our eyesight: “It is well known that sitting in front of the PC leads to 50% less blinking per minute (normal is 15-20 times),” he says. “This can lead to dry and red eyes, which in turn can put more strain on the eyes.”

What are blue light glasses and do they work?

One solution to the potential effects of blue light is blue light glasses, which are designed to filter out blue light. “Typically these coatings block around 20% of visible blue light,” Kanabar explains.

“Some people report that lens coatings that filter blue light make their eyes feel more comfortable or are helpful before bed,” Kanabar says. In a2017 study, 36 participants wore blue light glasses or a placebo, and researchers found that those who wore the blue light glasses for a two-hour computer task experienced less eye strain, eye itching and eye pain compared to those who did not.

However, this was a very small study and Kanabar stresses: “There is no clear evidence to support that these kinds of coatings prevent eye disease such as age-related macular degeneration.”

Eyesight aside, given that one of the biggest worries around blue light is its disruption to our bedtime (because we all know the impact of a bad night’s sleep), should we be wearing them? Dr Perry says that there is limited research.“There is just not enough research to have a full understanding of the damage blue light actually does and what can be blamed on lifestyle choices,” he says. For example, you might think the reason you feel tired the morning after binge-watching a Netflix series is down to blue light exposure. But perhaps it meant you went to bed later than normal or were over-stimulated by the series and couldn’t sleep as a result.

Given that, it’s probably best not to fork out a lot for something that is potentially under-studied. But if blue light glasses have a positive impact on you, there’s seemingly no harm in wearing them.

Kanabar recommends prioritising getting regular sight tests, at least every two years, especially if you’re experiencing tension headaches or eye strain after looking at a screen. If you are going to buy blue light glasses, she recommends that you speak to your optometrist or optician first, as they will be able to advise you on products that best suit your needs and lifestyle.

When it comes to sleep, avoiding screens and light in general is probably the best way to look after your mental and eye health.