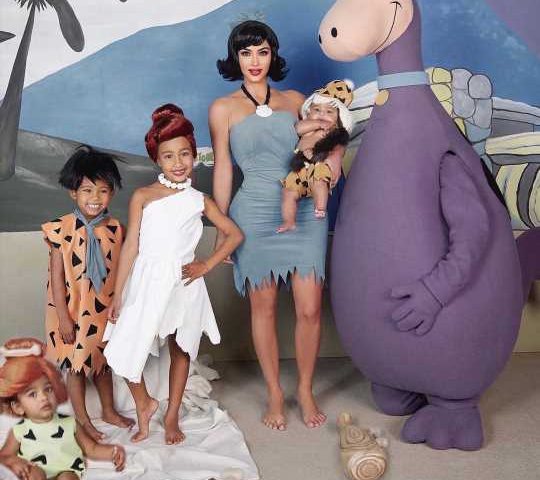 They’re a page right out of history!

Kim Kardashian West and her brood went all out for Halloween this year, topping off their already-impressive array of ensembles with a group costume that blew the top off of Bedrock and beyond: The Flintstones!

Son Saint, 3½, and daughter North, 6, led the group as Fred and Wilma Flintstone, respectively, while their 21-month-old little sister Chicago donned a red wig with a faux bone as their daughter, Pebbles.

Then came Kardashian West, 39, looking perfect as Betty Rubble with a tiny Bamm-Bamm in her arms — expertly played by 5-month-old son Psalm.

Arguably the most committed to his character? Dad Kanye West, who was completely covered by a head-to-toe Dino costume to portray the Flintstone family pet as he posed with his wife and children against a prehistoric backdrop.

Here’s Every Costume the Kardashian-Jenner Family Wore This Halloween

Fans may have noticed Chicago’s presence in the group photo doesn’t exactly look natural — and for good reason.

“This family pic was such a challenge because Chicago was so scared of Dino! LOL We tried to explain and show her that it was just daddy but she didn’t get the concept yet! So shout out to the photographer for editing her in & making our family [Flintstones] dreams come true!” Kardashian West captioned her family snapshot.

She wrote alongside two other slideshows of photos showing off the group’s fun outfits, “Flintstones 🦴” and “Yabba Dabba Doo!”

Both Kardashian West’s immediate and extended family are known for pulling out all the stops come Halloween, from parties to their costumes.

On Thursday, the Keeping Up with the Kardashians star and beauty mogul — who’s studying to be a lawyer — unveiled the first of her inspired get-ups, where she channeled Elle Woods from Legally Blonde.

As for daughter North, the little girl had already joined her cousin Penelope Scotland, 7, and a pal as a devil (for North), and angel (for their friend) and a creative in-between option (for Penelope).