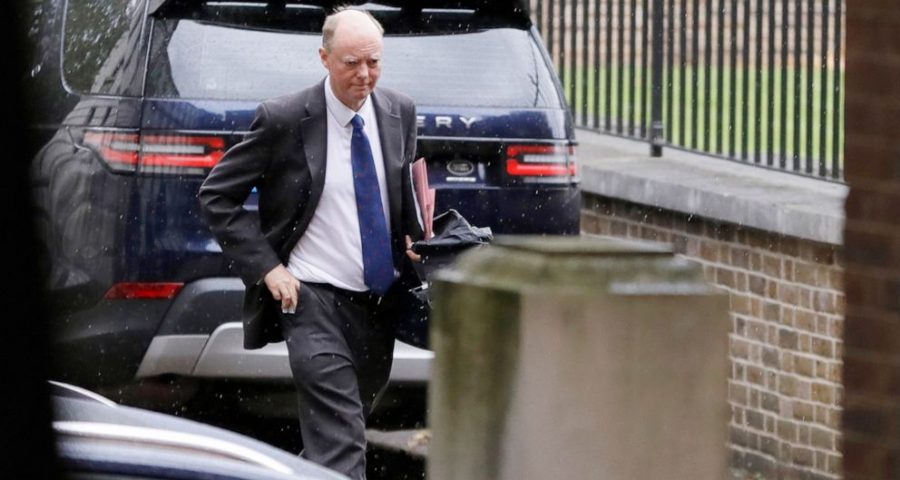 LONDON — British police said Tuesday that they are investigating the circumstances around the seeming harassment and intimidation of England’s chief medical officer by two men in a park in central London.

The incident, which was captured in video footage and shared on social media, shows Prof. Chris Whitty struggling to get away from the pair, who appeared to be manhandling him while trying to take a selfie.

British Prime Minister Boris Johnson condemned the “thugs” accosting Whitty, who has been one of the most prominent voices during the coronavirus pandemic.

“I’m shocked at seeing the despicable harassment of chief medical officer Chris Whitty,” Johnson said. “I condemn the behaviour of these thugs. Our hard-working public servants should not have to face this kind of intimidation on our streets and we will not tolerate it.”

The 20-second video shows the two grinning men grabbing Whitty as they shout “Oi oi” and ask for “One photo please?” As the clearly perturbed Whitty attempts to walk away, the men try to grab him again.

With a line of police vans visible in the background, a voice is heard saying “leave the gentleman alone” before the clip ends.

London’s Metropolitan Police said in a tweet that officers spoke to all those involved at the time and that their details had been taken.

“We are in contact with the victim and the circumstances continue to be investigated,” it said.

Home Secretary Priti Patel said she was “just horrified” by the incident and that officials are looking at support available to Whitty.

“It’s terrible to see such an important public figure, someone that day in, day out, has been serving our country in the way in which he has to keep us safe, being subject to just appalling abuse,” she said on Times Radio.

It is not the first time Whitty has been forced to endure public harassment. During the pandemic, Whitty has become one of the most visible public faces , often hosting press briefings alongside Johnson and the government’s chief scientific adviser, Patrick Vallance. While he has undoubtedly become one of the most trusted voices, he has faced the fury of lockdown skeptics.

Earlier this month, he was confronted in a street in Oxford by a man accusing him of lying to the public about the virus, while in February a man accosted him near Parliament. Both incidents were filmed on mobile phones.

Whitty brushed off the February incident, saying he was sure the person involved would “become a model citizen in due course.”