When Josh Sakhai first went off to college at New York University, he was tempted to get a tattoo as an act of rebellion against rules his parents had set for him growing up. But a fear of needles, fear of commitment (to eternal ink), and some off-putting experiences with not-so-welcoming tattoo artists made Sakhai delay getting his first tattoo.

While in college, Sakhai met future cofounders, Vandan Shah and Brennal Pierre. They asked him one question that would soon change the future of tattooing: "Why are tattoos permanent?" Over the next six years, the trio (and later CEO Jeffrey Liu, who was brought onto the team in 2020) thoroughly researched the answer to that question and created a brand-new alternative with the opening of Ephemeral, a tattoo studio in Brooklyn, specializing in tattoos that disappear after about 9 to 15 months.

The Ephemeral team does not want you to confuse them with "temporary tattoos," however. "Our ink is real tattoo ink that's applied by real tattoo artists," Sakhai says. "It works just like any other tattoo ink, so artists will use their actual machine and equipment." Instead, Sakhai and the rest of the crew refer to Ephemeral's tattoos as "made-to-fade."

Ephemeral's revolutionary ink took more than six years and 50 formulations to create. Shah and Pierre tapped their Ph.D.s in chemical engineering for the lengthy development process. The exact ingredients are top secret, but Sakhai reveals the black ink is composed of "medical-grade bioabsorbable and biocompatible polymers " with "high-quality pigments." Over time, the ink breaks down and the particles become small enough to be eliminated by the body, leaving your skin tattooless once again.

According to experts Allure spoke to, this shop is doing something that's pretty much unheard of. Roy Geronemus, a New York City-based dermatologist and the director of Laser & Skin Surgery of New York says that some of the closest technology to the ink he has seen is henna, which typically fades after one to two weeks like other temporary tattoos, as well as the ink used in microblading, which typically lasts for a year. He hasn't encountered Ephemeral's semipermanent ink, though. 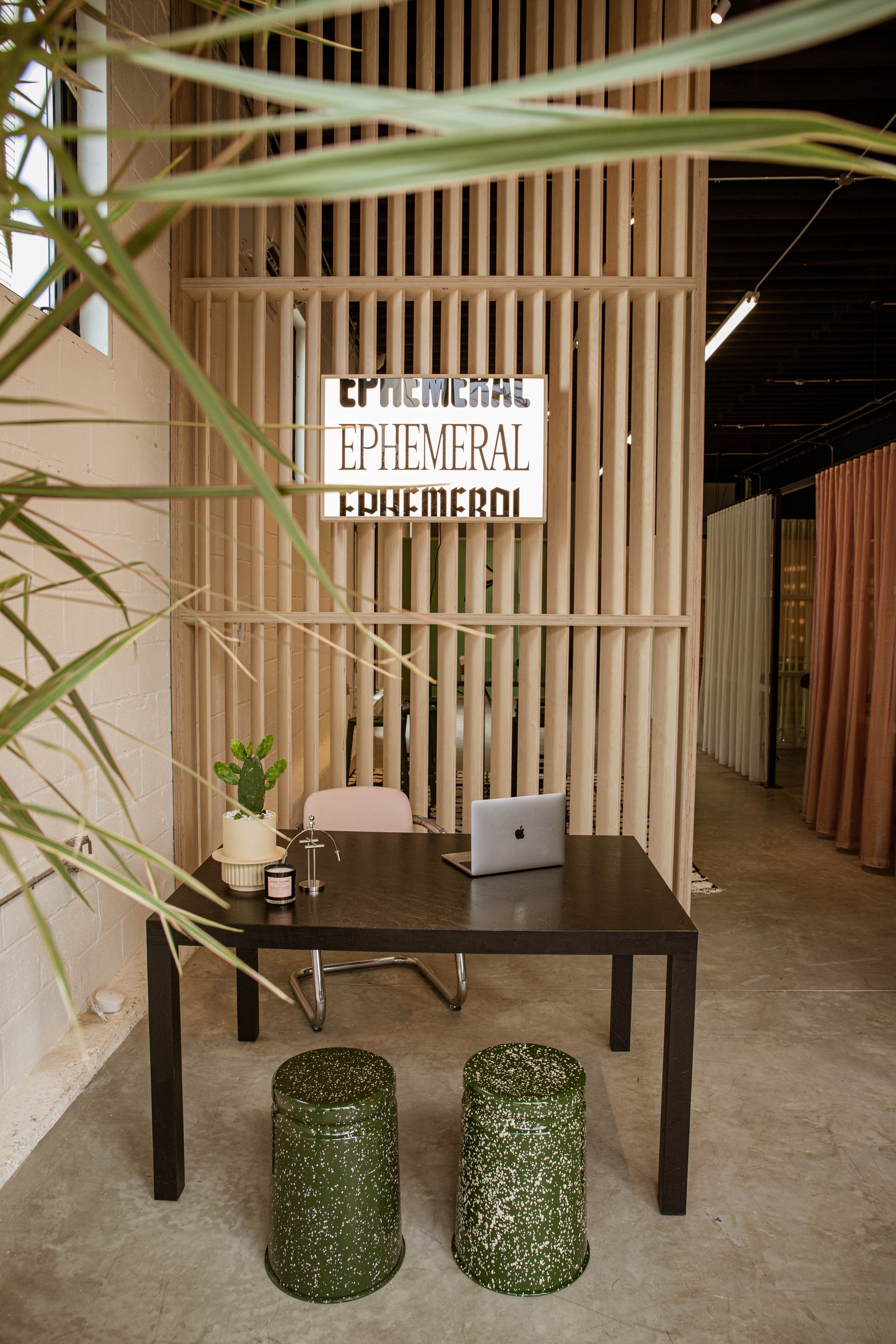 The process for booking your appointment and getting the tattoo is pretty similar to traditional parlors. First, you have to reserve a spot with a $20 deposit, which is refundable and applied to the total cost of your service. Then, you'll receive an email with available times for your appointment. After booking, you'll be asked to fill out a quick survey where you can attach any ideas and photo inspiration you may have.

Allure.com's beauty editor Devon Abelman recently went through the process and attests to how easy the booking and planning stages were. "I sent over reference images of the vintage cake I wanted on my arm, and my artist, Marissa, drew up exactly what I had in mind," Abelman says. 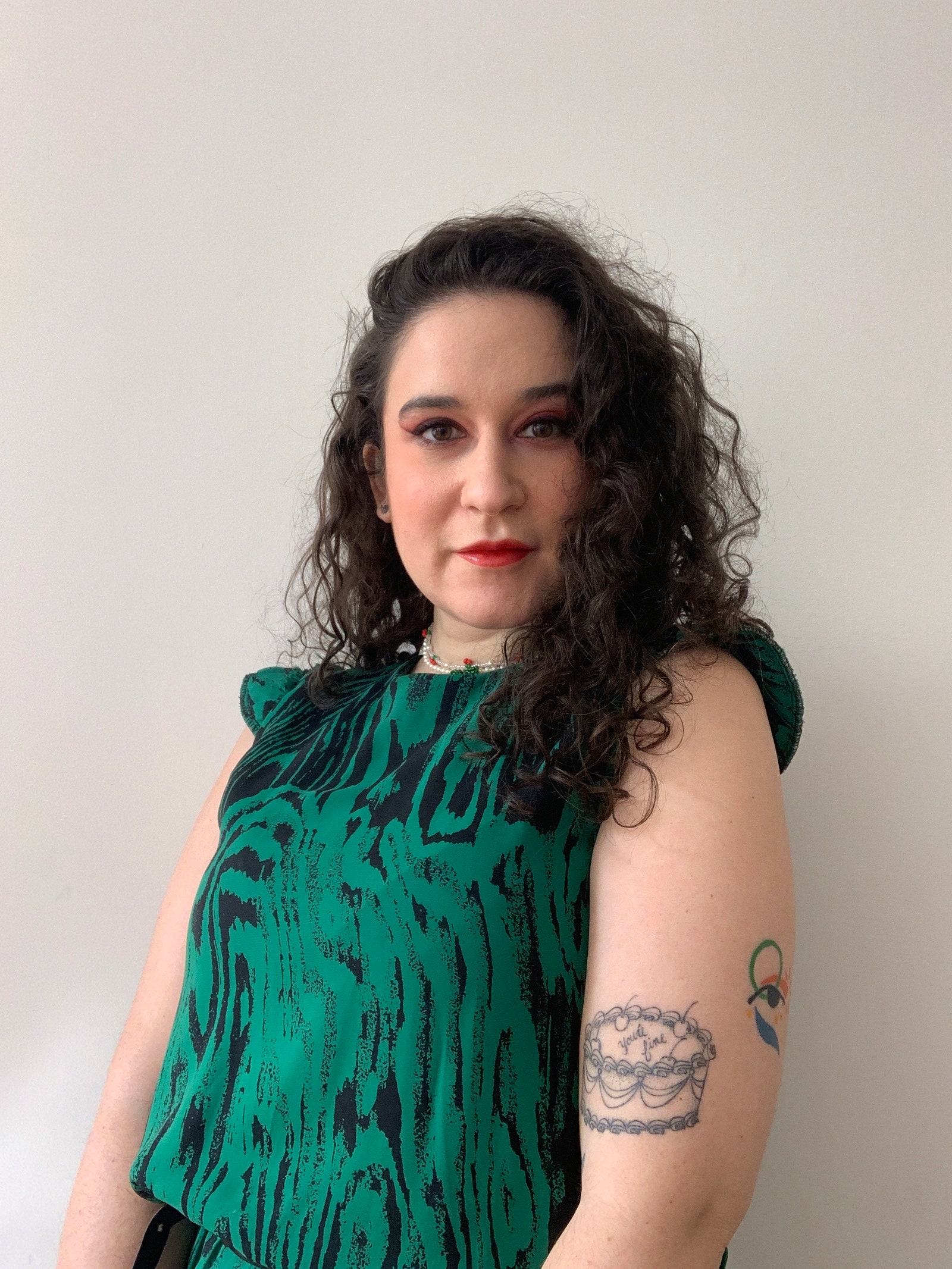 You can customize your design as much as you like — with some limitations. At the moment, Ephemeral's ink is available only in black, and [the artists recommend picking art that doesn't require shading to ensure that your tattoos fade as evenly as possible. Though there aren't any immediate plans for color ink, Sakhai says it's all up to the studio's clients. "We started off with black ink simply because that's what people wanted," he adds. "If we hear from our clients that [they] want color, we will make color."

Additionally, the hands or feet aren't recommended as locations for the tattoos because both areas tend to fade more quickly, even with traditional ink. In general, the tattoo artist will work with you to ensure your body art is placed in the optimal spot. "I knew I wanted my cake tattoo to be on the front of my arm, but Marissa expertly helped me figure out the perfect placement for it so it fits in well with the rest of the tattoos on my arm," Abelman says. "She also prepared two different sizes for me to choose from and welcomed any changes I had in mind." 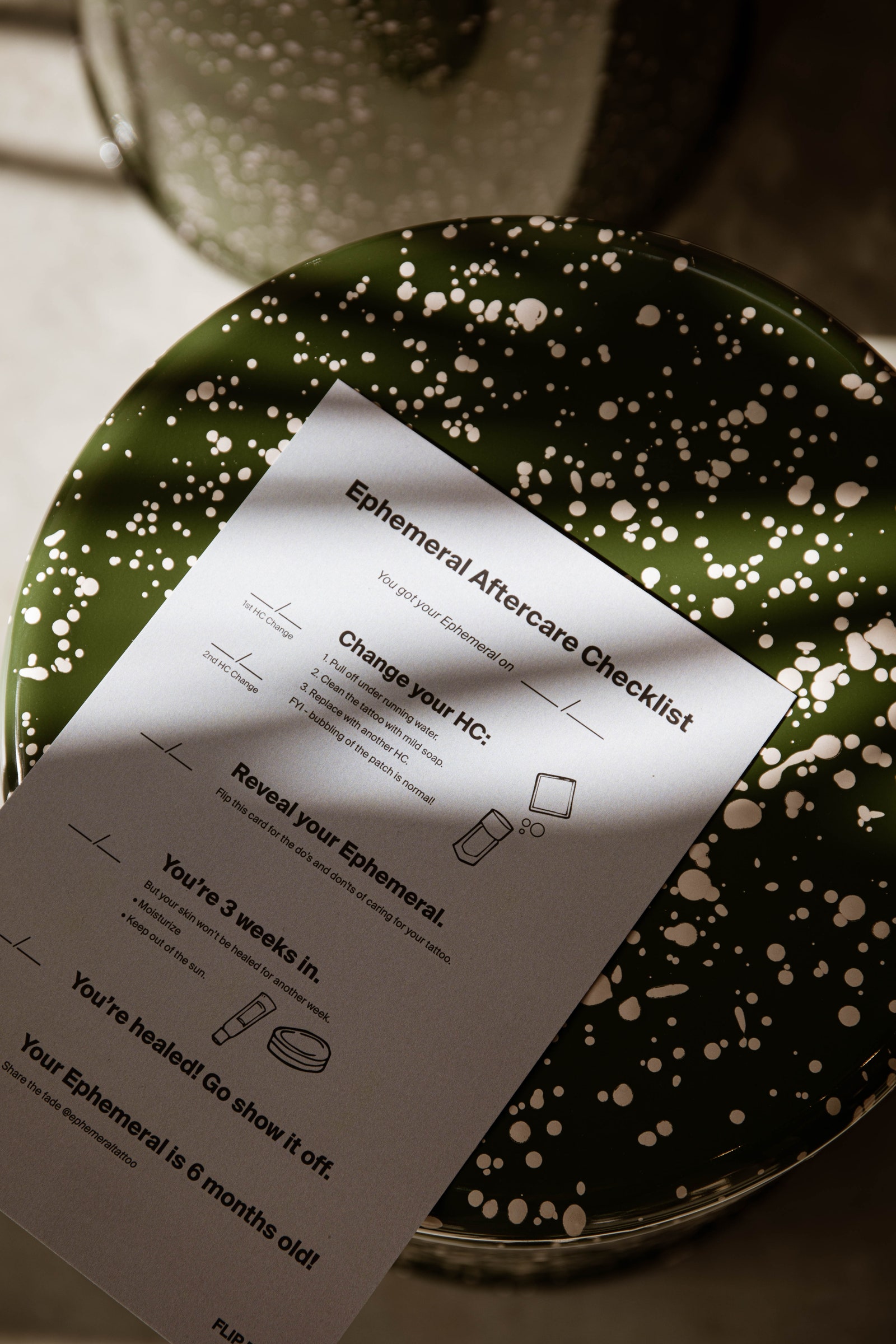 Unfortunately, the made-to-fade ink doesn't lessen the pain of getting a tattoo. Abelman already had several traditional tattoos, so she knew what to expect. "Of course, it hurts as much as any other tattoo. The same kind of needle and machine are involved," she says. For her, "the pain level is comparable to getting extractions during a facial."

After the appointment, you'll be sent home with a goody bag that contains a Polaroid photo of your new tattoo and aftercare products (specifically Green Goo Tattoo Care, Aveeno 1% Hydrocortisone Anti-Itch Cream, and Dr. Bronner's Unscented Pure Castille Soap) to ensure that everything heals well. You'll also get a copy of the shop's Aftercare Checklist (above), which helps you track the healing process well after your appointment. All are included in the price of your tattoo, which starts at $175 for small and simple designs, and $350 for larger, statement pieces. Also, Ephemeral tattoo artists are paid a salary, so their tip is included in the price. 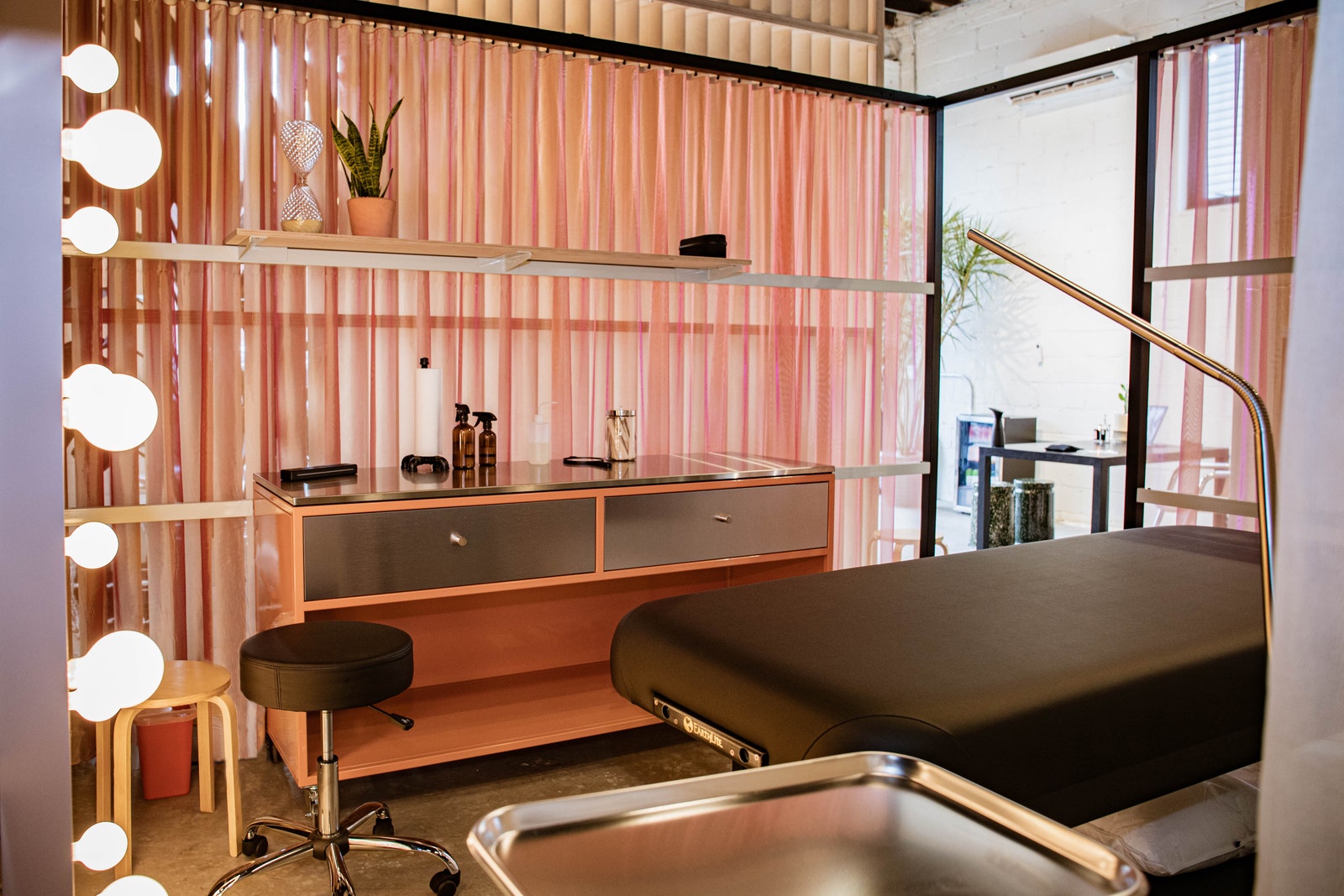 The main issue that Geronemus anticipates with Ephemeral tattoos is the potential for disappointment as the tattoo begins to vanish. "As it fades, it's going to look washed out, which may not be necessarily appealing," he says. But in the event that someone wants to remove the semi-faded tattoo even quicker, Geronemus has faith that laser removal will work just fine with Ephemeral's ink.

If you're considering a made-to-fade tattoo, then hopefully you're well aware it will start looking dull over time, a sentiment Abelman seconds. "I knew exactly what I was getting into," she says. "I went into this knowing I wanted to test out what it would be like to have a tattoo on the front of my arm. I usually place them in less conspicuous places, but lately, I've been curious about getting a full sleeve and showing off the tattoos prominently. Ephemeral has just proved to me how amazing tattoos look, no matter where on my arms I get them."

Tina Alster, a board-certified dermatologist and founding director of the Washington Institute of Dermatologic Laser Surgery, is a bit more hesitant about Ephemeral's ink and warns of potential scarring or allergic reaction to tattoos. Though the risk for both is small, she says people should be aware it's still possible with made-to-fade as well as traditional tattoos. But with black ink, in particular, the risk is actually pretty rare, according to Geronemus. Make sure to follow your tattoo artist's aftercare advice, and contact a board-certified dermatologist if you're worried about a possible infection or reaction. 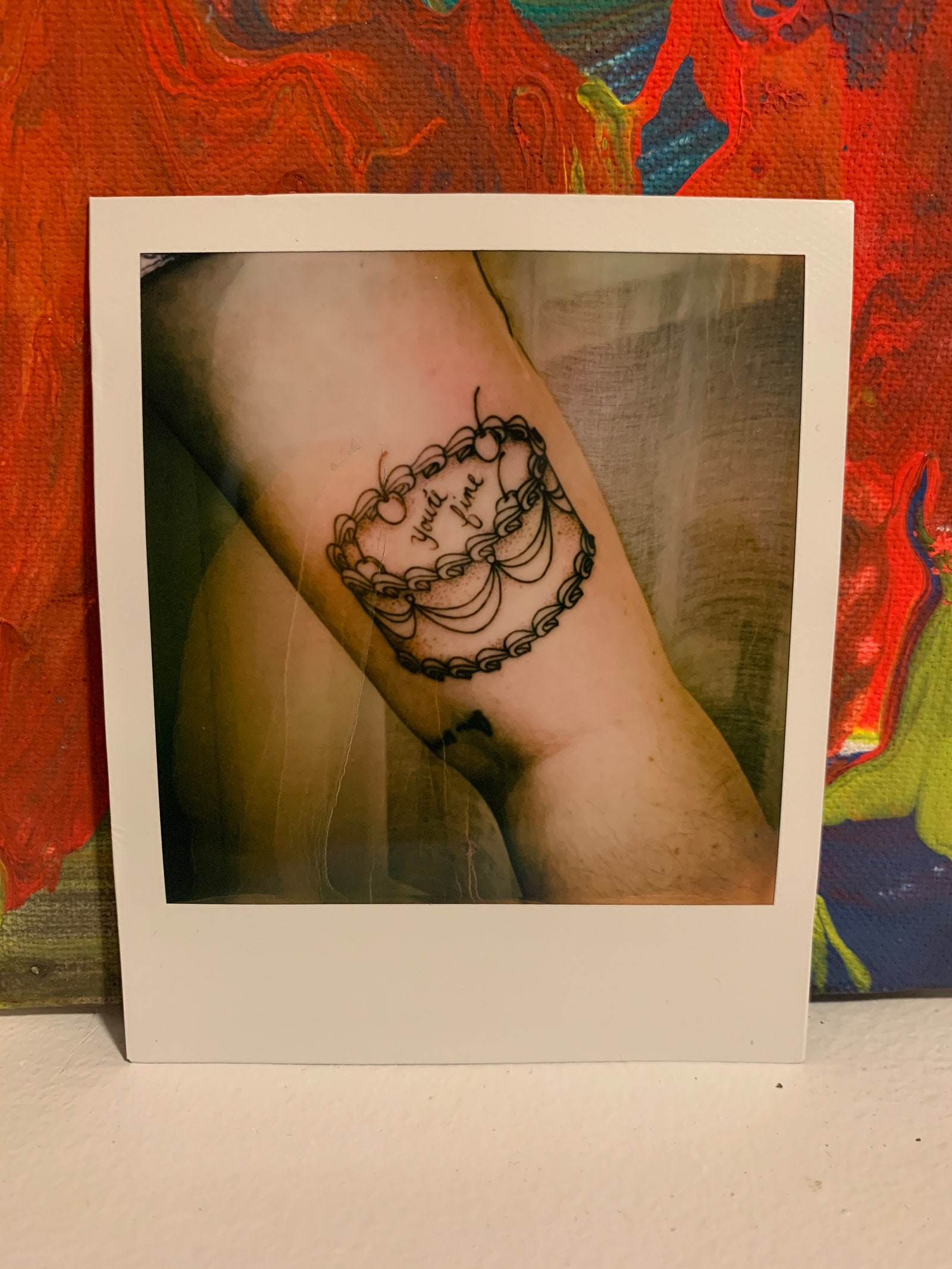 Abelman points out that you can expect your Ephemeral tattoo to itch much like a mosquito bite as it heals, just as a standard tattoo will. This is completely normal and part of the process. It may feel raised too. Don't worry, the texture will smooth out over time.

Most of all, Ephemeral's ink allows people to flex their creativity with tattoos, knowing they will decorate their skin for only about a year. Without a lifelong commitment, you can take a bigger risk with daring body art. “As Marissa was finishing up my tattoo, she said that she anticipates tattooing lots of couples with each other's names or matching art,” Abelman says. “I can't wait to check in with her in six months or so to see if she was right.”