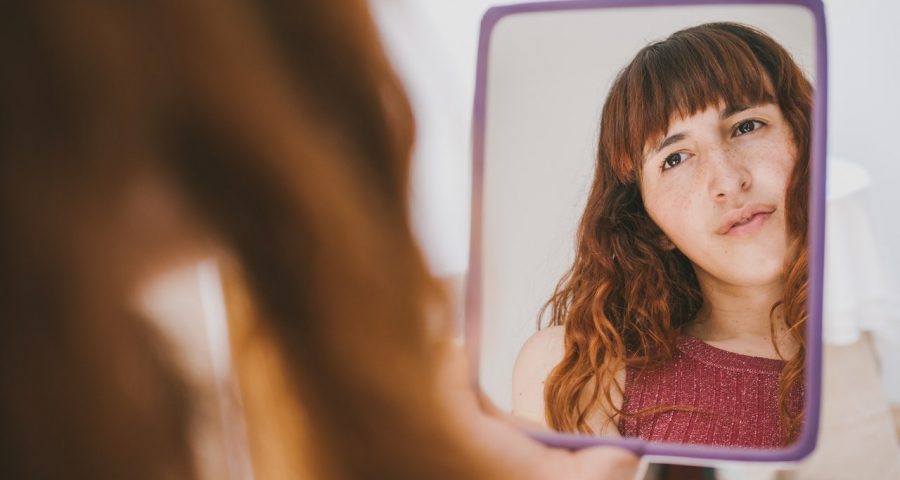 Get ready for a new term in your skin-care lexicon: psychodermatology. In the imaginary Venn diagram of daily struggles, it's the practice that addresses the area where the factors that impact mental health and skin conditions overlap. The idea that that cross-over can be significant is something the country is starting to wake to. Our mental state impacts our bodies from head to toe. In fact, our mental health can factor into everything from psoriasis and eczema flares to acne to skin picking to even a loss of collagen. Yes, you can at least partially blame stress and anxiety for all that and more.

Currently, psychodermatology is considered a niche practice in the United States with established clinics devoted to it only found in seven U.S. cities (Rochester, NY; New York City; Tampa; Saginaw, MI; Madison, WI; Kansas City, KS; and San Francisco), according to the Association for Psychocutaneous Medicine of North America (A.P.M.N.A). But lately, it's been popping up in newspaper articles and even inspiring new skin-care lines — like Loum, based on the ingredient neurophroline derived from wild indigo, which the brand claims reduces cortisol levels in the skin.

The obvious answer for the boost in interest in blending the practice of dermatology and psychiatry is the COVID-19 pandemic, which both ushered in renewed enthusiasm for skin care — thanks to concerns like maskne and the fact that many people were skipping makeup in favor of bare skin — and sent stress levels through the roof. But awareness was building before the virus hit. Of the studies that mention the word in the National Institute of Medicine's Library of Health, almost a third were published in the last three years. And the A.P.M.N.A also reports that it's seen attendance in its annual meetings grow over the years with more doctors becoming aware of the practice.

All this adds up to a big question: Should you hunt a psychodermatologist down for yourself? Here, a look into how it works.

Psychodermatology centers around the same basic premise as dermatology of addressing skin concerns. But there's also a mental health aspect involved that's largely focused on stress and anxiety. Some of the doctors practicing it even have dual degrees in dermatology and psychiatry. It's used to treat the four kinds of psychopathology: Depression, anxiety, obsessive behaviors, and delusions.

Obsessive behaviors can be seen in repetitive disorders like trichotillomania (the so-called "hair-pulling disorder"), while an example of delusions would be delusional parasitosis, in which people falsely believe their skin is infested by parasites or insects.

But it's the first two types — depression and anxiety — that may have more universal implications. While psychodermatology can be used to help address psoriasis, eczema, hyperhidrosis, and alopecia, the benefits can go beyond that to even more common worries like acne and age-related concerns. That last one may come as a surprise, but according to Amy Wechsler, a dermatologist and psychiatrist in private practice in New York City, a reduction of stress boosts collagen production which can plump lines and wrinkles and help cell turnover. "[You remember] what it feels like to go on vacation and people at work are like, 'Wow, you look great?'" It's proof, she insists, that in just seven days of tackling stress, she says, "you can see it on your skin."

What does psychodermatology entail?

The practice includes the same familiar topicals and treatments that you'll see at a traditional dermatology practice, but with the addition of other strategies as needed, including interpersonal therapy, cognitive behavior therapy (meant to address distorted thoughts that could be adding anxiety), hypnosis (which has some evidence that it could be beneficial for certain skin conditions, including warts), as well as recommendations for sleep hygiene and mind-body practices like meditation and yoga. And, if it's appropriate, there may also be a psychological medication prescribed, such as serotonin reuptake inhibitors, if the patient exhibits symptoms of depression that could be a contributing factor to the state of their skin.

The effects can have far-reaching impacts on quality of life. Mohammad Jafferany, executive director for the A.P.M.N.A. and clinical professor of psychodermatology at Central Michigan University College of Medicine, explains that dermatological disorders "are complicated by low self-esteem and social isolation" which may mean patients "may have guilty feelings; they are depressed, and many have some suicidal ideations as well." That's why, he says, treating the patients holistically can be key. "The combination of this treatment — medication plus therapy — it helps a lot."

"The mind is very tightly linked to the skin, particularly through the sensory nerves that reach the very superficial surface of the skin," explains Francisco Tausk, dermatologist, past president of the A.P.M.N.A., and head of the Center for Integrated Dermatology. "These nerves release into the skin small neuropeptides that have a very strong influence on cutaneous physiology and how the skin behaves in health and disease." Some of these neuropeptides: cortisol, adrenaline, and substance P.

Wechsler takes the example of cortisol, which when chronically raised, can cause a host of problems including inflammation and collagen breakdown. What that can lead to: "Premature aging, acne, eczema, psoriasis — you name it. The skin barrier doesn't work well, so you get more sensitive to allergens." In other words, she says, "All sorts of bad stuff happens."

And it can become a bit of a chicken and egg question. While we know stress can exacerbate certain skin symptoms, the fact is that having skin symptoms can also stress someone out. Says Jafferany, "If somebody has a pre-existing skin disease, they can get way more stressed out because of [it]. The same mechanism comes into play — they get aggravated, and then these stress hormones raise the inflammatory mediators and make things worse." It turns into one big cycle.

Why has psychodermatology been slow-growing in the U.S.?

Psychodermatology is more common in Europe and South America, and Tausk has a theory as to what has held the practice back in the States: Our penchant for quick fixes over long-term personal growth, and a health system not set up to reimburse the blend of practices.

Tausk gives an example in which he created a group for skin pickers. The patients received care that included CBT, mindfulness meditation, yoga, and hypnosis. "Most did very well, but we could not continue because the process for the psychiatrist to get reimbursed was so cumbersome, and the requirements of the different insurance carriers so burdensome," he says.

Jafferany explains that this is partially because psychodermatology isn't recognized in the States the way it is overseas — and patients run into trouble having the care approved by their carriers at all. "Although recently few of the psychodermatological disorders have been classified in ICD (International Classification of Diseases) and DSM-5 (Diagnostic and Statistical Manual of American Psychiatric Association), still several are lacking descriptive terminology, causing insurance denials," he says.

All this means the experience will likely cost more out of pocket, so it's not financially realistic for everyone. To avoid the hassles that often hold the practice back, Wechsler opts not to accept insurance. But some doctors may be able to work with those on a budget. For example, after Tausk found the cost coverage for hypnosis for chronic itch patients to be unsustainable to many, so he says, "I do it on my free time and don't bill for [it]."

If you're already seeing a dermatologist and a therapist separately, chances are, of course, that it would be more cost-efficient to combine the appointments: When compared to doing the two disciplines of mental health therapy and dermatology separately, one 2016 research review concluded that the blended therapy not only increases "patient convenience but also ultimately result[s] in lower health care costs and improved outcomes."

Psychodermatology appointments, just like separate appointments in either field, are highly individualized, depending greatly on the doctor's practices and the patient's needs. For example, Wechsler prefers to send her patients to outside specialists when psychological medications are needed, and instead focuses her own practice largely on active listening therapies. Other practices offer additional psychology-based strategies within the practice itself.

Regardless, you'll still walk away with a regimen. It just may be a little longer and touch on more disciplines than you might be used to discussing with your derm. And that may include more in-office work and even homework, like doing yoga a couple of times a week.

So, do you need a psychodermatologist?

Since this is an emerging field in the U.S., finding a practitioner will be tough unless you happen to live in one of the seven cities that have a practice devoted to it (and even then, appointments can be limited). Stressing about that scarcity won't help the cause, but here's something to keep in mind: You also don't necessarily have to have one doctor overseeing your care to see the benefits of blending mental health practices with traditional skin-care strategies. If you have the means — or an uncharacteristically good insurance plan — you can book appointments with both a mental health expert and a doctor and blend their strategies and advice on your own.

And dealing with elevated cortisol levels on your skin may get easier as interest increases and experts and brands find ways to address it. Loum founder Kat Bryce sees potential for us all to benefit as the U.S. wakes up to the link between mental health and our complexions. After developing her line with insights from Tausk, she and her partners are believers. "Now we see the fundamental impact of stress on skin, we hope more developments will come in this space as the need is enormous and the opportunity for effective solutions vast," she says.