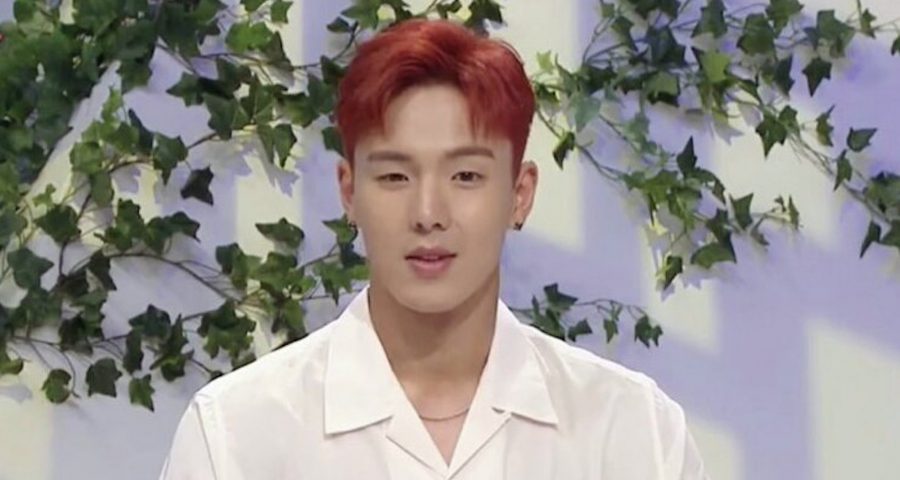 Since debuting in 2015, Korean pop star Shownu hasn't partaken in a major aspect of K-pop, one that his fellow members of Monsta X have thoroughly embraced. The septet may perform the same catchy songs, learn the same complex choreography, and live in the same dorm, but unlike Wonho, Minhyuk, Jooheon, I.M, Hyungwon, and Kihyun, Shownu has never dyed his hair a bright color — until now. On Monday, Monsta X's leader revealed his new crimson hair color when he appeared on a South Korean TV show MBC Section TV. Wonho later posted selfies with Shownu on Twitter showing off his new look for Monbebe (as Monsta X fans are officially called). In just a couple hours, the pictures racked up thousands of likes.

Shownu's new dye job marks the first time he has ever tried out rainbow hair. Over the past three years, he's stayed in the natural family with brown, black, and blonde hues. Now, he's hopped on the K-pop trend of constantly changing hair colors. Could pink or purple be his next hue?

In shownu's 3 years as an idol with variants of black and brown dyed hair, SHOWNU FINALLY HAS RED HAIR!! pic.twitter.com/1InQ2Wgx9r

While interviewing Monsta X back in July, I planned to ask the members what their dream bright hair color was but ran out of time. Maybe Shownu's answer would have been red.

The rest of Monsta X are quite familiar with the world of rainbow hair. They've experimented with every shade of ROYGBIV besides yellow. (Could that be Jooheon's next hair color? Maybe Wonho's?) With that in mind, every member but I.M has experimented with red hair in the past. They'll be able to tell Shownu all about what it takes to upkeep his new bright hue.