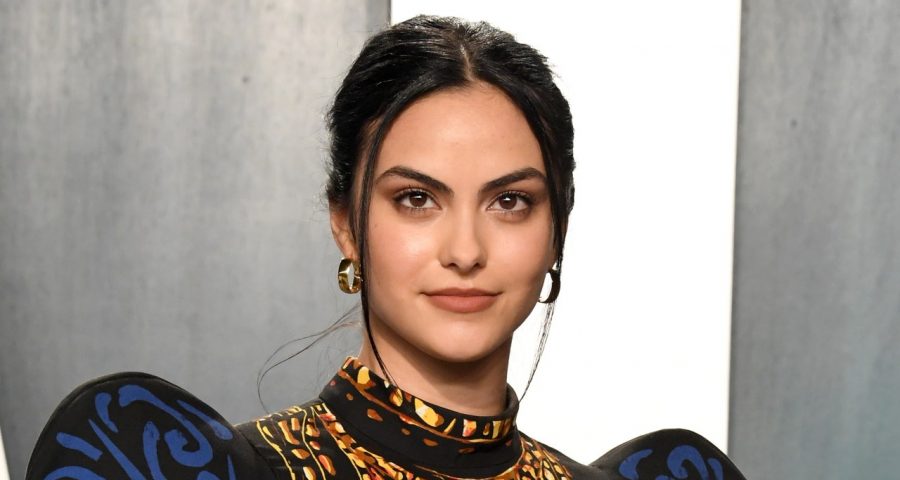 Riverdale's Veronica Lodge has had it pretty damn rough over the past four years — her dad's in and out of prison, death and chaos have perpetually haunted her town, and then there's all that (less important) Archie stuff, too. Camila Mendes, the actor bringing Veronica to life on screen, is, on the other hand, totally thriving. Alongside earning the affections of millions with her take on the retro comic-book character, she's also starred in five films since 2018 and landed multiple partnerships with beauty brands, like Secret and Urban Decay.

Over the phone, Mendes speaks in the same deep and even-tempered tone we're used to hearing on TV — but I soon learn that these two women have just as many differences as they do similarities, especially when it comes to their respective outlooks on beauty. Off-camera, Mendes loves quality self-care time just like Veronica probably does when she's not tracking down serial killers or teenage drug dealers.

After a long day on set or any other event that requires lots of makeup, you can find her indulging in some serious skin care. "If I'm not coming home too late and have a little time before bed, I'll hop in the bath and do some masks in there while I can," she says. "I like to use Renée Rouleau's Triple Berry Peel for about 10 minutes; after I wash that off I'll put on her Rapid Response Detox Masque and have it on for 15 minutes." (Not shocking — Rouleau is also a favorite of costar Lili Reinhart.) She relies on her favorite playlists and Lush Cosmetics' well-loved bath bombs for a hyper-relaxing and sweet-smelling soak.

On her increasingly rare days off, Mendes prefers to let her skin breathe, makeup-free — but that doesn't mean she's opposed to getting "dolled up" every now and then. "I'll put on some foundation — in my case, Hydromaniac by Urban Decay, because it's light but still gives a good amount of coverage —  then if I'm feeling I just want it to be really natural, I'll use the nude tones from the Naked Wild West palette," she says. More often than not, she'll apply a subtle wash of color all over her eyelid. "Then I brush my eyebrows up, put some mascara on, and call it a day." (to reiterate: Mendes is a spokesperson for Urban Decay.)

The pandemic, and the lack of social outings it's caused, has Mendes itching to try more new things with makeup, though. "There are not many occasions to [experiment with makeup] these days, but I'll find any excuse," she jokes, aware of the stark contrast between her and Veronica, who never strays from petite black eyeliner. Lately, she's been looking to makeup tutorials by professional artists for inspiration. "One [makeup artist] did this really fun mixture of different pink gel eyeliner pencils where she applied a cat-eye on top and the bottom, then smudged them together — that's something I've tried to do with different colors, recently with purple hues, and it's really nice."

Colorful, graphic eyeliner with lots of negative space, from what she tells me, seems to be what tickles her fancy most. If you're looking for great eyeliner pencils to try this with, Allure editors recommend Merle Norman Soft Touch Eye Pencils or Make Up For Ever Aqua XL Eye Pencils.

Don't get Mendes started on her hair, either — that's something she very much wants to experiment with but can't, thanks to her job. Even though Veronica's look has evolved with the show's recent time jump (she traded waves for a straight blowout), Mendes is still beholden to long, dark hair. That won't change for a while, by the looks of it. "As long as I'm on Riverdale, I have to stay pitch-black, but I don't know what I'm going to do when this is all over," she ponders. "It really depends on what role I'm going to play next; I always like to think of how I can make myself look different from my last role through my hair."

If she could undergo any dramatic hair transformation with no consequences, she'd cut most of it off, like, tomorrow. "I've always wanted to do an above-the-shoulder bob. I love the low maintenance of it… [and] I think would be really fun and chic," she says. "But in a few years' time, who knows what I'm going to want to do?”

Camila, if you're reading this, might we suggest taking after Clifford Blossom? Start a wig collection, we mean. Not, uh, you know… the homicide. All we're saying is that colorful graphic eyeliner would pair extremely well with a commitment-free brunette bob — or blonde ringlet curls, or maybe even a colorful pixie. If and when that ever happens, we (and your millions of other fans) will be waiting with bated breath to see you in a whole new way.