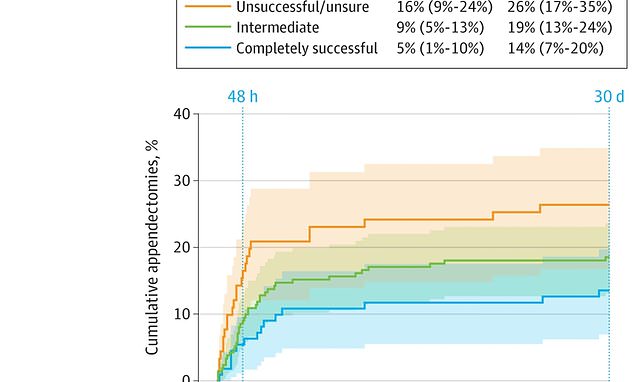 Drugs work better if you expect them to, a study suggests.

Patients with appendicitis who believed antibiotics would help were ‘substantially’ more likely to see symptoms improve.

Researchers at the University of Washington said it revealed the powers of the mind and the placebo effect.

This is the idea that your brain can convince your body that a treatment is making you feel better.

The state of mind cannot lower your cholesterol or shrink a tumor, as far as scientists know, but it can improve symptoms modulated by the brain, like pain. 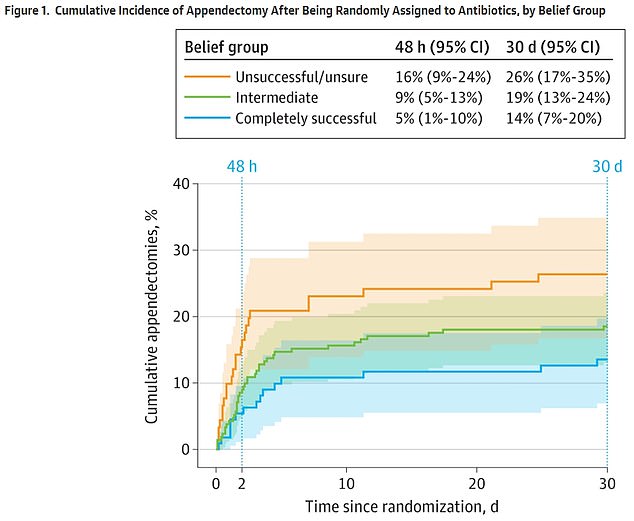 For the latest study, researchers looked at 425 participants who were mostly in their thirties between May 2016 and February 2020.

They were recruited from 25 medical centers across the US and were asked to fill out surveys before they were prescribed antibiotics.

The groups were then monitored for 30 days.

A placebo is anything that seems to be a ‘real’ medical treatment but is not, whether that be a sugar pill or saline injection.

What all placebos have in common is they do not contain an active substance that boosts a person’s health.

Placebos are used in studies to help scientists understand the effect of a new treatment on a given condition.

For example, in a study investigating a cholesterol-lowering drug, some would be given a placebo – often without knowing it – to compare the medication versus the sugar pill.

This allows them to check the treatment’s effectiveness and any side effects.

A placebo effect occurs when a person improves, or experiences side effects, after having nothing more than a sugar pill.

How placebos work is unclear but is thought to relate to the relationship between the body and the mind.

Some argue this is all in the mind but other studies show measureable physical changes after taking a placebo, such as a rise in hormones that ease depression.

Results showed that those who believed antibiotics would cure their illness were 13 per cent less likely to have surgery.

For comparison among those who had no faith in the drug, 24 out of 92 (27 per cent) had the surgery.

The paper also found believing in antibiotics made it 15 per cent more likely persistent symptoms — like stomach pain — would ease.

And they were six per cent more likely to be satisfied with their treatment.

Dr David Flum, a surgeon at the University of Washington who led the paper, argued this may be because antibiotic believers were more likely to stick to pop pills at the right times.

He also suggested that the belief in the drug could make it less likely that they experience pain and report it to doctors.

In turn, this affects a clinicians decision whether an operation is needed.

‘The experience and reporting of pain have been previously shown to be associated with patients’ beliefs and expectations,’ he wrote in the paper.

‘Participants reports of worsening pain may very well have motivated the decision for surgery.’

Their paper — published in JAMA Surgery — was based on the landmark Comparing Outcomes of antibiotic Drugs and Appendectomy (CODA) trial.

Carried out between May 2016 and February 2020, the trial led to antibiotics being accepted as a first-line treatment for appendicitis.

The appendix is a small tube-like organ with no known function that is attached to the large intestine.

It is thought to be an evolutionary leftover from when humanity’s ancestors survived on far more plant materials, like bark, and could help break them down.

Nowadays it is most commonly linked to appendicitis, a serious condition where the organ becomes inflamed due to an infection.

It triggers symptoms including a constant and persistent pain in the middle of the abdomen, making coughing or walking difficult as it may make the pain worse.

Normally patients would be offered surgery to remove the infected organ quickly, with recovery taking a few weeks. But more and more patients are now being prescribed antibiotics to fight the infection.

About 250,000 Americans are diagnosed with appendicitis every year, statistics suggest. It is most common among those 20 to 30 years old.