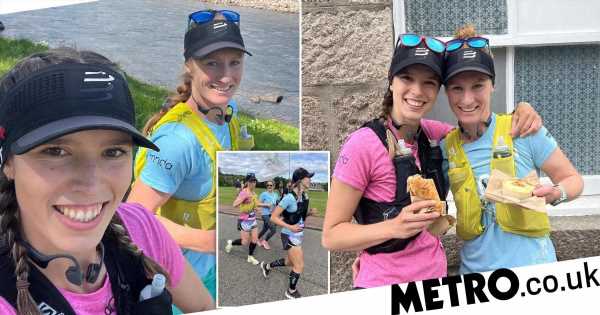 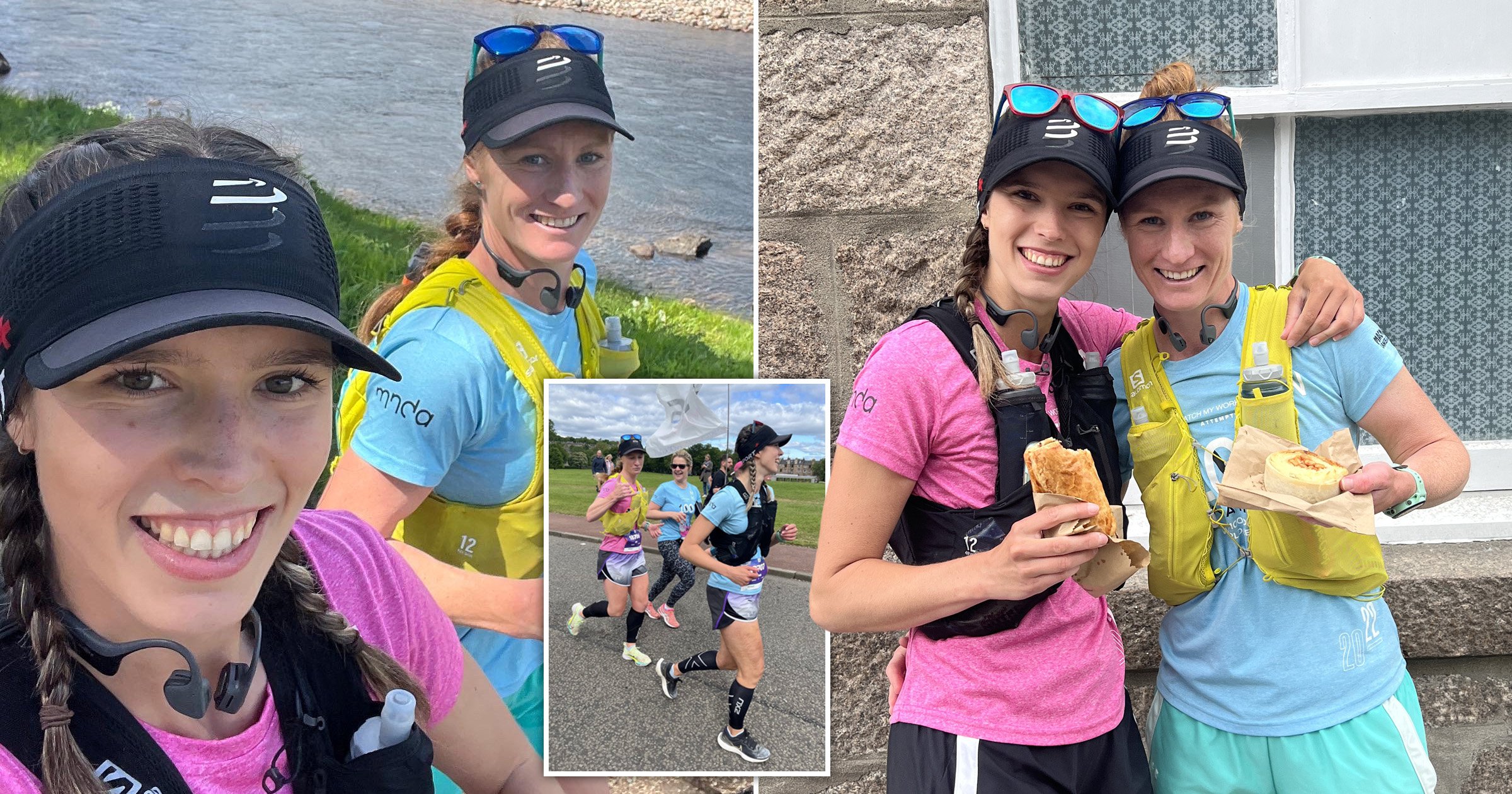 For most people, running one marathon in a lifetime would be a huge achievement.

But Fay Cunningham and Emma Petrie are not most people.

The couple believe that they have smashed the world record for running consecutive marathons – after covering a staggering 106 in as many days.

106 days and 2,777 miles later, they finished their final marathon on June 4 – which could be a new female world record.

Their attempt is yet to be confirmed by Guinness World Records, although it appears to have surpassed the previous total of 95, set in 2020.

The personal trainers, from Aboyne, Aberdeenshire, decided to take on the challenge to raise money after both losing parents.

Fay’s dad Alan died after suffering from motor neuron disease in February aged 61, while Emma’s mum Jan died from from cancer in 2019, aged 58.

‘I’m elated and so proud,’ says Fay. ‘Mostly I’m just so relieved that we’ve achieved it. It was a bold goal, I don’t think it’s sunk in yet that we’ve finished.

‘We’re extremely proud of each other and so happy to have done it, but happy too not to be running every day now.

‘But it was great fun, and the support we received from others is overwhelming. All the vitamin D was so good for us – we are so strong and healthy now.’

The women burned through seven pairs of shoes each as they pounded the tarmac and trails around their hometown, running a full 26.2 miles every day.

Averaging five hours a marathon, the couple clocked up a total of 530 hours running over the 106 days.

Their total distance – of 2,777 miles – is the equivalent to running from their home in Aboyne to London more than five times.

‘We wanted to do a big challenge to push our limits and inspire others to push there’s,’ adds Emma.

‘You need to have a big reason to do something like this, to keep you going. I’m young to have lost a parent, and neither of them were very old, so we thought, “do it while you can”.

‘They were both active and had that taken away from them, we wanted to honour that for them.

‘We both feel very lucky and grateful that we have the opportunity to do it.. It also helped us to process our grief – running is such a good form of meditation.

‘This gave us both time to reflect, think about, and process everything that has happened.’

Emma’s highlight was the Edinburgh Marathon, which the duo completed on day 100 – May 29.

Fay says she enjoyed day 50, when they started with a park run and many participants carried on to run the full marathon with them – some achieving their first marathon that day.

The pair had planned to set a new Guinness World Record of 100 marathons in 100 days, but had to up the ante in April when two unofficial records were set.

Then, just weeks later South-African Jacky Hunt-Broersma, who lost a leg to cancer in 2004, reached 104 marathons in as many days..

Emma and Fay are currently submitting the paperwork to make their 106 consecutive marathons the new official record.

The mark is, at the moment, held by American Alyssa Clark with 95, which she achieved in 2020.

‘It’s great to see so many women doing this,’ says Emma.

‘We just thought we’d better do an extra six marathons to get the record, but the 101 and 104 partly used running machines so we think it’s okay.’

Fay and Emma have run marathons and iron-man competitions before, and they both run, swim, cycle and strength train often.

The women got up at 7:30am on every morning of the challenge, ate a breakfast of cereal and spent two hours stretching and taking hot baths.

They would then eat five pancakes each, with yoghurt and fruit, before heading out for their daily marathon around 10am.

For recovery, they would submerge in an ice bath for two minutes when they got home around 3:30pm, to ward off pain the next day.

After that, they would eat their first evening meal, usually eggs or avocado on toast, before running online personal training sessions.

Each had a chiropractic session before their second dinner – which was often pasta – and would go to bed around 10pm.

The couple began training for the challenge in October, lengthening their usual four runs a week and slowing the pace, while also teaching their bodies to consume food as they ran.

Luckily they gained some extra pounds before setting off, because despite each consuming over 4,000 calories a day, they lost around 11 pounds each over the duration.

At their final finish line, the couple celebrated with Prosecco and pizza before dancing the night away at a ceilidh.

‘We weren’t sure we’d be able to dance but somehow we managed, we just sprayed each other with Prosecco and had a huge hug,’ says Fay.

‘We’re tired all over. It was even hard to cook because we didn’t want to stand up.

‘I think the stuff outside the running like acupressure mats and the cold baths is the most painful, but you’re spurred on to do it by the fear of the pain the next day.’

Fay says the first two weeks of the challenge were the hardest.

‘My thigh muscles went into crazy spasms and Em got a sickness bug, but chiropractic and cola got us through – after that we adapted and hit our rhythm,’ says Fay.

‘It was good that we had each other to help get through it, and neither of us wanted to stop, we just knew we had to get to the end of each day.’

The couple have raised over £32,000 for charities the Motor Neurone Disease Association and Macmillan Cancer Support.