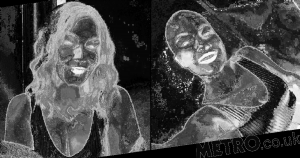 A young woman who lost all her hair at 17 has abandoned her wig after bravely celebrating her baldness in a post on Instagram.

Jess Newman, 25, has now applied to be a model – thanks to the positive reactions she got when she posted her pictures on social media.

When Jess, who lives in Colchester, Essex, first started losing her eyebrows, aged 15, doctors put it down to puberty.

But at 16, after she met up with her father for the first time in six years, her hair fell out in clumps.

Speaking out to mark September’s Alopecia Awareness Month, Jess says: ‘At first, losing my eyebrows when I was 15 was gradual, until I was left with just half of one.

‘The doctor thought it was probably associated with puberty.

‘But, after the stress of meeting my father for the first time since I was 10 – who I have not seen again since – the hair on my head started falling out, too.

‘I was left with bald patches around the bottom of my hairline and crown and it all started to recede.’

At 17, Jess was referred to a dermatologist, who diagnosed her with alopecia areata, an autoimmune condition, where cells from the immune system attack hair follicles, stopping them from producing more hair.

‘The dermatologist told me it’s related to how the body deals with stress,’ she adds.

‘It was really upsetting, because there is no cure and you can’t do anything to stop it. The more you stress the worse it gets.

‘The doctors said I should look at the wig process, saying it would be better to shave my head, rather than deal with the stress of my hair continuing to fall out.

‘I was scared, as I didn’t know anybody else with alopecia and thought nobody else really understood how I felt.

‘Back then, there was not a big community online and not much support.’

Eventually, Jess agreed to have her head shaved by her hairdresser, but she found it impossible to even look in the mirror when it was done.

‘I wore beanie hats,’ she explains. ‘Even if I wore a wig, I would wear a beanie hat over it, because I thought everybody was looking at me and could tell I had one on.

‘I was in my first year of college and started to avoid attending some lessons, or I’d go to one but go straight home afterwards, as I felt so self-conscious. I didn’t socialise, either, in case people found out about my wig.

‘I had a close friendship group, who knew I wore one, but nobody else did.

‘I worked part time as a waitress and would cry before every shift, because I was worried people would notice.

“I wore synthetic wigs, which were not very comfortable, for six months to a year.

‘When I switched to real hair wigs, aged 18, it made a difference once my head had got used to them, after a couple of weeks.

‘And if I stayed with a friend, I’d sleep in the wig, refusing to take it off.’

Living with such anxiety took its toll on Jess, but her supportive family kept her going.

‘My mum is my best friend and has been amazing. She’s my biggest fan and always picked me up if I cried on the way to college,’ she says.

‘My stepdad Richard was also brilliant if I was down at home. He always says, “bald is beautiful”.’

At 18, Jess had her eyebrows tattooed on, which was a huge confidence boost.

‘Before that, I would use semi-permanent tattoos that you get for children, but I couldn’t go swimming or anything, in case they came off,’ she says.

‘I struggled most with losing my eyelashes though, which happened when I was 19, I could tattoo on eyebrows and wear a wig to cover my head, but I had to accept my bald eyelashes, because I didn’t feel confident with false ones.’

It was not until she was 20 that Jess, who is single, took the first tentative steps to go public about her hair loss, by revealing her bald head to her friends.

‘The first time I took my wig off, one friend started crying. She hadn’t realised I was completely bald.

‘Everyone was really nice about it, but it was what I thought of myself that was the problem.

‘I thought I was ugly and looked like an alien. I thought I looked really strange.

‘As a young woman, make up and doing your hair are big parts of your identity, so not having any made me feel a bit lost.

‘And I hated being complimented on my hair, as I knew it was a wig.

‘I only took it off when I was on holiday, because I didn’t know anybody there and didn’t mind so much what strangers thought.

‘It was what people at home thought that really mattered to me.’

It was the spring lockdown, because of the pandemic, that ultimately gave Jess the confidence to come out to the world by posting a wigless picture of herself on Instagram in March.

‘I felt braver, because I wasn’t going out and having to see people,’ she explains.

‘I was nervous before pressing upload, but I had some lovely comments and people were very supportive. I haven’t had any negative comments. It felt so empowering.

‘I spoke to a lot of other girls with alopecia and we now have a WhatsApp group.’

Her positive reception online then inspired her to go out locally without her wig.

‘If I do go out bald, I prefer to be with my friends or with my mum for support, in case someone says something mean,’ she says.

‘I’ve had a couple of boys shout “wiggy” at me. Children are quite bad for it, as they don’t understand. I heard one little boy ask his mum why that boy was wearing a swimming costume rather than trunks, but, thankfully, I’ve never been bullied for being bald.

‘I’ve had people have asked me how my chemotherapy is going. I went to Orlando, Florida, USA for my birthday, people in the queue would ask me how my chemo was going. People sometimes assume I’m ill.

‘But there are worse things that could happen and meeting other people online with alopecia has been very comforting.’

In August, Jess was asked by Alopecia UK to become one of their 15th birthday champions after they saw her on Instagram.

Jess made a pledge to go out 15 times without her wig and post the results on social media – raising almost £1,000 for the charity, so far.

‘Where I live, everybody knows each other, so I did worry about doing it,’ she says.

‘There were times when I’d fret before going out, but I still did it. I’ve even been to the pub without my wig.

‘When I was challenged to go to a high street, I did feel my heart drop when I saw someone I knew, who hadn’t seen me without a wig before. But he came over and gave me a big hug and acted normal, which put me at ease.’

Jess has now applied to be a model, as part of a campaign with Models of Diversity who are looking to recruit an inspirational person for a project with fashion brand Missguided.

‘If it wasn’t for the support I had on social media, I would never have had the courage to do that,’ she adds.

‘I’m on a journey and I don’t know if I’ll ever ditch my wig for good, but I feel proud of myself for finally believing that bald really can be beautiful.’

Do you have a story to share? We want to hear from you.

Get in touch: [email protected]