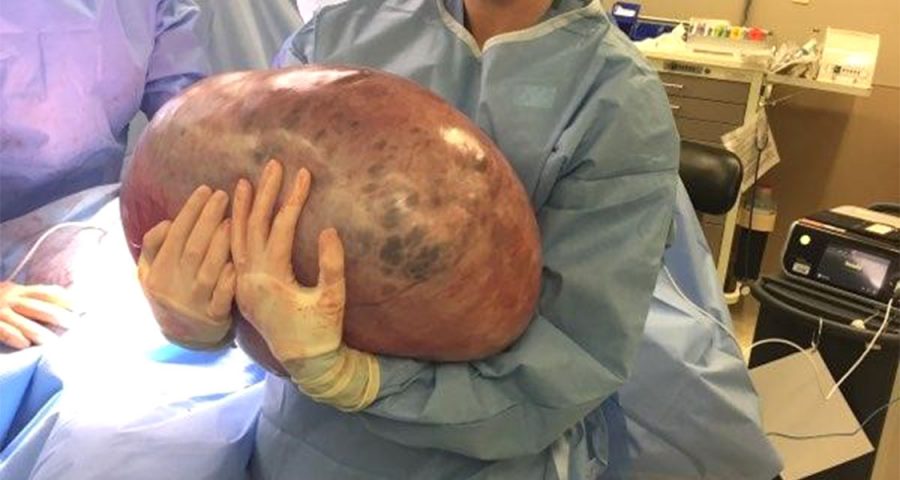 An Alabama woman who thought she had unintentionally put on weight discovered that the added mass was actually a 50-lb. ovarian cyst.

Kayla Rahn had spent months dealing with stomach pain and breathing problems, but thought the issues were because she had put on weight.

“I couldn’t even walk to my car without losing my breath,” the Alabama-based Rahn, 30, told WSFA 12.

Doctors also assumed that she had just gained weight, and said her problems would be fixed if she worked on losing it — something Rahn was already doing.

“I had been trying to lose weight for about a year, but I was gaining weight,” she said. “I legit looked like I was a solid 9 months pregnant. We went to dinner and someone asked me if I was having twins. It was frustrating and rough.”

The pain soon became too much to ignore, and in May, at her mother’s urging, Rahn went to the ER, where a scan showed that she had a massive cyst in one of her ovaries.

Rahn said it was a relief to hear that something was wrong, and that she hadn’t just gained weight.

“I do remember telling my mom and busting out crying they were going to fix it. I knew something was wrong,” she said in a press release shared with PEOPLE.

Doctors rushed Rahn into surgery at Jackson Hospital, and successfully removed the cyst. Dr. Gregory Jones, an OB-GYN present for the surgery, was shocked by the size of the cyst.

“This is one of the largest I have ever seen or certainly removed,” Jones said in the press release. “We are very excited things went well for her.”

The cyst was thankfully benign, and Jones said the technical name for it is mucinous cystadenoma.

“As soon as I got home and was able to move a little, I tried every shirt I had on and it was awesome,” said Rahn. “This dress I have on, I actually have not been able to wear in a year.”