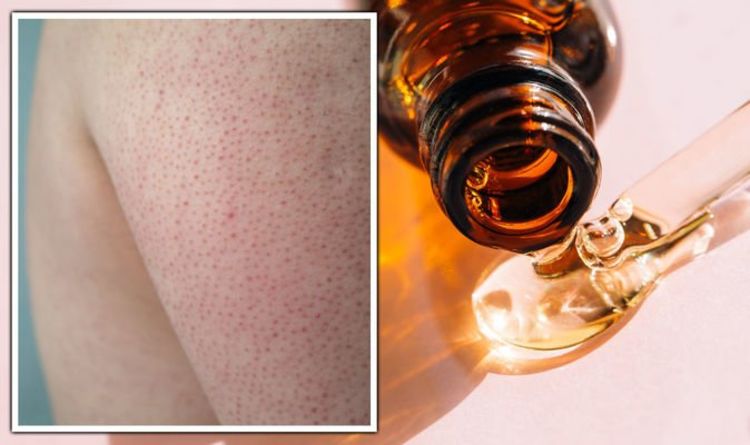 This Morning: Dr Chris on effectiveness of vitamin C for the flu

While the deficiency is relatively rare in developed countries, it still affects more than one in 20 people. Humans cannot make the compound in large amounts, and so must regularly consume it in order to prevent a lack of it. This is ideally done through fresh fruits and vegetables, although can also be achieved through supplements.

There are a number of signs and symptoms of deficiency.

Most of these are related to impairments in collagen production or not consuming enough antioxidants.

Some of the earliest signs of deficiency include fatigue, red gums, easy bruising and bleeding, joint pain and rough, bumpy skin.

According to an educational video created by the health channel Bestie, titled ‘Vitamin C Deficiency Symptoms That Should Never Be Ignored’, rough skin is, in fact, one of the most common yet overlooked symptoms.

Because vitamin C is responsible for collagen production, bumpy and damaged skin will more often than not be the first sign of a deficiency.

If there is a lack of vitamin C in your body for more than three months, a condition called keratosis pilaris can occur.

It causes the keratin protein to accumulate inside the pores of your skin.

What materialises has been described as bumpy “chicken skin” which forms on the back of the upper arms, thighs or buttocks.

JUST IN: Pfizer booster shot: The ‘unexpected’ side effect after third dose

There are other causes of keratosis pilaris, so its presence alone is not enough to diagnose a deficiency.

Peculiarly, it can cause hair to grow in bent or coiled shapes due to defects that develop in the protein structure of hair as it forms.

It is one of the hallmark signs of low levels of the compound.

These damaged hairs are more likely to break off or fall out.

The hair abnormalities often resolve within one month of treatment with adequate amounts of vitamin C.

When the body is deficient in vitamin C, small blood vessels on the surface of the skin become fragile and break easily.

This causes small, bright red spots to appear around the follicles.

The complication is known as perifollicular hemorrhage, with dosing on vitamin C supplements typically resolving it within two weeks.

Another odd symptom that characterises a vitamin C deficiency is spoon-shaped nails.

While they are more closely associated with iron deficiency, concave, thin and brittle fingernails can be signs that your body is lacking in the vitamin.

Luckily, these can be easily reversed once sufficient amounts of vitamin C have been consumed.

If you think you are suffering from a vitamin C deficiency you should contact your local GP.