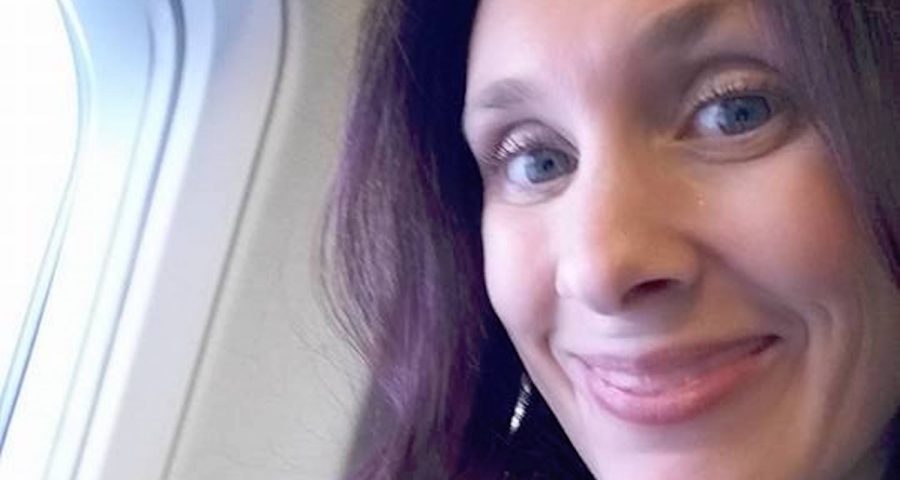 When Californian Kari Cummins noticed an abnormal spot on her chin, the mum-of-five didn’t overthink it.

“I assumed it was a blackhead or a weird type of adult acne, as I hadn’t seen anything like that before,” she told the Daily Mail.

But it wasn’t just a blemish. After the 35-year-old saw a dermatologist at her mother’s insistence and numerous tests revealed she had squamous cell carcinoma, a form of skin cancer.

“If I hadn’t of had it removed when I did then the chances are it would have grown larger and deeper into the tissue and could have spread,” she told the publication.

It took 35 stitches to close up the 10 cent piece-size hole in her chin, leaving her with a significant scar.

Because that hole in my face is waaaay cute, right?!? Wrong! I know…gross looking… This was 2 years ago. This is what it looks like to get skin cancer removed. What looked like a tiny thing on the surface was actually much bigger underneath. I am 34 years old and I have already had 5 skin cancer surgeries! It's #skincancerawarenessmonth and with summer just weeks away I wanted to highlight essential oils and other natural products that are A-MAZING for all things skin but don't contain harmful chemicals(because, harmful chemicals can cause skin cancer, too, not just the sun)! So stay tuned and tag a friend who might want to learn more about natural skin products and preventing skin cancer!

“At first I felt very self-conscious, but now I find it empowering as I can use my experiences to share my story in the hope of urging others that it is so important to look after your skin.”

Kari says she always had fair skin but spent a lot of time outdoors as a kid and used tanning beds in her 20s and early 30s.

“I wasn’t a frequent user, and only used them occasionally, but I’ve learnt that it doesn’t take much for the UV rays to accelerate the growth of the carcinoma, especially if you have fair skin.”

I didn't post much today because I spent the entire day unplugged and with my 5 kids. It was the last day of school for my older girls! Whooohooo! We spent a couple hours at the lake with my 2nd grader and her whole 2nd grade class, then I took the older girls shopping for reaching their goals in school this year! I'm COMPLETELY wiped out, but it was a great day with all of them! . . . . . . . . #uniteinmotherhood #umh_kids #childofig #childrenofinstagram #igkids #fun #letthembelittle #myeveryday #theeverydayproject #momswithcameras #momlife #momof5 #lakelife #lakeliving #lovelivingatthelake #sunshine #freshair #mountainlife #mountainkids #outdoorkids #shopping #shoppingwithkids #childhoodunplugged #childrenunplugged #unplugged

Solarium beds are now banned in Australia, but our country still has one of the highest rates of skin cancer in the world. Around two out of three Australians will be diagnosed with skin cancer by the time they are 70, with more than 750,000 people treated for one or more non-melanoma skin cancers each year.

So let this be a reminder to check your skin regularly and speak to a medical professional if you notice new or changing spots.