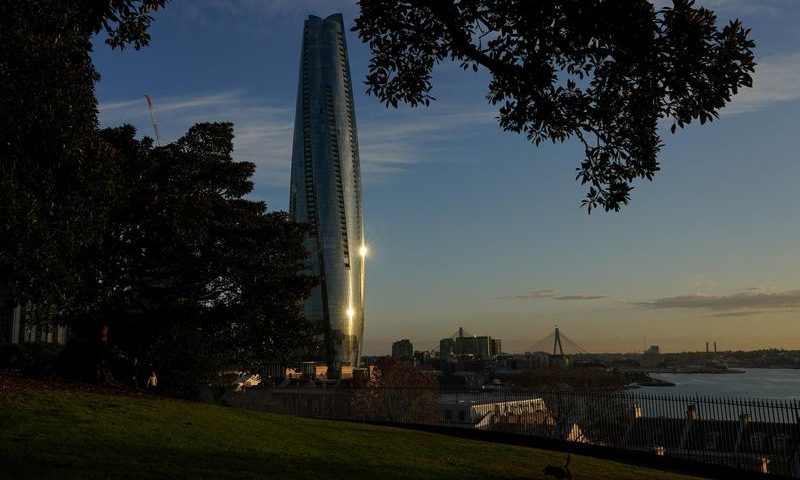 SYDNEY (Reuters) -Australian authorities reported a slight easing in new COVID-19 cases in Sydney on Tuesday, but left open the possibility of extending a lockdown in the country’s largest city to douse an outbreak of the highly infectious Delta variant.

A dog chases a ball at a popular city lookout spot in front of the Crown Sydney skyscraper during a lockdown to curb the spread of a coronavirus disease (COVID-19) outbreak in Sydney, Australia, July 12, 2021. REUTERS/Loren Elliott

New South Wales state Premier Gladys Berejiklian warned the harbour city’s more than 5 million residents not to become complacent as she reported 89 new locally transmitted cases, down from Monday’s record high for the year of 112 cases.

“One day is not a trend, the numbers will keep bouncing around,” Berejiklian said in a televised conference, urging people to stay home except for urgent reasons.

Authorities also reported the death of a man in his 70s, the second COVID-19 death in the country this year after a woman in her 90s died in recent days.

Most concerning to health officials was the fact that many people were moving around in the community while infectious, a trend that is likely to see Sydney’s lockdown extend beyond the scheduled end date of Friday.

Chief Health Officer Kerry Chant said at least 21 of the cases reported on Tuesday were people who were out in the community while infectious. That number was likely to rise as officials determined the isolation status for another 14 cases, she said.

“This is still too many people in the community that are infectious,” Chant said.

Berejiklian has repeatedly said that underlying number needs to be close to zero to lift lockdown measures. On Tuesday, she said residents could expect an update on whether the lockdown would be extended by Thursday.

Outbreak hotspots across the city now number in the hundreds, including apartment blocks, homeware stores, health clinics, a bank and a butcher.

An apartment building in the beachfront suburb of Bondi was locked down under police guard after eight occupants tested positive.

“Police and security are ensuring that the provision of food and other services to residents, including daily welfare checks, is conducted safely throughout their 14-day quarantine period,” state police said in an email.

Amazon.com Inc temporarily closed its main Sydney distribution centre in the southwest of the city for deep cleaning and told some staff told to self-isolate after two workers tested positive.

There were growing fears on Tuesday that the Sydney outbreak had spread further afield.

Neighbouring Victoria state reported three new cases, all members of a family that had returned home to Melbourne from New South Wales. The cases were the first reported in Victoria in almost two weeks.

Residents of an apartment block in Melbourne, the Victoria capital, were ordered to self-isolate after a furniture mover who was in the building tested positive.

Both Victoria and South Australia are on alert for the potential of more cases after two people from Sydney travelled through the state for work while unknowingly infectious.

Snap lockdowns, speedy contact tracing and tough social distancing rules have helped Australia contain past outbreaks and keep COVID-19 numbers lower than many other developed countries with just over 31,300 cases and 912 deaths.

However, the recent outbreak is growing rapidly. Infections neared 800, less than a month since the first was detected in a limousine driver who transported overseas airline crew.