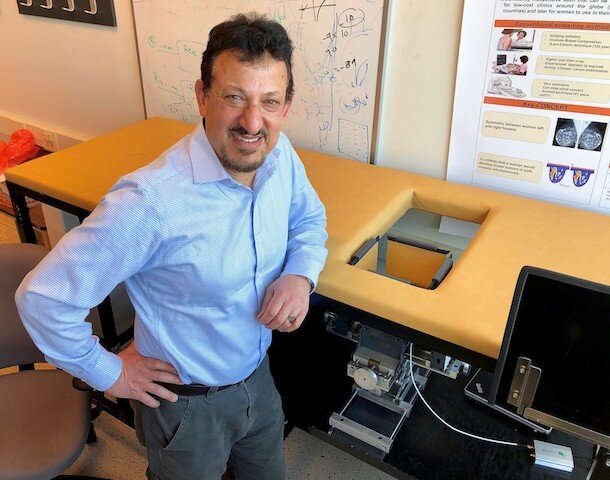 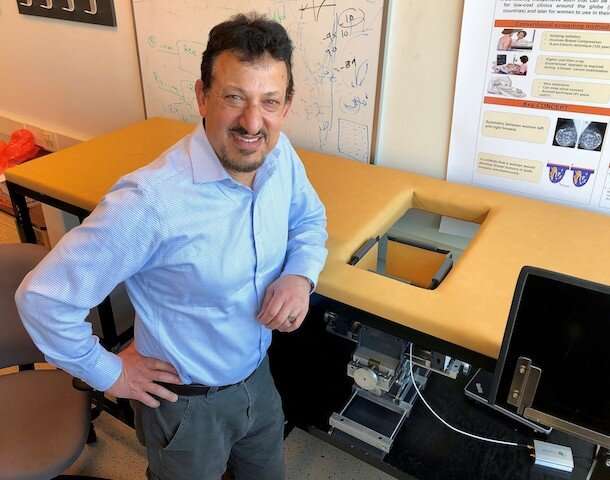 Researchers have developed a new, inexpensive technology that could save lives and money by routinely screening women for breast cancer without exposure to radiation.

The system, developed by researchers at the University of Waterloo, uses harmless microwaves and artificial intelligence (AI) software to detect even small, early-stage tumors within minutes.

“Our top priorities were to make this detection-based modality fast and inexpensive,” said Omar Ramahi, a professor of electrical and computer engineering at Waterloo. “We have incredibly encouraging results and we believe that is because of its simplicity.”

A prototype device—the culmination of 15 years of work on the use of microwaves for tumor detection, not imaging—cost less than $5,000 to build.

It consists of a small sensor in an adjustable box about 15 centimeters square that is situated under an opening in a padded examination table.

Patients lie face-down on the table so that one breast at a time is positioned in the box. The sensor emits microwaves that bounce back and are then processed by AI software on a laptop computer.

By comparing the tissue composition of one breast with the other, the system is sensitive enough to detect anomalies less than one centimeter in diameter.

“If women were screened regularly with this, potential problems would be caught much sooner—in the early stages of cancer,” he said. “Our system can complement existing technology, reserving much more expensive options for when they’re really needed.

“We need a mixture, a combination of technologies. When our device sent up a red flag, it would mean more investigation was warranted.”

It would also save health-care systems enormous amounts of money and, because of its low cost and ease of use, dramatically increase access to screening in the developing world.

Researchers have applied for a patent and started a company, Wave Intelligence Inc. of Waterloo, to commercialize the system and hope to begin trials on patients within six months. Three rounds of preliminary testing included the use of artificial human torsos known as phantoms.