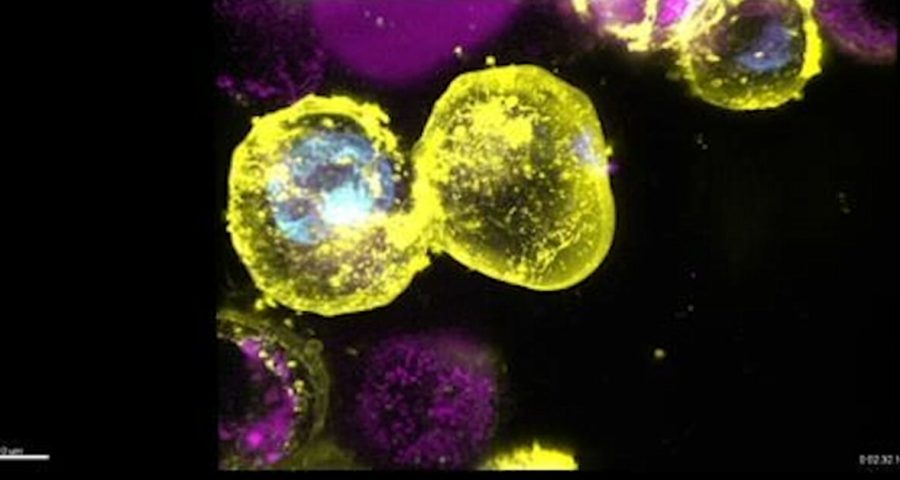 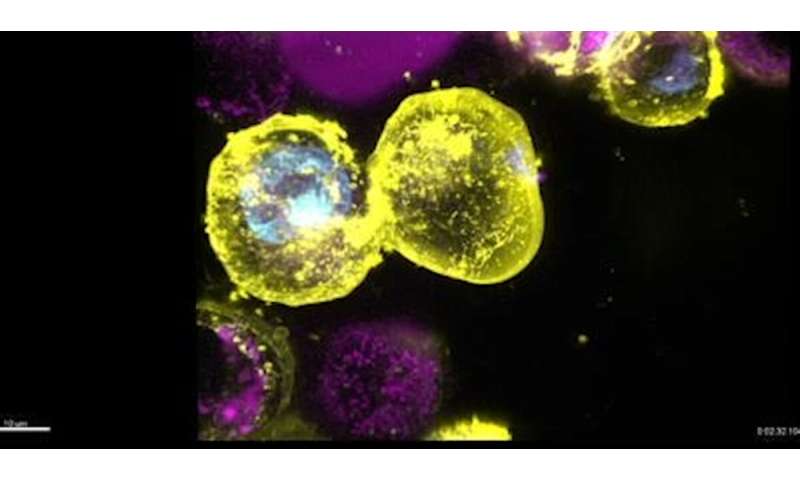 Walter and Eliza Hall Institute researchers have made significant advances in understanding the inflammatory cell death regulatory protein MLKL and its role in disease.

In a trio of studies published today in the journal Nature Communications, the team used advanced imaging to visualize key steps in the activation of MLKL, revealing previously unseen details about how this protein drives an inflammatory form of cell death called necroptosis. They also showed for the first time that inherited variants of MLKL are connected to a human inflammatory disease. By examining sequence variations in human MLKL and comparing the structure of different animals’ MLKL proteins, the team also provided evidence for MLKL having been subject to evolutionary pressures, potentially through its role in protecting against infections.

Cell death is a way that the body protects itself from diseases, by removing unwanted or dangerous cells. In some situations—such as viral or bacterial infections—dying cells trigger inflammation to protect neighboring cells from the infection. This form of cell death is called ‘necroptosis’, and is tightly controlled by specific proteins within cells.

Associate Professor James Murphy said the protein MLKL was an important regulator of necroptosis. “While MLKL and necroptosis protect our bodies from infections, excessive necroptosis has been linked with inflammatory conditions such as inflammatory bowel diseases,” he said. “Our research team has taken several complementary approaches to better understand how MLKL functions—which could improve the understanding and treatment of diseases involving excessive necroptosis.”

One study, led by Dr. Andre Samson, used advanced imaging technologies to watch the MLKL protein in cells as they underwent necroptosis. Dr. Samson said this identified two important ‘checkpoints’ in necroptosis. “We could see how MLKL changed its location as necroptosis occurred, clumping and migrating to different parts of the cell as the cell progressed towards death,” he said.

“Intriguingly, we could see activated MLKL gather at the junctions between neighboring cells—potentially suggesting a way for one dying cell to trigger necroptosis in surrounding cells, which could be a form of protection against infections.”

Role of MLKL in inflammatory diseases

Dr. Joanne Hildebrand and Dr. Maria Kauppi examined links between alterations in the MLKL protein and inflammatory conditions. Dr. Hildebrand said Institute researchers isolated a variant of MLKL that caused a lethal inflammatory condition in laboratory models. “We discovered this form of MLKL contained a single mutation in a particular region of the protein that made MLKL hyperactive, triggering necroptosis and inflammation,” she said.

“By searching genome databases, we discovered similar variants in the human MLKL gene are surprisingly common—around ten per cent of human genomes from around the world carry altered forms of the MLKL gene that result in a more-easily activated, more inflammatory version of the protein.

Dr. Hildebrand said the high frequency of MLKL variants in humans around the world suggested that the more inflammatory variants of the protein might have offered an evolutionary benefit at some point of human history. “Perhaps having a more inflammatory form of MLKL meant some people could survive infectious diseases better than those people who only had the less-easily activated form of the protein,” she said.

Dr. Davies said usually when one protein is found in different vertebrate species, the proteins in the different species have a similar structure that has been conserved during evolution. “To our surprise, the structures of MLKL were quite different between different vertebrate species—even between closely related species such as rats and mice. In fact, rat MLKL is so different from mouse MLKL that the rat protein cannot function in mouse cells—which is surprising as many proteins are interchangeable between these two species,” Dr. Davies said.

“We think that evolutionary pressures such as infections may have driven substantial changes in MLKL as vertebrates evolved. Animals with variant forms of MLKL may have been able to survive some pressures better than other animals, driving changes in MLKL to accumulate, much faster than for many other proteins.

“Together with the data for human variations in MLKL, this suggests MLKL is critical for cells to balance beneficial inflammation, which protects against infections, with harmful inflammation that causes inflammatory diseases,” Dr. Davies said.

Associate Professor James Murphy said the team’s research started through studying the inflammatory variant of MLKL more than 13 years ago—at a time when MLKL’s role in necroptosis was not known.