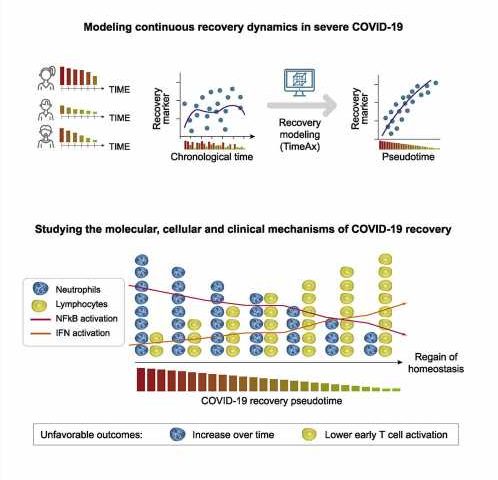 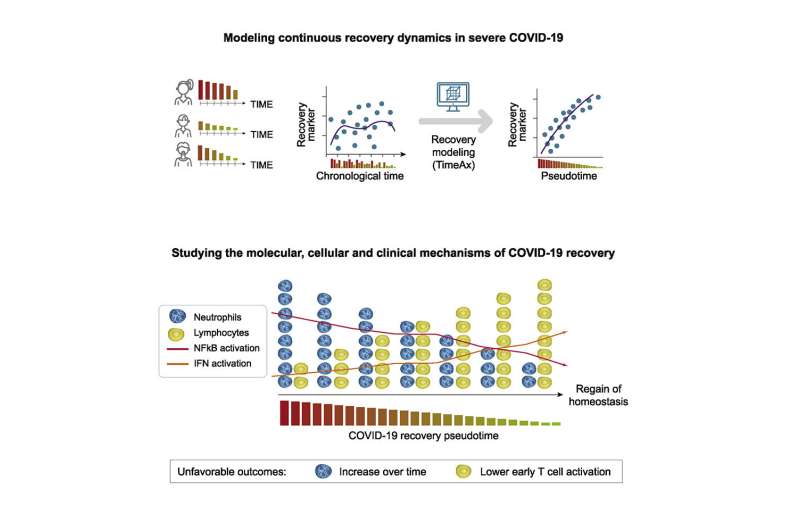 Recovery from severe COVID-19 is characterized by a reduction of certain white blood cells and changes in the molecular regulation of the immune system. This is the conclusion of an international research team coordinated by DZNE, which reports on this in the journal Cell Reports Medicine. The scientists examined the blood of 139 patients who had received intensive care. Using a novel method of data analysis, they identified—despite individual differences in the time course of the disease—mechanisms of shared relevance that characterized the recovery process from an immunological perspective. These findings demonstrate a novel approach for assessing disease status, which could contribute to more targeted and thus more effective treatment.

The current study is the result of an international effort in which DZNE collaborated with Helmholtz Zentrum München, Technion Institute in Israel and Radbourg University in the Netherlands. The challenge faced by the researchers was to identify commonalities in the data from different patients. This is because in COVID-19, as in many other diseases, the recovery process can vary greatly from person to person, as evidenced, for example, by how symptoms develop over time and how long hospitalization lasts.

“This makes it difficult to identify generalizable cellular and molecular mechanisms underlying the disease. However, such insights are relevant for understanding the nature of the disease and the body’s response—and thus for deciding on the optimal treatment,” says bioinformatician and genome researcher Dr. Amit Frishberg, first author of the current publication. “Therefore, to analyze the data, we used a novel method that we recently developed. Our computational approach is designed to discover common patterns in the variety of findings from different patients that may not be obvious.”

COVID-19 can affect multiple organs. However, the disease is known to be significantly shaped by the immune response. “This response is reflected in the blood because that is where the white blood cells circulate,” Frishberg says. “These cells are essential components of the immune system. Therefore, our study focused on the blood of patients.”

In total, the researchers studied blood samples from 139 adults, their ages ranged from 21 to 86 years, and most were male. The data came from three different cohorts. All patients had received treatment in an intensive care unit (ICU) including ventilation: 105 recovered to the point that were eventually discharged from the ICU, while 34 died. From most of the individuals studied here, there were multiple blood samples, usually collected during a period of approximately three weeks after admission to the ICU. Also, self-reported health status three months after ICU admission (and subsequent discharge) was available for some patients.

The analysis revealed that the recovery process is associated with a gradual reduction in the number of so-called neutrophils. They are the most common white blood cells and within the arsenal of the immune system, they act as one of the first defense lines against pathogens. “We found that patients with severe COVID-19 have a high number of mature, that is, fully developed neutrophils in their blood, whose counts decrease during the recovery process. The readings of other white blood cells also change as they return to normal levels, with some of them falling while others rise. However, these changes are less pronounced than in neutrophils,” Frishberg says.

“Also, we see that in ICU patients, an increase in mature neutrophils over a prolonged period of time is very likely to result in a fatal outcome. This is possibly because the steady increase is associated with an overshooting and therefore harmful immune response.The number of these cells in the blood could therefore serve as a biomarker and be more significant for predictions of disease development than other biomarkers currently being discussed.”

The researchers detected further changes in the course of recovery that affect molecular signaling pathways and regulatory mechanisms of the immune system. “What is remarkable about our findings is that recovery followed the same biological pattern in all patients, despite individual differences in the time course of the disease. There is, so to speak, a common thread. In our data, we have found no evidence that the recovery process after severe COVID-19 may follow different trajectories,” Frishberg says.

For their analysis, the scientists relied primarily on blood transcriptomes. These data sets reflect gene activity of all blood cells at a given time. Typically, more than 10,000 different genes are registered. “Blood transcriptomes provide a very detailed picture of what’s happing immunologically,” says Prof. Joachim Schultze, Director of Systems Medicine at DZNE and a professor at the University of Bonn, who was also involved in the current study. “The analysis of this very complex data requires computational techniques. This is where our new approach came in.”

The method applied by the researchers relies on a computational algorithm that arranges all transcriptomes from different patients in a shared sequence. “This is based on similarities and on the assumption that all recovered patients ultimately follow the same recovery trajectory. The idea is that each transcriptome is a snapshot of the disease state that evolves into to the next snapshot. Similar to how many individual frames ultimately make up a movie,” Schultze says.

From this ranking of individual, experimentally acquired transcriptomes, a model is computed that reflects the continuous course of the recovery process. In this, the biological dynamics over time are characterized by a parameter calculated by the algorithm. “Since the recovery process can vary individually, the same immunological situation may occur at different times in different patients, for example, with respect to symptoms onset. Chronological time is therefore not an appropriate measure to capture the development of the recovery process on a biological scale,” Schultze explains. “Thus, our approach is based on computing a parameter, which is called pseudotime and which is assigned to each patient sample. In this, low pseudotime represents a severe disease state or an initial state of recovery, while high pseudotime indicates an advanced state of recovery.”

An approach for better treatment

From this model, the researchers were able to derive their findings on the decrease in neutrophils and changes in regulatory mechanisms, all of which were not evident from the raw data. In addition, having access to data from different cohorts allowed them to validate their findings and check whether the assumptions their model was based on, were in fact consistent with the experimental findings.

“Our study shows how to extract insights from complex data by using algorithms and modeling. We believe that it is a powerful approach with a potential for broad applications. Many diseases are characterized by heterogeneous and patient-specific recovery trajectories. In light of this, our analysis method may also be useful for research on diseases other than COVID-19,” Schultze notes.