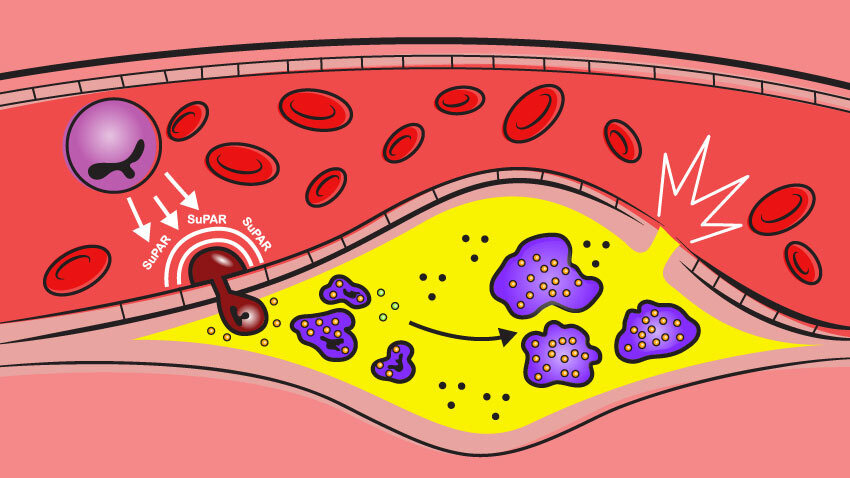 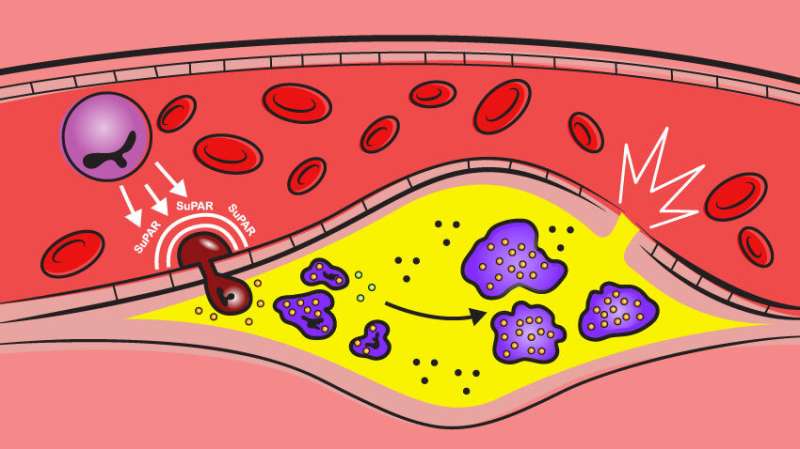 For the longest time, clinicians have treated cardiovascular disease by focusing on diabetes and blood pressure control, reducing cholesterol using medications like aspirin and statins.

Despite these measures, heart disease remains the number one cause of death in the United States, with many patients having heart attacks even after their risk factors are controlled, says Salim Hayek, M.D., physician-scientist and medical director of the University of Michigan Health Frankel Cardiovascular Clinics.

But a study led by Michigan Medicine has uncovered a protein produced by the immune system that causes atherosclerosis—the hardening of arteries that affects over a billion people worldwide—which offers the promise of new treatments.

“Targeting the immune component central to the development of atherosclerosis is the Holy Grail for the treatment of heart disease,” said Hayek, senior author of the study “This is the first time that a component of the immune system is identified that meets all the requirements for being a promising treatment target for atherosclerosis.”

This protein, called soluble urokinase plasminogen activator receptor, or suPAR, is produced by the bone marrow. It acts as a regulator, essentially a thermostat for the activity of the immune system, or “immunostat.”

Past studies have shown suPAR to be a marker of cardiovascular disease. But this study, published in the Journal of Clinical Investigation, is the first evidence showing that the protein actually causes atherosclerosis when at high levels.

First, the research team analyzed the Multi-Ethnic Study of Atherosclerosis, which consists of more than 5,000 people without known cardiovascular disease and found that those who had higher suPAR levels were much more prone to develop atherosclerosis and experience cardiovascular events, regardless of their underlying risk factors.

Then, the investigators did a genetic study of 24,000 people to find whether certain genetic variations affected levels of suPAR in blood. They discovered a specific variant in the gene PLAUR that codes for suPAR, and people with that genetic variant tended to have higher suPAR levels. Most importantly, that genetic variant was linked to atherosclerosis in a Mendelian randomization analysis of 500,000 participants in the UK Biobank, which was replicated in two other large data sets.

“We also found that participants lacking a copy of the PLAUR gene have lower risk of heart disease,” said first author and geneticist George Hindy, M.D., Ph.D., of Regeneron Genetics Center. “Altogether, the genetic data is truly compelling for high suPAR being a cause of atherosclerosis.”

“Even prior to developing atherosclerosis, the mouse aortas with high suPAR levels contained more inflammatory white blood cells, and the immune cells circulating in blood were in an activated state, or ‘attack-mode,'” said Daniel Tyrrell, Ph.D., co-first author and research fellow at the U-M Health Frankel Cardiovascular Center.

“High suPAR levels appear to activate the immune cells and prime them to overreact to the high cholesterol environment, causing these cells to enter the blood vessel wall and accelerate the development of atherosclerosis.”

What is unique about this study, Hayek says, is that it brings to light high-quality clinical, genetic and experimental data—all pointing to suPAR as a cause of atherosclerotic disease.

“Now, we’re looking into developing treatments to reduce suPAR levels safely as a strategy to prevent and treat heart disease, especially since traditional therapies for atherosclerosis have no impact on suPAR,” he said.

“This paper places suPAR as the link between kidney and cardiovascular disease; a common factor causing both through this inappropriate, persistent activation of the immune system,” said co-author Jochen Reiser, M.D., Ph.D., chair of the Department of Medicine at Rush University and an expert in the study of suPAR.

“This is pointed out in the Mendelian randomization genetic analysis done by the investigators, showing that high suPAR is also linked to kidney disease.”

For both conditions, suPAR has long been known as a biomarker for poor outcomes and disease progression. In a 2020 study, Hayek’s team found that suPAR can worsen acute kidney injury and that blocking suPAR prevents it. A recent study led by Hayek found that levels of protein are high in patients with heart failure and predict death for patients.

Research into suPAR’s role in health and disease has advanced rapidly in the past 10 years. Hayek says suPAR has great potential to be a successful treatment target for cardiovascular and kidney disease. His lab has already begun work designing anti-suPAR therapies and planning clinical trials.

“My hope is that we are able to provide these treatments to our patients within the next three to five years,” he said. “This will be a game changer for the treatment of atherosclerotic and kidney disease.”