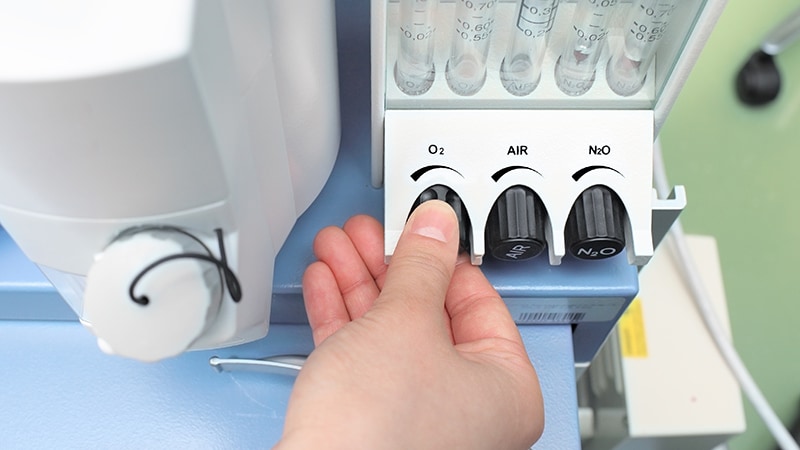 A group of anesthesiologists is pushing for changes in their profession to limit the pollution arising from inhaled gases. In a recent article in Anaesthesia, they highlight “practical, evidence-based actions that can be undertaken to reduce the impact of pollution” without compromising patient care. These include choosing gases that cause less environmental damage and switching to portable canisters of nitrous oxide to eliminate the need for piped systems that leak.

It has been estiamted that inhaled anesthetic agents are responsible for 0.01% to 0.10% of total global carbon dioxide equivalent (CO2e) emissions that contribute to global warming, Jessica Devlin-Hegedus, MD, of Australia’s Wollongong Hospital, and Jodi Sherman, MD, of Yale University, and their co-authors write. While these emissions play a seemingly small role in contributing to total global emissions, inhalational anesthetics account for 5% of acute hospital CO2e emissions and 50% of CO2e emissions from perioperative services.

In an interview with Medscape Medical News, Sherman, who also is chair of the American Society of Anesthesiologists’ Committee on Environmental Health, outlined the process needed to get hospitals to alter their approach to inhalational gases.

“First, there has to be a very simple recognition that climate change is a problem, and second, that healthcare is part of the problem,” Sherman said. “And third, that there are very simple things that we can and ought to do to minimize our impact.”

The publication of these new anesthesia guidelines comes amid growing interest among physicians in addressing climate change and rising challenges to government efforts to mandate change.

This is reflected in two recent statements from the American Medical Association (AMA). On June 13, the American Medical Association (AMA) adopted a policy that declared climate change to be a public health crisis that threatens the health and well-being of all people. The new policy specifically advocates for policies that limit global warming to no more than 1.5° C, reduce US greenhouse gas emissions with an aim at carbon neutrality by 2050, and support rapid implementation and incentivization of clean energy solutions and significant investments in climate resilience through a climate justice lens.

And on June 30, the AMA issued a statement saying it was “deeply disappointed” with a US Supreme Court opinion that restricted the ability of the Environmental Protection Agency to regulate carbon emissions.

“As physicians and leaders in medicine, we recognize the urgency of supporting environmental sustainability efforts to help halt global climate change and the devastating health harms that it is sure to bring,” said Jack Resneck, Jr, MD, president of the AMA, in a statement. “Despite this ruling, we will continue to do our part to protect public health and improve health outcomes for our patients across the nation.”

Sherman told Medscape that she was “thankful to the AMA for such a strong and clear statement on the SCOTUS ruling.”

“The SCOTUS ruling limiting EPA’s power to address climate change is a blow to public health of Americans. This decision will enable more pollution, cost citizens their health and lives, increase healthcare demand and costs, and decrease health system resilience,” she said.

In their guidelines, Sherman and co-authors cite several examples of cases in which hospitals changed their practices to reduce the impact of anesthesia.

Harriet W. Hopf, MD, of the University of Utah, told Medscape that examples in the article from Sherman and colleagues will be helpful to her fellow anesthesiologists should they want to reduce pollution at their own hospitals. It takes some commitment to ask anesthesiologists to shift away from some practices and habits they know well and to try other ones, such as trying total intravenous anesthesia, Hopf said.

Grand rounds on sustainability and articles such as the one from Sherman and co-authors can help make the case for investing time to adapt anesthesiology practice, Hopf said. She also recommends the Gassing Greener app developed by Yale University’s Department of Anesthesiology. It features two calculators that provide reports on carbon emissions that are based on clinician and facility use of inhaled anesthetics.

The app includes an estimate of carbon emissions for anesthesia, which is broken down in terms of equivalent emissions for driving. This makes it easier to understand the impact of different choices of gases in comparison with presenting abstract numbers about CO2, Hopf explained.

“Our challenge is to help anesthesiologists see that it’s not just about that individual patient” when considering approaches that will cause less pollution, she said.

“It’s about creating a world where individual patients coming for care are healthier.”

Brian Chesebro, MD, told Medscape the article from Sherman and co-authors may help speed what’s normally a slow process when it comes to changing the way medicine is practiced. In addition to his work as an anesthesiologist, Chesebro serves as the medical director for environmental stewardship for the Oregon region of Providence Health.

Like Sherman and Hopf, he agreed that the examples cited in the Anaesthesia article were of larger health systems that had accepted a need to reduce pollution. He said that many individual clinicians no longer see climate change as a future threat but as one that already is having an impact on patients. In his own region, clinicians already are seeing patients with what Chesebro calls “climate-related injuries” due to heat and smoke from wildfire smoke, underscoring the urgency for action to reduce pollution as much as possible.

“As smaller hospitals and other health systems start having to live this reality, I think they will continue to move toward putting energy and time and effort into addressing this intersection between climate and health,” he said.

Sherman and co-authors, Hopf, and Cheseboro have disclosed no relevant financial relationships.

Kerry Dooley Young is a freelance journalist based in Washington, DC. She is the core topic leader on patient safety issues for the Association of Health Care Journalists. Young earlier covered health policy and the federal budget for Congressional Quarterly/CQ Roll Call and the pharmaceutical industry and the Food and Drug Administration for Bloomberg. Follow her on Twitter at @kdooleyyoung.