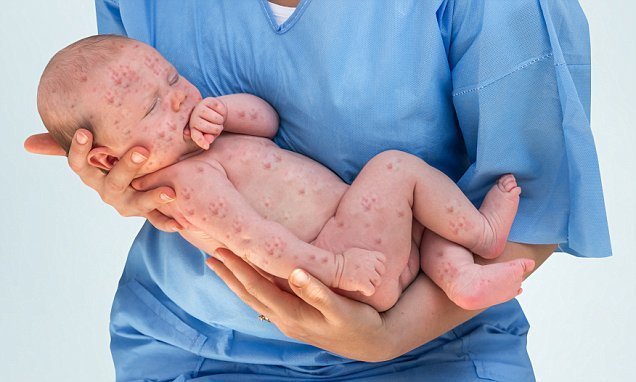 Measles outbreak warning: More than 400 cases in England are confirmed as an epidemic spreads throughout Europe and parents are urged to vaccinate their children

More than 400 people in England have been struck down with measles so far this year, new figures reveal.

Between January 1 and May 9, 440 cases were confirmed, with London being the worst hit, according to data from Public Health England (PHE).

PHE claims travel between European countries experiencing measles epidemics is behind England’s outbreak, as well as people failing to take up the recommended measles, mumps and rubella (MMR) vaccines.

Dr Mary Ramsay, head of immunisation at PHE, said: ‘The majority of cases we are seeing are in teenagers and young adults who missed out on their MMR vaccine when they were children.’

To prevent a measles outbreak, it is recommended that 95 per cent of the population is immunised against the infection. 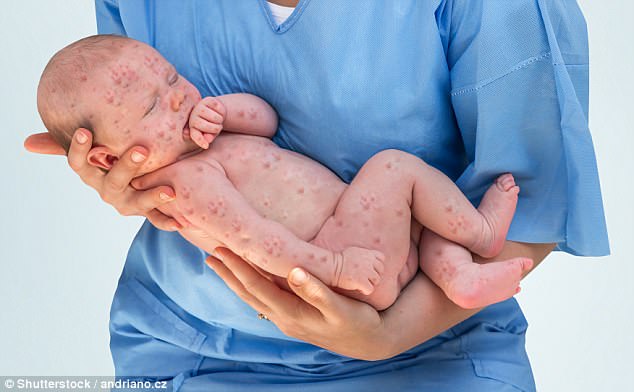 MEASLES DECLARED ‘ELIMINATED’ FROM THE UK JUST FOUR MONTHS AGO

The ‘elimination’ of measles has been achieved in the UK, global health leaders said in September.

The elimination of measles or rubella can be verified once a country has sustained ‘interruption of endemic transmission’ for at least 36 months, according to the World Health Organization (WHO).

The European Regional Verification Commission said the UK achieved elimination status for measles as of 2016.

Dr Mary Ramsay, head of immunisation at Public Health England, said: ‘We are delighted that the WHO has confirmed that the UK achieved measles elimination in 2016 and that rubella elimination continues to be sustained.

‘In addition, national vaccine coverage of the first MMR dose in five year olds has hit the WHO’s 95 per cent target.

‘This is a huge achievement and a testament to all the hard work by our health professionals in the NHS to ensure that all children and adults are fully protected with two doses of the MMR vaccine.

‘We need to ensure that this is sustained going forward by maintaining and improving coverage of the MMR vaccine in children and by catching up older children and young adults who missed out.’

Where in England are outbreaks occurring?

London has had the most measles cases, with a confirmed 164 incidences so far this year.

This is followed by the South East where 86 people have suffered since January 1.

The West Midlands has had 78 incidences and the South West 42.

West Yorkshire is also experiencing a local outbreak with 37 confirmed cases in just over five months.

Officials urge people to get vaccinated

Dr Ramsay said: ‘The measles outbreaks we are currently seeing in England are linked to ongoing large outbreaks in Europe.

‘The majority of cases we are seeing are in teenagers and young adults who missed out on their MMR vaccine when they were children.

‘Anyone who missed out on their MMR vaccine in the past or are unsure if they had two doses should contact their GP practice to catch-up.

‘This serves as an important reminder for parents to take up the offer of MMR vaccination for their children at 1 year of age and as a pre-school booster at three years and four months of age.

She added: ‘We’d also encourage people to ensure they are up to date with their MMR vaccine before travelling to countries with ongoing measles outbreaks.

‘The UK recently achieved World Health Organization (WHO) measles elimination status and so the overall risk of measles to the UK population is low, however, we will continue to see cases in unimmunised individuals and limited onward spread can occur in communities with low MMR coverage and in age groups with very close mixing.’

The WHO claims people’s fear of vaccines, along with complacency, means many, particularly young children, are unprotected. 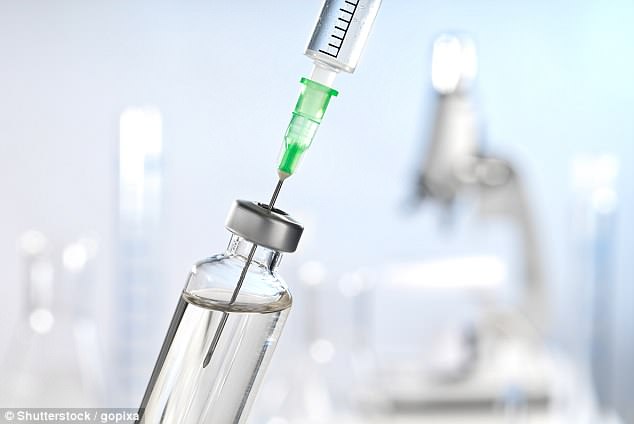 To prevent a measles outbreak, 95 per cent of the population should be vaccinated (stock)

Earlier this year, the WHO warned measles was spreading across Europe in regions where vaccination rates are low, such as Poland, Switzerland and Ukraine.

Data published in November last year by the European Centre for Disease Prevention and Control in the Communicable Disease Threat Report show that from January 2016 to November 2017, more than 19,000 measles cases were reported in the EU, including 46 deaths.

The highest number of cases in 2017 were reported in Romania, where 7,759 people suffered, followed by Italy with 4,775 cases and Germany with 898 sufferers. Greece also experienced a measles outbreak, with at least 368 cases, and one death, since May 2017.

Dr Ramsay said: ‘Due to ongoing measles outbreaks within Europe, we will continue to see imported measles cases in the UK in unimmunised individuals.

‘This serves as an important reminder for parents to take up the offer of MMR vaccination for their children when offered at one year of age and as a pre-school booster at three years, four months of age.’

WHAT IS MEASLES, WHAT ARE THE SYMPTOMS AND HOW CAN YOU CATCH IT?

Measles is a highly contagious viral infection that spreads easily from an injected person by coughing, sneezing or even just breathing.

Symptoms develop between six and 19 days after infection, and include a runny nose, cough, sore eyes, a fever and a rash.

The rash appears as red and blotchy marks on the hairline that travel down over several days, turning brown and eventually fading.

Some children complain of disliking bright lights or develop white spots with red backgrounds on their tongue.

In one in 15 cases, measles can cause life-threatening complications including pneumonia, convulsions and encephalitis.

‘[It] can cause encephalitis which is inflammation of the brain.

‘Encephalitis can result in death or disability.’

Measles can be prevented by receiving two vaccinations, the first at 13 months old and the second at three years and four months to five years old. 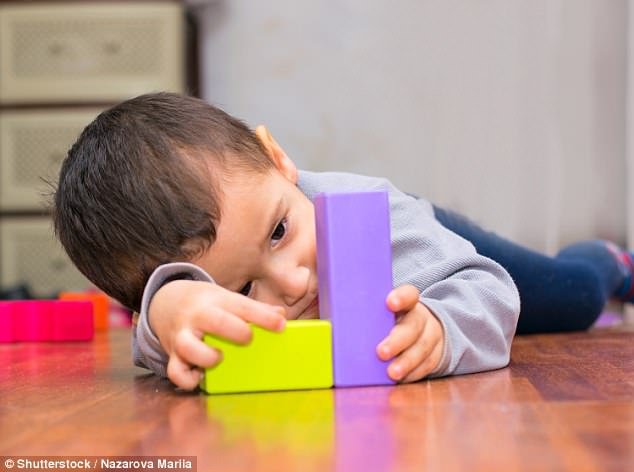 ARE AUTISTIC CHILDREN MISSING OUT ON VACCINATIONS?

Autistic children are missing out on life-saving vaccinations, research suggested in March 2018.

Only 81.6 per cent of those on the autism spectrum have received all the recommended vaccinations for children aged between four and six years old, a study found.

For those without the developmental disability, 94.1 per cent have had the necessary jabs, including diptheria, polio, and measles, mumps and rubella (MMR), the research adds.

Lead author Dr Ousseny Zerbo, from Kaiser Permanente, California, said: ‘These findings suggest that children with autism and their younger siblings may be at greater risk of vaccine-preventable diseases.

‘Vaccine hesitancy or refusal may play a role in children not getting properly vaccinated.’

Results further suggest just 89.1 per cent of children with autism have been vaccinated against diptheria, tetanus and whooping cough, compared to 96.6 per cent of youngsters without the disorder.

Only 84 per cent of autistic children are protected against MMR versus 95.9 per cent who do not suffer such developmental and behavioural challenges.

The younger siblings of autism sufferers are also missing out, with 6.8 per cent receiving fewer vital jabs than their peers.

Dr Nicholas Wood, from Sydney University, who was not involved in the study, added: ‘Parents of autism spectrum disorder kids may be worried; they may still feel that the MMR vaccine led to autism.

‘And that a second dose may cause a regression.’

In 1995 the gastroenterologist Andrew Wakefield published a study in The Lancet showing children who had been vaccinated against MMR were more likely to have bowel disease and autism.

He speculated that being injected with a ‘dead’ form of the measles virus causes disruption to intestinal tissue, leading to both of the disorders.

After a 1998 paper further confirmed this finding, Wakefield said: ‘The risk of this particular syndrome [which he termed autistic enterocolitis] developing is related to the combined vaccine, the MMR, rather than the single vaccines.’

At the time, Wakefield had a patent for single MMR vaccines and was therefore accused of having a conflict of interest.

Nonetheless, MMR vaccination rates in the US and UK plummeted, until, in 2004 the then-editor of The Lancet Dr Richard Horton described Wakefield’s research as ‘fundamentally flawed’, adding he was paid by attorneys seeking lawsuits against vaccine manufacturers.

On January 6 2011, The British Medical Journal published a report showing that of the 12 children included in Wakefield’s 1995 study, at most two had autistic symptoms post vaccination, rather than the eight he claimed.

At least two of the children also had developmental delays before they were vaccinated, yet Wakefield’s paper claimed they were all ‘previously normal’.

Further findings revealed none of the children had autism, non-specific colitis or symptoms within days of receiving the MMR vaccine, yet the study claimed six of the participants suffered all three.