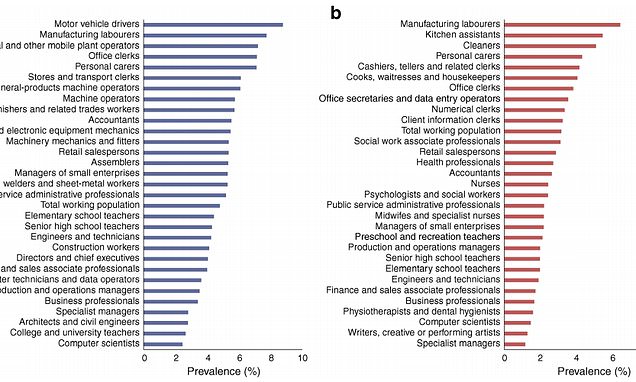 Workers in manufacturing, driving and cleaning jobs ‘are more likely to get type 2 diabetes because of their unhealthy lifestyles’

Workers in manufacturing, driving and cleaning jobs are more likely to get type 2 diabetes, according to a study of almost five million people.

They face a two to threefold increase in risk compared with teachers, physiotherapists and dentists.

Scientists blamed unhealthy lifestyle choices, such as a lack of exercise and smoking, for the ‘striking differences’. 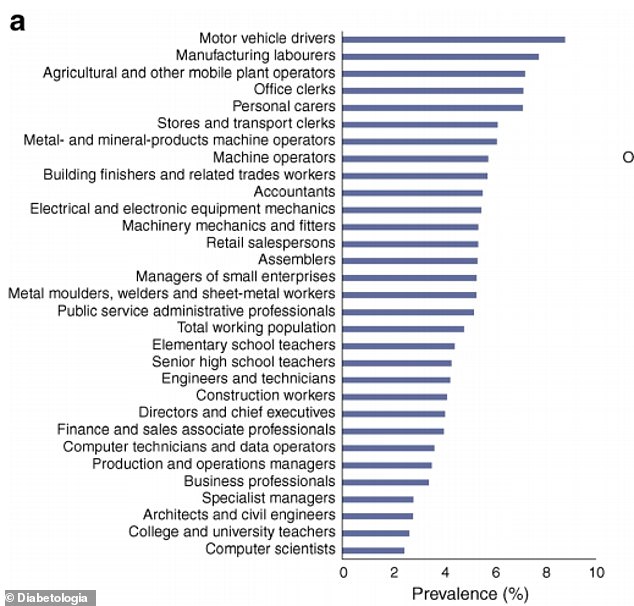 Figures showed across occupations, prevalence of type 2 diabetes in men ranged from 8.8 per cent in motor vehicle drivers to 2.5 per cent in male computer scientists

If bosses helped their employees to live healthily, the researchers estimated almost half of type 2 diabetes cases could be avoided.

WHAT IS TYPE 2 DIABETES?

Type 2 diabetes is a condition which causes a person’s blood sugar to get too high.

More than 4million people in the UK are thought to have some form of diabetes.

Type 2 diabetes is associated with being overweight and you may be more likely to get it if it’s in the family.

The condition means the body does not react properly to insulin – the hormone which controls absorption of sugar into the blood – and cannot properly regulate sugar glucose levels in the blood.

Excess fat in the liver increases the risk of developing type 2 diabetes as the buildup makes it harder to control glucose levels, and also makes the body more resistant to insulin.

Weight loss is the key to reducing liver fat and getting symptoms under control.

It can lead to more serious problems with nerves, vision and the heart.

The study by the Karolinska Institute in Stockholm looked at 30 of the most common occupations and covered 4,550,892 Swedes.

Researchers followed up the incidence of diabetes at age 35 or over in participants from 2006 to 2015. They found that 4.2 per cent of the working population had the illness but the rate in men ranged from 8.8 per cent in motor vehicle drivers to 2.5 per cent in computer scientists.

The range for women was from 6.4 per cent in manufacturing to 1.2 per cent among specialist managers. Factory workers had up to 80 per cent more risk of developing diabetes than the general working population.

But male university teachers and female physiotherapists and dentists had a 45 per cent reduced risk.

The study’s authors said: ‘To reduce the future diabetes burden it is crucial to curb the inflow of new patients. If a job title can be used as a risk indicator of type 2 diabetes, it can be used to identify groups for targeted interventions, and hopefully inspire employers to implement prevention programmes tailored to their workforces.’

The researchers also looked into lifestyle habits and found a clear link between diabetes and obesity and lack of exercise.

Dr Katarina Kos, a senior lecturer in diabetes and obesity at the University of Exeter, said: ‘This study shows that certain working environments require an increasing focus in introducing lifestyle change.

‘Increasingly we learn that sedentary jobs with little flexibility to take intermittent breaks are unhealthy in the longer term.’

Emma Elvin, a senior clinical adviser at Diabetes UK, said: ‘The important point to make clear here is that this study does not suggest that doing manufacturing, driving or cleaning jobs directly increase your risk.’

The study will be will be published in the journal Diabetologia.

WHICH JOBS HAVE THE HIGHEST PREVALENCE OF TYPE 2 DIABETES IN MEN?

Agricultural and other mobile plant operators – 7.21%

WHICH JOBS HAVE THE HIGHEST PREVALENCE OF TYPE 2 DIABETES IN WOMEN?

WHAT WAS THE PREVALENCE OF TYPE 2 DIABETES IN EACH FEMALE PROFESSION?

Cooks, waitresses and housekeepers – 4.06 per cent

Managers of small enterprises – 2.18 per cent

Engineers and technicians – 1.9 per cent

Psychologists and social workers – 2.42 per cent

Preschool and recreation teachers – 2.12 per cent

Production and operations managers – 1.99 per cent

Midwifes and specialist nurses – 2.19 per cent

Physiotherapists and dental hygienists – 1.60 per cent

WHAT WAS THE PREVALENCE OF TYPE 2 DIABETES IN EACH MALE PROFESSION?

Agricultural and other mobile plant operators – 7.21 per cent

Stores and transport clerks – 6.12 per cent

Machinery mechanics and fitters – 5.36 per cent

Managers of small enterprises – 5.29 per cent

Engineers and technicians – 4.26 per cent

Directors and chief executives – 4.06 per cent

Production and operations managers – 3.53 per cent

Architects and civil engineers – 2.8 per cent

College and university teachers – 2.65 per cent