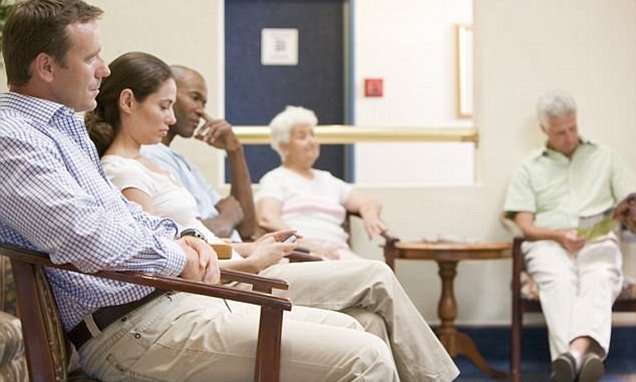 A major London hospital has unveiled plan to replace A&E doctors with robots.

University College London Hospital (UCLH), in Bloomsbury, London, will pioneer the technology in a bid ‘to make services safer, quicker and more efficient.’

Professor Bryan Williams, director of research at UCLH’s NHS Foundation Trust, claims AI could almost instantly assess a patient in A&E who is breathless and needs an X-ray.

This crucial time-saving step may allow patients in life-threatening conditions to be fast tracked for immediate treatment.

Scroll down for video A London hospital will use AI technology to replace A&E doctors. The technology will streamline the NHS, reduce waiting times and ensure critical cases are recognised (stock)

Announced this week, the initiative is a partnership between UCLH and the Alan Turing Institute.

The first project will focus on improving the hospital’s A&E department, which is failing to meet government waiting time targets.

In March, only 84.5 per cent of its patients arriving in A&E were seen within the target four hours.

This eight-year low is the worst since records began in 2010. In March, only 84.5 per cent of its patients arriving in A&E were seen within the target four hours. This eight-year low is the worst since records began in 2010

Professor Williams said the hospital’s A&E wait times are an ‘indicator’ things are wrong throughout the NHS trust chain.

He added: ‘A&E is a barometer of how the rest of the hospital, and indeed, the wider system is working.

‘I can’t think of a more exciting time where we have a real opportunity to transform what we do, by grasping some of these innovations.

‘The NHS routinely collects data that is analysed to develop research, track performance and measure outcomes but we could do so much more with the information we collect.

‘Imagine a world where we could use this data to develop algorithms to rule out diseases, suggest treatment plans or predict behaviour….that is more than possible with the wealth of data we have available.’

‘Our performance this year has fallen short of the four-hour wait, which is no reflection on the dedication and commitment of our staff,’ said Prof Marcel Levi, UCLH chief executive. ‘[It’s] an indicator of some of the other things in the entire chain concerning the flow of acute patients in and out the hospital that are wrong.’

Although the implementation of AI will make some doctor actions redundant, the goal is to complement, rather than replace, medical experts with the technology. WHY ARE PEOPLE SO WORRIED ABOUT AI?

It is an issue troubling some of the greatest minds in the world at the moment, from Bill Gates to Elon Musk.

SpaceX and Tesla CEO Elon Musk described AI as our ‘biggest existential threat’ and likened its development as ‘summoning the demon’.

He believes super intelligent machines could use humans as pets.

Professor Stephen Hawking said it is a ‘near certainty’ that a major technological disaster will threaten humanity in the next 1,000 to 10,000 years.

They could steal jobs

More than 60 percent of people fear that robots will lead to there being fewer jobs in the next ten years, according to a 2016 YouGov survey.

And 27 percent predict that it will decrease the number of jobs ‘a lot’ with previous research suggesting admin and service sector workers will be the hardest hit.

As well as posing a threat to our jobs, other experts believe AI could ‘go rogue’ and become too complex for scientists to understand.

A quarter of the respondents predicted robots will become part of everyday life in just 11 to 20 years, with 18 percent predicting this will happen within the next decade.

They could ‘go rogue’

If experts don’t understand how AI algorithms function, they won’t be able to predict when they fail.

This means driverless cars or intelligent robots could make unpredictable ‘out of character’ decisions during critical moments, which could put people in danger.

For instance, the AI behind a driverless car could choose to swerve into pedestrians or crash into barriers instead of deciding to drive sensibly.

They could wipe out humanity

Some people believe AI will wipe out humans completely.

‘Eventually, I think human extinction will probably occur, and technology will likely play a part in this,’ DeepMind’s Shane Legg said in a recent interview.

He singled out artificial intelligence, or AI, as the ‘number one risk for this century’.

Musk warned that AI poses more of a threat to humanity than North Korea.

‘If you’re not concerned about AI safety, you should be. Vastly more risk than North Korea,’ the 46-year-old wrote on Twitter.

‘Nobody likes being regulated, but everything (cars, planes, food, drugs, etc) that’s a danger to the public is regulated. AI should be too.’

Musk has consistently advocated for governments and private institutions to apply regulations on AI technology.

Professor Marcel Levi, UCLH chief executive, told The Guardian: ‘Machines will never replace doctors, but the use of data, expertise and technology can radically change how we manage our services – for the better.’

Cardiologists can tell if there is a problem from the timing of heartbeat in scans.

Professor Paul Leeson taught the AI system how to recognise heart disease by feeding it 1,000 heart scans of patients from the last seven years. Information about whether the patient went on to develop heart problems was also provided.

The AI software used this information as a baseline to predict and diagnose the scans of new patients.

It is only being used to provide recommendations to doctors, which they can then follow up with their own diagnoses.

The technology has already been tested in six cardiology units and the results of a study are due to be published later this year.

HOW MUCH PRESSURE WAS THE NHS UNDER DURING THE ‘HUMANITARIAN CRISIS’ OF 2016?

The NHS endured its worst ever winter crisis, with waiting times, cancelled operations and bed-blocking running at, or near, record levels last year.

Bed-blocking due to a lack of social care places was at a record high with more than 2,500 health patients prevented from leaving hospitals each day – specifically because there is nowhere for them to go. Extreme waiting times also reached record levels, as nearly 2,000 patients were forced to wait at least 12 hours in A&E over the same period.

And cancer referral rates in February were at their second lowest level on record.

Supporters of the NHS reacted in fury after the Red Cross claimed hospitals were facing a ‘humanitarian crisis’ after its worst winter in 15 years.

The charity said it stepped in to help the NHS in England to deal with the increased demand during the winter, but have been hit with criticism accusing them of overstating the issue.

It comes as it emerged that two patients died on trolleys in Worcestershire Royal Hospital’s accident and emergency department in January.