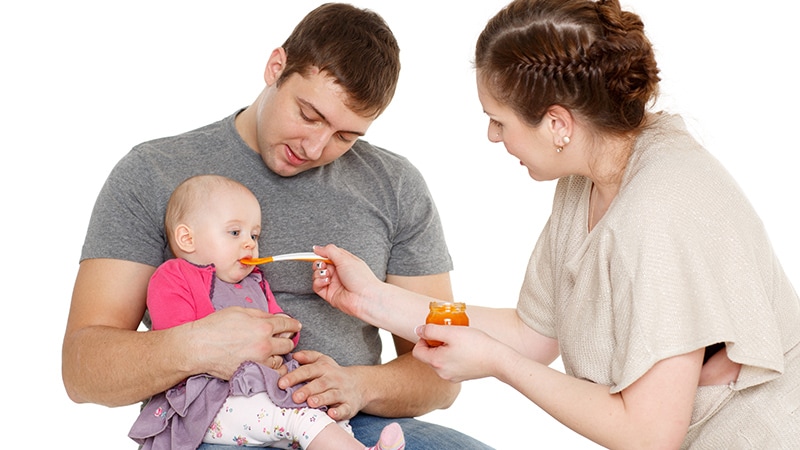 LILLE, France ― Although in many cases, food-allergen tolerance can be achieved with oral immunotherapy, primary prevention of food allergies remains crucial, according to the French Society of Allergology. In new recommendations that were presented at a session of the Congress of French Pediatric Societies, the academic society advocated early introduction of allergens for all children, starting at 4 months of age.

The latest prevention data from two major studies, LEAP and EAT (see box), have prompted European and French experts to rethink their stance on food diversification. The new French proposals were recently published under the coordination of Dominique Sabouraud-Leclerc, MD, Pediatrics Department, Reims University Hospital, France, on behalf of the Food Allergy Working Group of the French Society of Allergology.

For all newborns, regardless of whether they have a history of atopic or nonatopic dermatitis, food diversification is now recommended from 4 months of age instead of 6 months, as was previously recommended. If the child does not develop atopic dermatitis or develops only a mild form, peanuts, eggs, and nuts may be introduced at home.

However, if the child experiences severe atopic dermatitis, an allergy testing panel for peanuts, nuts, eggs, and cow’s milk proteins should be performed. An oral food challenge may be conducted at the allergist’s discretion.

Regarding peanuts, the working group proposed introducing a purée in the form of either a mixture of peanuts/hazelnuts/cashew nuts (1 level teaspoon five times a week; 2 g of protein/food/week) or a 100% peanut paste (1 scant teaspoon four times a week; 2 g of peanut protein/week). If the family is worried, the allergist can suggest monitoring the child in the clinic waiting room for 30 minutes after the first dose.

“We shouldn’t delay the introduction of the primary allergens anymore, regardless of whether children are at risk for a food allergy, and particularly a peanut allergy,” explained Stéphanie Lejeune, MD, pediatric pulmonologist and allergist at Lille Regional University Hospital, who presented these new findings at the congress. “In fact, if we only target at-risk children, we overlook children with no family history who will nevertheless develop food allergies. The idea is to introduce everything, especially peanuts, between 4 and 6 months of age and to no longer do so gradually, one food after another, as was being done until now, beginning at 6 months and over. We must give priority to regularity over quantity.”

Although this approach is based on clinical trials, no real-life data are currently available.

A study from 2021 summed up the risk factors for peanut allergy. Sixty-one percent of infants (4–11 months) had atopic dermatitis, 18% had a food allergy, 62% had a first-degree relative with a peanut allergy, and 11% had a confirmed peanut allergy. The risk of peanut allergy increased with age and severe eczema.

In 2015, the LEAP study, which was conducted in the United Kingdom with 640 infants aged 4–11 months who had risk factors for peanut allergy, revolutionized peanut-allergy primary prevention. Regardless of whether the children were sensitized or not, the number of children who developed a peanut allergy was systematically lower in the group that ingested the allergen in comparison with the “avoidance” group.

Additionally, the LEAP-ON study showed that protection against peanut allergy persisted for 12 months after cessation of consumption between ages 5 and 6 years among children who had consumed peanuts previously.

Early diversification in the general population was investigated in the EAT study, which involved 1303 breastfed infants. Of these infants, 24% had atopic dermatitis (median SCORAD score, 7.5). They were divided into two arms: avoidance and breast feeding until 6 months (standard introduction) or early introduction at 3 months (boiled egg, milk, peanuts, sesame, white fish, wheat, 2 g of protein twice a week). In the per protocol analysis, there were 13 cases of peanut allergy in the standard introduction group; there were no cases in the early introduction group.

This article was translated from the Medscape French edition.