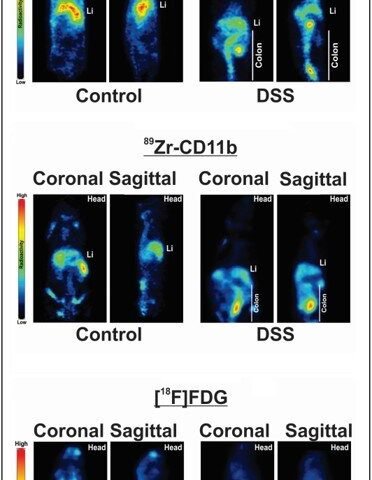 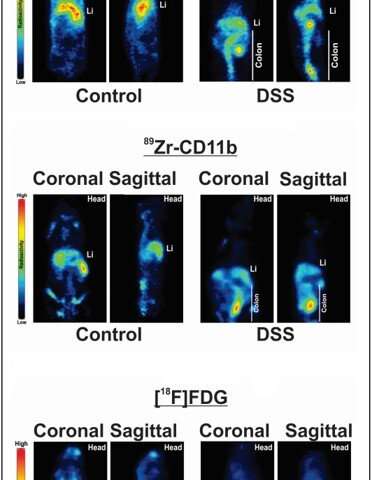 Inflammation in inflammatory bowel disease (IBD) can be quickly and precisely diagnosed using a new type of nuclear medicine scan, according to research published in the June issue of The Journal of Nuclear Medicine. Using immuno-positron emission tomography (immuno-PET) to image monoclonal antibodies directed against specific innate immune cell markers, investigators were able to effectively assess IBD in murine models. In addition, immuno-PET has high potential for theranostic diagnosis and precision treatment of IBD and other inflammatory diseases.

IBD, encompassing Crohn’s disease and ulcerative colitis, is characterized by chronic relapsing and remitting inflammation of the lower gastrointestinal tract. According to the Centers for Disease Control and Prevention, approximately three million adults in the United States live with IBD. These diseases require constant monitoring due to the flare-up of symptoms and the increased risk of developing colon cancer.

“The diagnosis and maintenance of IBD is heavily reliant on endoscopy, which is invasive and does not provide real-time information regarding the role of specific mediators and drug targets,” said Patrick A. Hughes, Ph.D., head of the Gastrointestinal Neuro-immune Interactions Group, Centre for Nutrition and Gastrointestinal Disease at the University of Adelaide in Australia. “There is a need to develop less invasive tools that provide quick diagnostic information for IBD. This is particularly relevant when the area of inflammation is beyond the reach of the endoscope, such as difficult-to-access regions of the small intestine, and in patient populations that have increased risk in endoscopy, including pediatrics and hemophiliacs.”

Activation of the innate immune system is intimately linked to inflammation in IBD. Innate immune cells are marked by the cell surface receptor CD11b, and they secrete IL-1β to generate immune responses. In the study, the authors compared the ability of immuno-PET with 89Zr-conjugated antibodies against IL-1β and CD11b versus the ability of 18F-FDG PET and magnetic resonance imaging (MRI) to detect inflammation in colitic mice.

To evaluate the imaging methods, mice with ulcerative colitis were assessed daily for signs of acute colitis. Healthy mice were age- and weight-matched to the colitic mice, and comparisons were made regarding body weight loss, colon shortening and epithelial barrier permeability. Researchers then measured the levels of IL-1β and CD11b concentration, determining that the colitic mice had increases in these innate immune mediators.