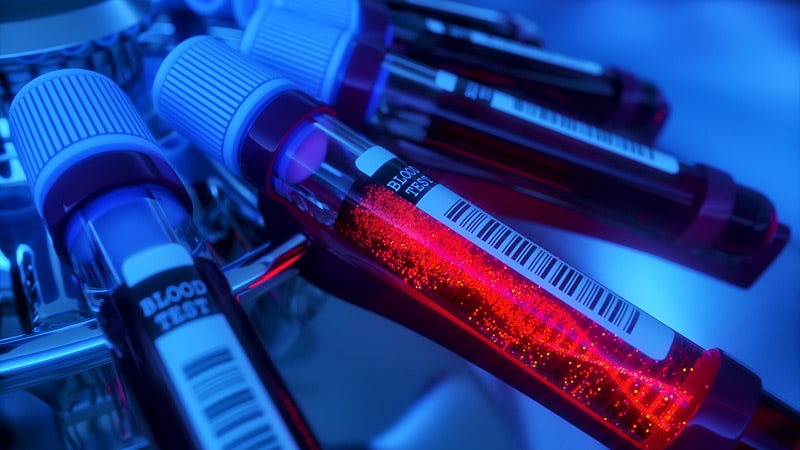 More evidence points to the benefits of germline genetic testing for patients with various cancers. Such testing can identify mutations that may warrant a change of treatment and allow trying a targeted therapy, and it can also guide screening for high-risk individuals and their family members.

The new data come from a series of studies presented at the recent American Society of Clinical Oncology (ASCO) 2021 virtual annual meeting. The studies were conducted in collaboration with or were sponsored by the medical genetics company Invitae.

One study, which involved patients with prostate cancer (abstract 10504), found that 10.8% of patients had pathogeneic variants and that 15% of these variants were BRCA1/2 mutations, which call for treatment with a PARP inhibitor.

However, the oncology community has been slow to adopt routine testing, and several studies showed that many oncologists are not yet incorporating genetic testing into routine cancer care.

Colorectal cancer (CRC) is a good example: clinical guidelines recommend germline genetic testing for all patients, and at least one large US insurer reimburses such testing. Yet a study that included 55,595 individuals found that only 6% had been tested (abstract 10514).

“Overly restrictive, complicated, and ineffective testing guidelines are certainly a major barrier that exclude patients who would benefit from testing,” he said.

Many of the professional guidelines are still rooted in the state of clinical genetics from years ago, when testing was expensive and its utility less well understood. This led to restrictive guidelines designed to ration access, he commented.

Costs have now fallen significantly, and there is growing evidence that supports expanding the criteria for genetic testing, he said. However, guidelines have been slow to change.

“This reluctant pace of change means payer policy is also lagging, further limiting patient access to critical genetic information,” said Esplin. “Although companies like ours have low patient-pay prices, the lack of reimbursement remains a barrier for a substantial number of patients.

“Finally, I think there may be some reticence among oncologists, based on a lack of understanding of the role germline variants play in influencing cancer incidence, treatment, and recurrence,” he added.

Esplin believes that oncologists need ongoing education and updates about screening. “It’s one reason that we presented this data at ASCO ― oncologists and physicians in general need to know and understand the vital importance of germline genetic testing in determining a patient’s treatment and longer-term management plan,” he said.

He hopes that “as more studies like ours and others are presented and published, and as guidelines committees meet and evaluate, we’ll see the pace of change markedly accelerate.”

Very few patients received germline genetic testing ― 8.1% in the commercial group and 3.8% in the Medicare group.

Of the 788 patients whose results were available for review, 143 (18%) had pathogenic/likely pathogenic variants in genes, including MSH2, MLH1, PMS2, MSH6, CHEK2, APC, BRCA2, ATM, and MUTYH.

“So 44% of patients could be potentially eligible for precision therapies, like PD1 and PDL1 inhibitors, based on pathogenic variants in a Lynch syndrome mismatch repair genes,” she noted.

In a discussion of the paper, Milan Radovich, PhD, an associate professor at the Indiana University Melvin and Bren Simon Comprehensive Cancer Center, Indianapolis, Indiana, pointed out that although genetic testing was covered under an insurance policy, there was little uptake.

Yet, the results show that among the patients whose tumors harbored a germline alteration, 92% would have been eligible for changes in their management.

“Taken together, patients with colorectal cancer benefit from broad germline genetic testing and have implications for therapeutic decision making as well as for identification of at-risk relatives,” he said. “Given the prevalence of germline pathogenic mutations in a cancer population, broad-based germline testing is warranted with appropriate pre- and posttest counseling.”

These findings suggest that the current criteria are disproportionately placing Black patients at a disadvantage, he said.

Of patients with pathogenic variants, 12.3% of patients met NCCN criteria, and 9.6% of patients did not. There was no statistically significant difference between the two groups, which lends further evidence that a significant number of variants are missed if NCCN guidelines are required for genetic testing.

The main take-home message from this study was that by adhering to NCCN guidelines, some germline carriers might be missed, commented Colin Pritchard, PhD, MD, ABPath, a faculty member in the Department of Laboratory Medicine and Pathology at the University of Washington, Seattle, Washington.

“So maybe we should rethink this, and maybe simplified testing might be considered,” he said in a discussion of the paper. “We might even consider germline genetic testing for all men with prostate cancer just to simplify things, even though it’s going to be fairly rare to detect mutations in low-risk disease.”