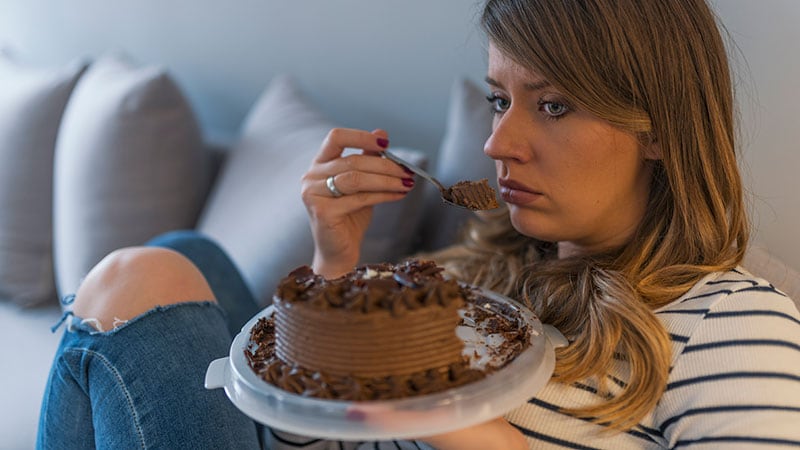 Eating in response to stress — known as emotional eating — was significantly associated with several markers of long-term cardiovascular damage, based on data from 1,109 individuals.

“We know diet plays a huge role in cardiovascular disease, but we have focused a lot of work on what you eat, not on what makes you eat” — the current study did exactly that, Martha Gulati, MD, who wasn’t involved in the study, said in an interview.

“Emotional eaters consume food to satisfy their brains rather than their stomachs,” study investigator Nicolas Girerd, MD, of the National Institute of Health and Medical Research (INSERM) and a cardiologist at the University Hospital of Nancy (France), wrote in a press release accompanying the study.

Both emotional eating and restrained eating have been linked to cardiovascular disease risk, the researchers noted. “Because of previous findings, we hypothesized that [emotional and/or restrained dimensions of eating behavior] are positively associated with cardiovascular damages, as well as with CV risk factors, such as metabolic syndrome,” they wrote.

In a study published in the European Journal of Preventive Cardiology, the researchers reviewed data from 916 adults and 193 adolescents who were participants in the STANISLAS (Suivi Temporaire Annuel Non-Invasif de la Santé des Lorrains Assurés Sociaux), a longitudinal familial cohort in France. Cardiovascular data were collected at four medical visits as part of a full clinical examination between 1993 and 2016, with one visit every 5-10 years. Roughly one-third (31.0%) of the adults were overweight, 7.9% were obese, and 2.7% were underweight. The median age of the adults at the second visit was 44.7 years; the median age of the adolescent group was 15.2 years.

The primary outcome of cardiovascular damage was measured at the fourth visit. Eating behavior was assessed during the second visit using the Dutch Eating Behaviour Questionnaire (DEBQ), and participants were identified as emotional eaters, restrained eaters, or external eaters.

Among the adults, emotional eating was associated with a 38% increased risk of diastolic dysfunction (odds ratio, 1.38; P = .02), over an average follow-up of 13 years, and this association was mediated by stress in 32% of cases. Emotional eating also was positively linked with a higher carotid-femoral pulse-wave velocity (cfPWV-beta), indicative of increased arterial stiffness. However, none of the three dimensions of eating behavior was associated with cardiovascular damage among the adolescents. In addition, none of the eating-behavior dimensions was tied to metabolic syndrome in the adult group (this association was not measured in the adolescents).

Energy intake had no apparent impact on any associations between eating behavior and CVD measures, Dr. Girerd said in the press release. “We might expect that emotional eaters would consume high-calorie foods, which would in turn lead to cardiovascular problems, but this was not the case. One explanation is that we measured average calorie intake and emotional eaters may binge when stressed and then eat less at other times,” and that the resulting “yo-yo” pattern might negatively affect the heart and blood vessels more than stable food intake, he said.

The study findings were limited by several factors, including the observational design that prevented conclusions of causality, the researchers noted. Other limitations included the use of a nonvalidated scale to measure stress, the lack of data on physical activity, and the use of a mainly healthy population in a limited geographic area, which may limit generalizability, they said.

More research is needed in other contexts and larger cohorts, but the results were strengthened by the large study population and the complete data on eating behaviors and detailed health information, they wrote. The results support previous studies and suggest that patients with emotional eating behavior could benefit from emotion regulation skills training, including cognitive, behavioral, psychological, and interpersonal therapies used in other areas, and from pharmacological treatments, the researchers concluded.

The current study offers a unique and important perspective on the relationship between diet and cardiovascular disease, Dr. Gulati, director of preventive cardiology at the Smidt Heart Institute at Cedars-Sinai Medical Center, Los Angeles, told this news organization.

“Examining eating behavior and its relationship with cardiovascular effects in healthy individuals in this prospective way is quite interesting,” said Dr. Gulati, who was not involved in the study.

The researchers examined healthy people at baseline, inquired about their eating habits, and found that emotional eaters “have evidence of cardiovascular changes when compared with the other groups of eaters, after controlling for other risk factors that are associated with cardiovascular disease when following them for 13 years,” said Dr. Gulati, who was recently named Anita Dann Friedman Endowed Chair in Women’s Cardiovascular Medicine and Research at Cedars-Sinai. “This same finding wasn’t seen in adolescents, but this is probably because they are younger, and the effects aren’t seen. That is reassuring, because it means that the more we address eating behaviors, the more likely we are to reduce their effects to the heart,” she noted.

“This study is important because usually, as cardiologists or anyone in medicine, how we assess diet is by assessment of what food people eat; we don’t usually ask about what triggers them to eat,” Dr. Gulati said. “Eating behaviors based on their triggers ultimately affect food choice and food quantity, and help us understand weight changes during a lifetime,” she said.

“I think we don’t have the data to know that an eating behavior would be able to affect cardiac function,” said Dr. Gulati, “but I think we all might hypothesize that emotional eating may be associated with abnormal diastolic function simply through eating high-density food and weight gain.”

The current study did not show a relationship between eating behavior and metabolic syndrome, in contrast with prior studies, Dr. Gulati noted. However, “the authors report that the association between eating behaviors and diastolic dysfunction was mediated through the stress level,” Dr. Gulati said. “It is important to note that this European population was healthy at baseline, and also relatively healthy 13 years later, which makes these findings even more profound.”

Dr. Gulati said that she agrees with the study authors on the need to assess diet and eating behaviors when assessing cardiovascular risk in patient. “Diet assessment as part of prevention is central, but we should ask not only ‘what do you eat,’ but also ‘what makes you eat,’ ” she said.

More research is needed in other populations, Dr. Gulati added. The current study population was healthy at baseline and follow-up. Studies are needed in cohorts in the United States and in the developing world to see how the results might differ; as well as in rural America or in “food deserts” where food choices are limited.

Another research topic is the interplay between eating behaviors and social determinants of health, in terms of their effect on cardiovascular function, Dr. Gulati said, “and it will be valuable to follow this cohort further to see how these eating behaviors and these intermediate measures translate into cardiovascular outcomes.” Future studies should also examine whether the changes in cardiac function are reversible by interventions to modify eating behavior, particularly emotional eating, she said.

Supporters of the study included the Regional University Hospital Center of Nancy, the French Ministry of Solidarity and Health, and a public grant overseen by the French National Research Agency. The researchers had no financial conflicts to disclose.

Dr. Gulati, who serves on the editorial advisory board of MDedge Cardiology, had no financial conflicts to disclose.