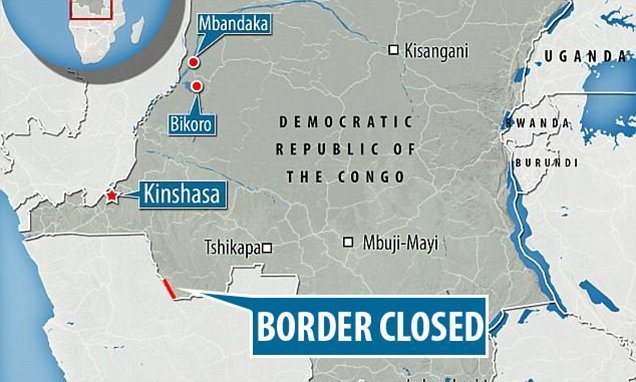 Ebola outbreak in the Democratic Republic of Congo that is feared to have killed 27 people is a ‘race against time’, aid worker warns

The Ebola outbreak in the Democratic Republic of Congo that is feared to have killed 27 people is a ‘race against time’, an aid worker has warned.

Paul Jawor, who has just returned home from the African nation, admitted he was ‘very scared’ about the killer virus in a written account of his time on the ground.

Officials in the DRC have already branded the fresh outbreak, which has seen 62 suspected cases, a ‘public health emergency’.

International help has flooded in as aid workers desperately battle to contain the outbreak. A mass vaccination campaign has also begun.

All neighbouring countries have been placed on high alert and Angola earlier this week shut a segment of its border to stop the spread of Ebola – considered one of the most lethal pathogens in existence.

Virologists fear the outbreak is ‘reminiscent’ of the 2014 Ebola pandemic, which decimated West Africa and killed more than 11,000 people.

Mr Jawor, a Doctors Without Borders and Médecins Sans Frontières water and sanitation expert, was sent to the DRC on May 20. 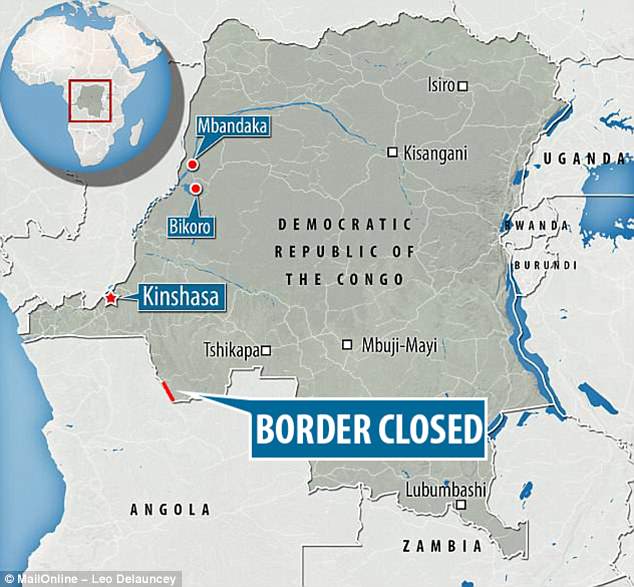 The current Ebola outbreak began in the poorly-connected region of Ikoko-Impenge and Bikoro. It has since travelled 80 miles (130km) north to Mbandaka. There is fears it will spread to Kinshasa –364 miles (586km) south on the river, where 12 million people live

‘A race against time’

He said: ‘With an outbreak like this, it’s a race against time, as one Ebola patient with symptoms can infect several people every day.

‘The best way to contain the disease is to put all measures in place as soon as possible.’

In a report on the DWB website, he spoke of his time battling Ebola in the Equateur province – where the current outbreak is focused.

Where did the outbreak begin?

The current Ebola outbreak began in the poorly-connected region of Ikoko-Impenge and Bikoro – in the north east of the DRC.

It has since travelled 80 miles (130km) north to Mbandaka, a port city on the river Congo – an essential waterway – with around 1.2 million inhabitants.

Virologists fear there is a ‘major concern’ it will spread to Kinshasa – 364 miles (586km) south on the river, where 12 million people live.

The city, which is the capital of the DRC, has an international airport with regular flights to European cities Zurich, Frankfurt and Brussels.

Dr Derek Gatherer, a virologist from Lancaster University, previously warned the fresh outbreak is ‘reminiscent’ of the 2014 Ebola pandemic.

In an editorial for a scientific journal, Dr Gatherer wrote: ‘The current outbreak has the potential for rapid expansion in numbers.

He added: ‘Mbandaka is a port on the River Congo, the main arterial transport link from DRC’s capital Kinshasa to inland cities.

‘With poor to non-existent provision of running water, sewage and electricity, the similarities with the urban situation… during the west African outbreak are obvious.’

‘The risk of transmission to Kinshasa – central Africa’s main megacity – either by river or by air from Mbandaka’s regional airport, is a major concern.’

Writing in the Journal of General Virology, he also warned the ‘question of how to prevent future Ebola outbreaks remains depressingly open’.

Dr Gatherer described the DRC basin as ‘Ebola’s heartland’. The virus – endemic in the country – is named after the Ebola river.

The current outbreak of Ebola is caused by the Zaire strain.

There has been 62 suspected cases since the beginning of the outbreak in April but only 38 have been confirmed in lab tests.

Details on this outbreak

In its last situation report, released Tuesday, the WHO said 880 contacts have been recorded and are ‘being followed up actively’.

‘Our country is facing another epidemic of the Ebola virus, which constitutes an international public health emergency,’ the Congo Health Ministry said earlier this month. 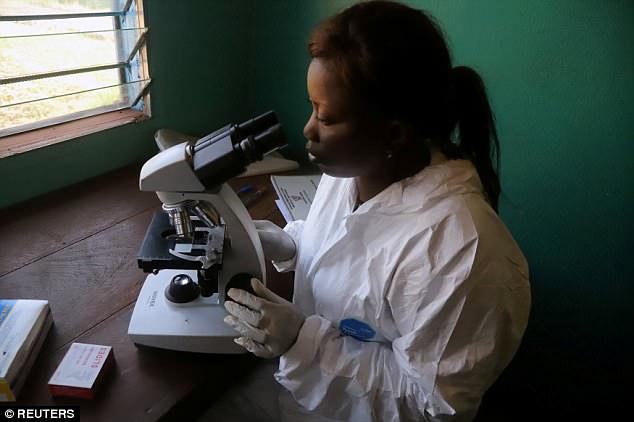 HAS THE DRC HAD AN EBOLA OUTBREAK BEFORE?

DRC escaped the brutal Ebola pandemic that began in 2014, which was finally declared over in January 2016 – but it was struck by a smaller outbreak last year.

Four DRC residents died from the virus in 2017. The outbreak lasted just 42 days and international aid teams were praised for their prompt responses.

The new outbreak is the DRC’s ninth since the discovery of Ebola in the country in 1976.

Health experts credit an awareness of the disease among the population and local medical staff’s experience treating for past successes containing its spread.

DRC’s vast, remote geography also gives it an advantage, as outbreaks are often localised and relatively easy to isolate.

Neighbouring countries have already been alerted about the new outbreak of Ebola, which can cause severe bleeding.

Kenya – which doesn’t border the country – earlier this month issued warnings over the possible spread of Ebola.

Thermal guns to detect anyone with a fever have been put in place along its border with Uganda and at the Jomo Kenyatta International Airport.

Concerned health officials in Nigeria, which also doesn’t border the DRC, have put similar measures in place to keep its population safe.

Angola shut a segment of its border with the DRC to prevent the spread of the Ebola virus – even though the outbreak has not yet reached the border.

Angolan officials closed the strip of land where Angolans and Congolese most commonly interact. A group of border patrol officers, nurses and veterinary doctors have also been deployed.

The 2014 international response to the Ebola pandemic drew criticism for moving too slowly and prompted an apology from the WHO.

But international aid teams have moved much quicker in response this time – with vaccination campaigns already underway in several regions.

Hundreds of locals and frontline health workers in Bikoro, Iboko and Mbandaka have already been given the experimental vaccine, known as rVSV-ZEBOV.

Currently, there are no proven Ebola vaccines – but the rVSV-ZEBOV has been shown to be effective in trials in Guinea during the pandemic.

WHAT IS EBOLA AND HOW DEADLY IS IT?

Ebola, a haemorrhagic fever, killed at least 11,000 across the world after it decimated West Africa and spread rapidly over the space of two years.

That pandemic was officially declared over back in January 2016, when Liberia was announced to be Ebola-free by the WHO.

The country, rocked by back-to-back civil wars that ended in 2003, was hit the hardest by the fever, with 40 per cent of the deaths having occurred there.

Sierra Leone reported the highest number of Ebola cases, with nearly of all those infected having been residents of the nation.

WHERE DID IT BEGIN?

An analysis, published in the New England Journal of Medicine, found the outbreak began in Guinea – which neighbours Liberia and Sierra Leone.

A team of international researchers were able to trace the pandemic back to a two-year-old boy in Meliandou – about 400 miles (650km) from the capital, Conakry.

Emile Ouamouno, known more commonly as Patient Zero, may have contracted the deadly virus by playing with bats in a hollow tree, a study suggested.

HOW MANY PEOPLE WERE STRUCK DOWN?

Figures show nearly 29,000 people were infected from Ebola – meaning the virus killed around 40 per cent of those it struck.

Cases and deaths were also reported in Nigeria, Mali and the US – but on a much smaller scale, with 15 fatalities between the three nations.

Health officials in Guinea reported a mysterious bug in the south-eastern regions of the country before the WHO confirmed it was Ebola.

Ebola was first identified by scientists in 1976, but the most recent outbreak dwarfed all other ones recorded in history, figures show.

HOW DID HUMANS CONTRACT THE VIRUS?

Scientists believe Ebola is most often passed to humans by fruit bats, but antelope, porcupines, gorillas and chimpanzees could also be to blame.

It can be transmitted between humans through blood, secretions and other bodily fluids of people – and surfaces – that have been infected.

IS THERE A TREATMENT?

The WHO warns that there is ‘no proven treatment’ for Ebola – but dozens of drugs and jabs are being tested in case of a similarly devastating outbreak.

Hope exists though, after an experimental vaccine, called rVSV-ZEBOV, protected nearly 6,000 people. The results were published in The Lancet journal.