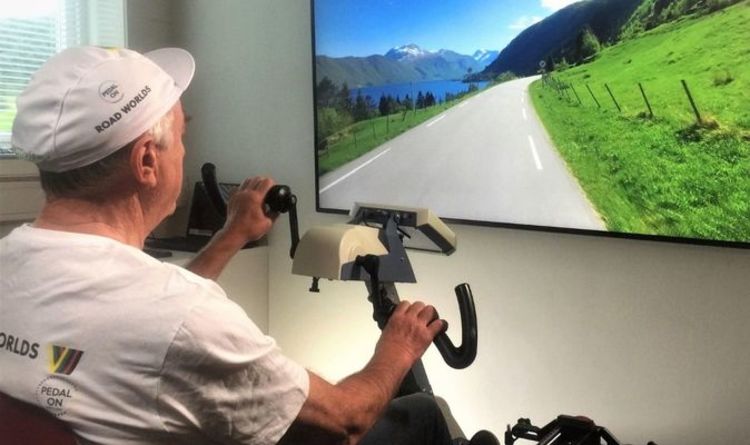 Rafael Nadal plays tennis against himself in virtual reality game

Virtual reality is something that is often associated with youth, and the technological savviness it brings.

A new technology being employed in care homes applies the technology in a new way to help patients.

It allows people to cycle through a virtual version of landscapes they grew up in.

The technology has been so popular with the elderly that some have cycled for thousands of kilometres, crossing nations and continents without leaving their care homes.

People as old as 103 have seen improvements in mobility and memory as a result of the exercise.

“We’ve had a former postman riding his old post route down in Somerset.

“The strongest improvement we saw was a planned amputation that was actually cancelled, because the blood circulation was improved due to the activity so they didn’t have to do the amputation.

“Really, if you think about it, it makes sense: if you do physical activity you do increase blood circulation, build strength, build balance, and prevent falls.”

READ MORE: Cancer warning: The type of fish that’s ‘known to cause cancer’ when eaten – pharmacist

The team began with a library of a few videos filmed while cycling the streets of Bergen, Norway.

Now they offer a catalogue of over 2,000 videos from 40 nations, while also producing new local content when introducing the technology to a new nursing home.

“We had an old a woman in Norway, who really wanted to cycle to a video from Singapore,” recalls Lavik.

“So they put on a video from Singapore and afterwards, she wanted to make a phone call.

“She called her grandchildren who lived in Singapore so she could then say, ‘Now I’ve seen where you live.’

“It shows the connectedness that comes out of this.”

The exercise bikes are adaptable to the needs of individuals, with some patients pedalling with their hands.

The first World Champion of their annual tournament suffered from Parkinson’s disease but found that regular cycling reduced the pain he felt.

This exemplifies Lavik’s mantra of “focus on ability rather than disability”.

He said: “I think we’ve an unfortunate tendency as a society to underestimate the potential and the strength in this part of our population.

“That is especially true for people with dementia and people living in long- term residential care.”

Research has shown that exercise, at all points of life, produces some protective effects against cognitive and physical decline.

Finding the right approach to exercise can present a challenge.

Ageing often leads to poor joint health that can make exercises such as running or jogging painful and difficult.

Exercises such as swimming takes some of the strain off the joints.

The use of virtually recreating live experiences is not unique to the Nordic tech start-up and has seen experimental use in a wide range of medical fields.

In addition to treating physical maladies it has also been experimented with as a method for treating mental conditions such as  phobias in controlled environments.

Earlier this month, researchers at  Edith Cowan University found that people are 30 percent more willing to confide negative experiences in a virtual reality avatar of a therapist than a live therapist.