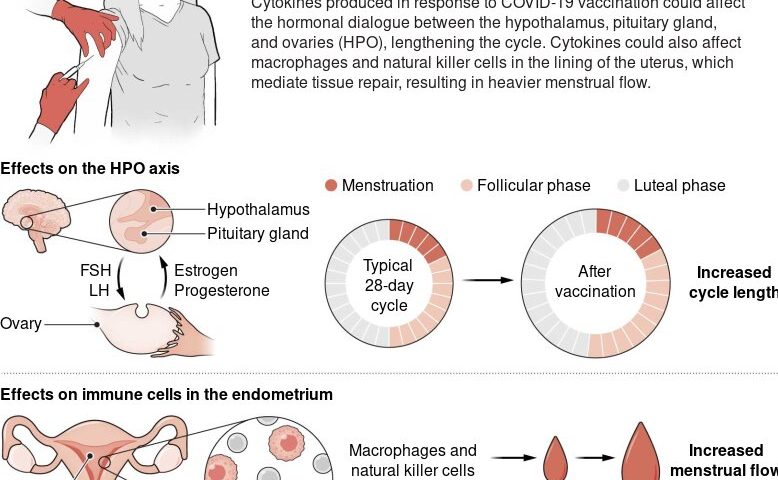 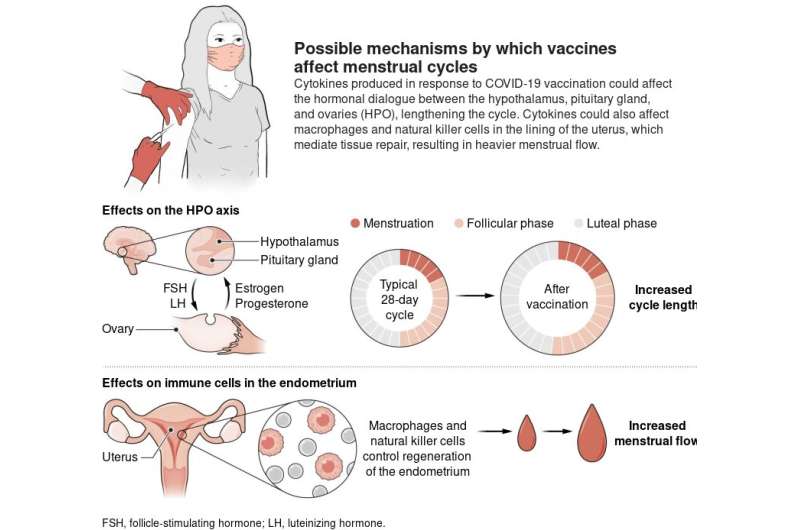 Victoria Male, a digestion and metabolism professor at Imperial College London, has published a Perspectives piece in the journal Science addressing reports of COVID-19 vaccines having various impacts on menstruation. In her article, she notes that thus far, research has shown that such vaccines can cause small, temporary changes in menstruation.

Shortly after vaccinations were introduced to protect people against COVID-19, women around the world began reporting changes to their periods after being vaccinated—some noticed longer cycles and others heavier bleeding. Because the reports did not suggest problems serious enough to investigate, the makers of the vaccines did not include testing for menstrual impact during their trials.

Male suggests that the result was hesitancy on the part of some women to be vaccinated, fearing that doing so could lead to other unknown problems, such as fertility issues. And this, she adds, added fuel to the fire of misinformation campaigns aimed at COVID-19 vaccines.

In her paper, Male notes that other researchers have since looked into the matter by conducting studies and in so doing have found evidence showing that some COVID-19 vaccines do indeed have an impact on the menstrual cycle—though, she notes, such impacts have been found to be both small and temporary. She also points out that it is still not known why this happens.

She suggests it might have something to do with the cytokines that are produced after inoculation and their impact on the signaling that occurs between the pituitary gland, the hypothalamus and the ovaries. Another possibility, she suggests, is that the vaccines have an as yet unknown impact on immune cells that are involved in tissue repair of the lining of the uterus after it is shed during menstruation. She notes also that it is still not known if being infected with COVID-19 has any impact on the menstruation cycle.

Male observes that testing of new drugs in general typically does not include measures taken to ascertain whether they impact the menstrual cycle—a situation that she suggests the medical community should consider. Such efforts, she notes, even if nothing is found, would go a long way toward reassuring women that gender issues are being taken seriously.