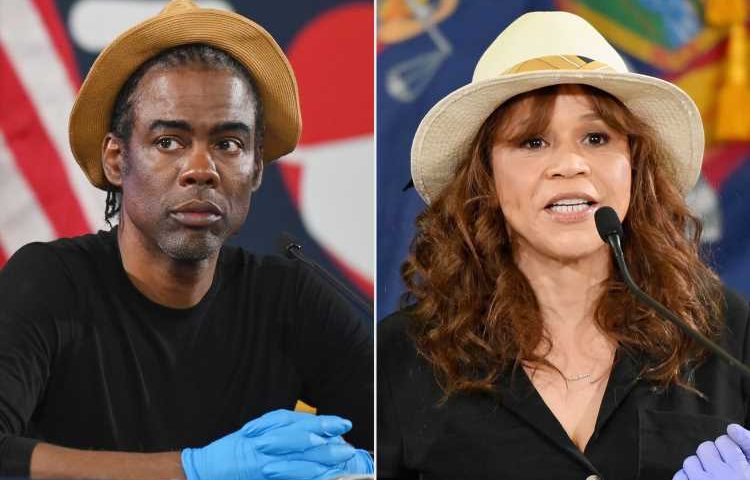 Chris Rock and Rosie Perez are teaming up to help deliver an important message about keeping New Yorkers safe.

New York Gov. Andrew Cuomo welcomed some special guests to his daily press briefing on Thursday, joking that he’s “not cool enough” to make people heed his advice about the importance of getting tested for the novel coronavirus and wearing a mask in public.

“So I’m going to bring in reinforcements to help us communicate that message,” he said, before introducing the two stars, both of whom grew up in Brooklyn, to help him out.

Walking out wearing gloves and masks, both stars removed their protective facial coverings before addressing the state.

“It’s an honor and it’s really good to be here,” the Do the Right Thing actress, 55, said. ”Im proud to be partnering with the governor to make sure that my hometown … my beloved borough Brooklyn and all of New York’s most impacted communities have the resources they need to stop the spread of the virus.”

Perez went on to explain that this kind of mutual respect for each other’s health has nothing to do with politics.

Noting that it had been some time since he’d last gotten a chance to speak to a crowd, Rock began by flexing his comedic muscles.

“I got the test today, I just got tested to come out here, I got a 65 so … just passed” he joked. “I know it’s been hard, but we’re going to get back together at some point and it’s gonna be even better than the last time.”

The actor and comedian, 55, went on to encourage people to get tested — and “make it a festive occasion.”

Rock went on to explain how important it is to continue practicing social distancing in order to avoid spikes in new coronavirus cases and deaths, especially as states continue the process of reopening.

Although there have been more than 29,000 deaths in New York since the health crisis began, recently the state's mortality rate has continued to decline. On Tuesday, Gov. Cuomo reported that 73 in the state had died within the past 24 hours, which marked the lowest daily toll since March.

There have now been over 100,000 deaths in the United States, the highest death toll of any nation in the world.

During Thursday’s press briefing, Gov. Cuomo also announced that he was signing a new executive order, which permits businesses to deny entry to individuals who are not wearing masks.

As information about the coronavirus pandemic rapidly changes, PEOPLE is committed to providing the most recent data in our coverage. Some of the information in this story may have changed after publication. For the latest on COVID-19, readers are encouraged to use online resources from CDC, WHO, and local public health departments. PEOPLE has partnered with GoFundMe to raise money for the COVID-19 Relief Fund, a GoFundMe.org fundraiser to support everything from frontline responders to families in need, as well as organizations helping communities. For more information or to donate, click here.