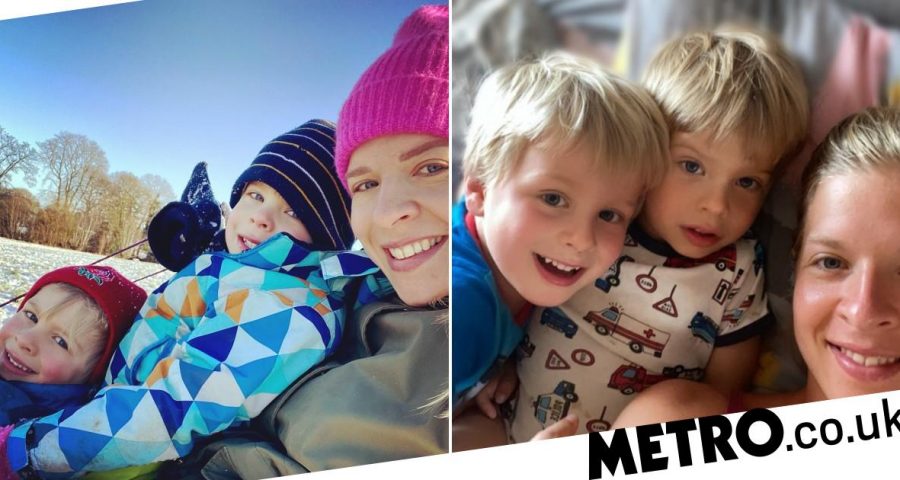 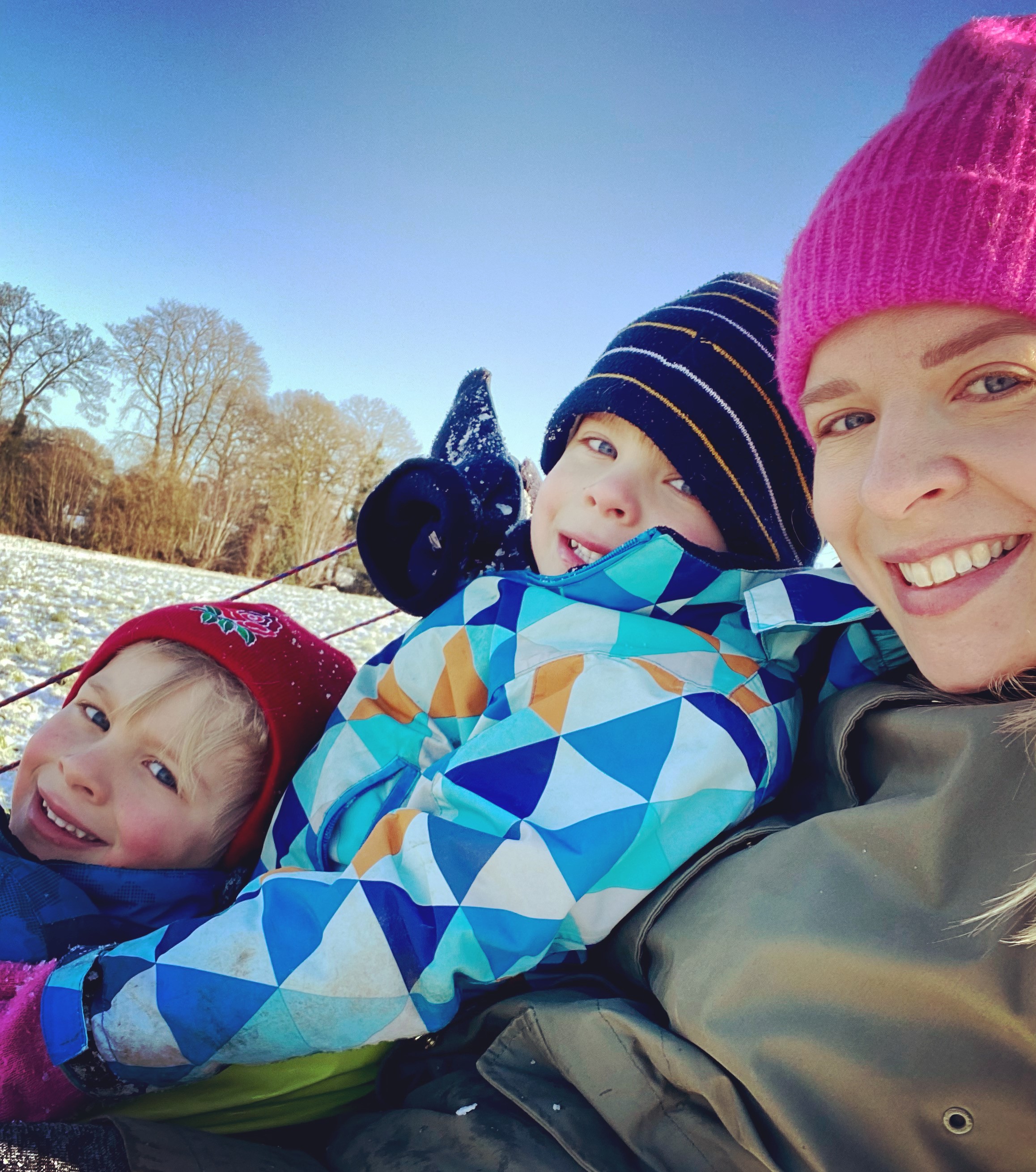 It’s every mum’s worst nightmare. A heartbreaking diagnosis while your kids are still too young to even properly understand what is happening.

Toria Pickering was diagnosed with a rare form of ovarian cancer in 2020 – and her first thought was of her two little boys.

The five-year-old twins are Toria’s world, and she was desperate to find a way to talk to the about what was happening, while protecting them at the same time.

First of all, she had to figure out the right way to approach the issue with the little boys.

‘I asked the pre-school teachers and my best friend who is a primary school teacher,’ Toria tells Metro.co.uk.

‘I didn’t want to tell them until I knew fully what my treatment plan was and what the prognosis was. So, like with all aspects of parenting, I took the bits of advice I thought would work well for us and ignored the rest.

‘Ultimately, I think you know your own children best and what works for them. I knew I needed to keep it simple and that the word cancer (although scary to adults), actually means nothing to a lot of young children.’

Toria was keen to have an honest and open conversation with her children, however her biggest worry was the impact the news would have on them.

When she finally had the conversation with her children she said it was just a quick chat – but that was really only the start of a continual process of communication.

‘The actual conversation was so short,’ she says. ‘But I found they started to struggle and were confused during my treatment, when I was away from home a lot, or when I was home and just in bed all the time, unable to do my usual things.

‘This is when we turned to books to try and help them understand, and deal with the big emotions they felt.’

Toria first realised that something might be wrong with her in February 2020.

‘I didn’t know how long I’d had it for, but I’d noticed a lump in my tummy,’ she says. ‘I was aware that it hadn’t gone away and I should probably get it checked out.

‘Around that time, I was training for the London Marathon. I felt tired, but we are all tired aren’t we? I just thought was normal, because we are all permanently exhausted with work and kids.

‘In early March I went to the doctor, got poked and prodded and because I didn’t really think I was poorly, they said they’d send me for a non-urgent ultrasound scan.’

Toria’s mum is a nurse, and she suggested her daughter should also have a blood test and that she should ask for a CA125 – which is a marker used to help detect ovarian cancer. That marker came back elevated.

‘I then remember looking at the symptoms of ovarian cancer and I realised that I had a few of them,’ she says. ‘I then don’t know if it was because I was more aware of them, but the symptoms did get worse quite quickly that month.

‘In the following weeks, I had various scans and procedures, but noticed it was getting worse quickly. Then Covid hit.’

Thankfully, Toria was able to still have an urgent MRI and CT scan – and was told she has a benign cyst.

‘I thought that made sense, as my mum and sister had ovarian cysts,’ says Toria. ‘I thought, “of course, silly to think of anything else.”

‘It was however getting bigger quickly and my symptoms progressed. Surgery had initially been considered non-urgent, so they advised to leave it until after Covid, ironic as Covid is still very much here. That would have been a very long wait.’

Toria knew in her heart that something was not right. Her symptoms and pain were getting worse, so she ended up going to A&E and had emergency surgery the next day.

‘Because I had had my worries eased before, I never thought the results were going to come back as anything worrying,’ she says.

‘My husband had done loads of reading-up and research and he warned me that it might still come back as something else. But I was certain we didn’t need to worry.

‘So, around five weeks after the operation, I had done about two shifts back at work and thought I would chase the results. Unfortunately, that’s when I was told the news.’

Toria says it was a pretty extreme rollercoaster of emotions.

‘I was in complete shock,’ she says. ‘It was almost a surreal experience, where it feels like it’s not happening to you. It’s very hard to explain. That feeling of disbelief.

‘You then automatically think the worst. I was immediately wondering – how bad is it? What’s going to happen? What does the future look like?

‘I was also in a panic because I didn’t know any details – how bad was the cancer, what stage it was. I feared that this delay in knowing might impact my future. Luckily it didn’t.’

Her boys came into her mind immediately.

‘Of course I worried about myself and what was going to happen, but from the moment I was diagnosed, I was thinking, how would I tell the boys?

‘They were so little. How would they take it? As we do as parents, I started really overthinking it.’

‘It’s a huge thing to tell your children. I thought about how to tell them for quite a while.

‘I was also given advice to wait until you’re felling positive about things, which is quite difficult, when you don’t really know what’s going on yourself. I needed to know what was going on before talking to them.’

During this time, Toria and her family were all at home in height of lockdown, and although her children were only four at they time, they noticed something was different.

‘They are switched on and don’t miss a trick,’ says Toria. ‘We were on the phone a lot and they had obviously heard conversations.

‘One of the boys asked me, “are you dying mummy?” That’s when I knew we need to tell them what was going on.’

Toria knew her boys wouldn’t understand what cancer is, or what exactly was wrong, but they did know that their mum had had surgery.

‘They knew to be gentle around me because my tummy had been bad,’ says Toria.

‘Their response was, “oh okay, what’s for breakfast?” That was great to be honest.’

Toria says the boys started to notice that she wasn’t there as much.

‘I’ve always been at home and although I’ve worked, I’ve been the one that’s always at home,’ she says. ‘I was only in treatment two days every two weeks, but it was an overnight stay. I also had a couple of spells in between in hospital. At one point I didn’t see them for at least a week.

‘I found it so frustrating, as I’m usually really active, but I was in bed a lot of the time.

‘Because of Covid, I was on an escalated treatment program. Ordinarily treatment would have been over five days, but I had it all in one go, with an overnight stay. It really knocked me out. I could hear them and just wanted to be involved, so that was difficult.’

The pandemic made everything harder for Toria.

‘I couldn’t wait to do little things, like take the boys to the park,’ she says. ‘At points during my treatment, I couldn’t even pick the boys up, because I wasn’t strong enough.

‘One of them, every morning, always asks if I can carry them downstairs. So, it was little things like that.’

Although Toria’s cancer was aggressive, thankfully it was in the early stages when she was diagnosed, and treatable with chemotherapy.

‘I was really lucky in that respect, as the hope was I would get better and could start planning things again. When Covid allowed, it was all about getting out and about,’ she says.

Now, Toria is coming to being 18 months post treatment. She was told that she would be under surveillance for seven years. After the year landmark passed, she now has two-monthly bloods and three-six-monthly scans.

‘MRI scans are six-monthly now and in between those I have ultrasound scans and chest x-rays,’ she says.

‘It’s always there, which is why it was important to be honest with the boys and talk to them about it. It’s always going to be a part of our lives.

‘The words will always be around and they will grow-up with me going to hospital for check-ups, which will hopefully get fewer and further between.’

After watching the difficult journey that her young boys went on during her illness, Toria has published a children’s book about keeping hope whilst coping with an illness.

Toria’s book Butterfly Boy is a tool to help parents and family members explain illness to their children. She says it’s an ‘uplifting story’ that reminds us how important hope is.

‘Because of the boys age, we found that books were something that worked really well for them, helping explain things that were going on,’ says Toria. ‘That’s where the idea for Butterfly Boy came from.

‘You know your own child best, so I personally think that being honest and age-appropriate with them is really important. Like all parenting, you also wing it in the moment.

‘Ultimately, I’d suggest asking for help if you need it. Parenting is tough anyway, but parenting with cancer is next level.’

For help dealing with cancer seek out Macmillan Cancer Support and listen to their podcast Talking Cancer.