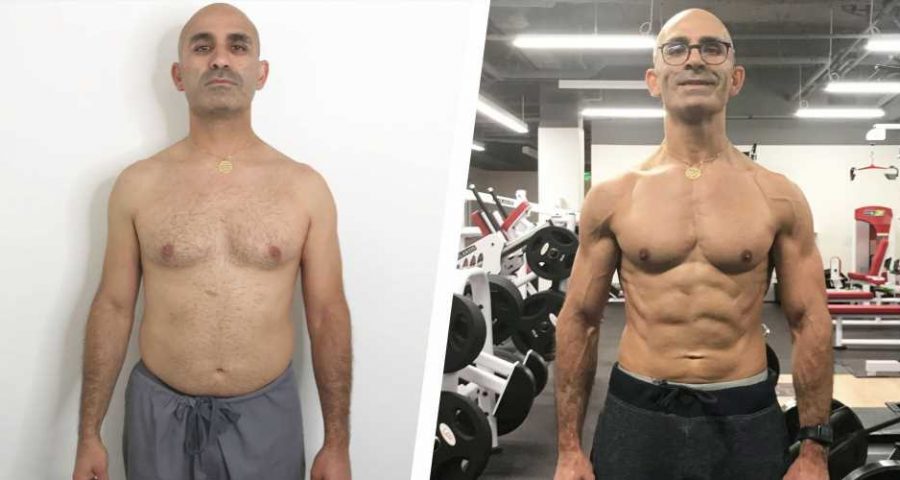 Peyman Solieman, 47, tells Men’s Health how deciding what kind of father he wanted to be led to a physical—and psychological—transformation.

I don’t think it ever dawned on me that I was actually overweight. Once my wife and I had children, I simply found it more difficult and not worth as much to invest time in myself, as it meant less time with my kids. As a surgeon, I get up early and work long hours, and I told myself that if I go to a gym after work then I would have almost no time with them, and that was not a choice I was willing to make. More than that, as I looked around at friends and family, I was still thinner than my contemporaries and told myself I was still good.

I always told everyone that as a doctor diet was everything, calories in, calories out and they should forget about all the rest of the fads. I prided myself on what I thought was a low-calorie diet and since I often missed meals during work felt I was OK. However, when you combine a diet where you really don’t think about what you eat with an almost-10-year period where I stopped working out, you have the makings of an out of shape dad.

A combination of things all led to the realization that I had to change. My wife started working out, and I launched a men’s skincare line based on the idea that men should take care of themselves, that they’re worth it, and valuing themselves will give them confidence. As all of this was going on, I was walking down the stairs one day and found myself turning my legs in a little. I thought, how could I have reached a point where I was actively crutching myself just walking down some stairs, while preaching about the importance of self-care? I started looking honestly at my life, and asked myself what kind of dad I was going to be. Would I be able to run around with my kids, or would I always be too tired?

I knew I couldn’t do this by myself, and that just joining a gym wasn’t going to result in the changes I wanted. That’s when I found Ultimate Performance. My trainer there, Eddie Baruta, asked me what my goals were, and what my inspiration was. In that first session, he started me off doing split squats in the mirror with no weights. On the seventh rep, I literally fell over. I was so embarrassed, and couldn’t believe I had reached that point. We worked on a bunch of things for an hour, and by the end I literally could barely walk and felt like I was going to throw up.

I started meeting Eddie three times a week at for 6 a.m. training sessions that were different than anything I had done before. Everything was slow and methodical. Interestingly, I was never sore; it was not one of those workouts where the next day I couldn’t walk or bend my arms. I was exhausted after each workout, like pushed to my limit, but the next day I was functional and could see my patients and do surgery normally.

From there, it really was about a real lifestyle change. This was not about just a couple of workouts a week. I was measuring my intake of protein, carbs etc, watching my daily step level, and Eddie was checking in on me every day to see that I was keeping it straight and holding me accountable.

The weight loss happened quickly, and there was a noticeable change in my body, I think, within a month. By the end of the 4-month process I had lost almost 20 pounds and was as light as I had been in high school, but I was also completely shredded and had reduced my body fat from 27 percent to 11 percent. I had never felt stronger or looked better, my sleep had improved, and I had a ton more energy. I could have my 6 or 8-year old hang around my neck and do pull ups. My kids were talking about how strong I was and how impressed they were, which was the greatest part of this process.

The goal is now to maintain a healthy place. We stopped training about 4 months ago, and while I have not been able to work with the same intensity as I had with Eddie, I am still stronger than I ever was, and manage to keep exercising 3 times week. I maintain my diet without having to measure it any more; I have much more of a sense of the portions I’m eating and my calorie intake. The goal has been to take this break for few months, and then get back at it and see if I can put a few pounds of muscle on and get even stronger.

I have two things I say to people who are just getting started in their own weight loss. First, you cannot outwork your diet. And just as importantly, you don’t need to achieve all of your goals in that first week, or push yourself to extremes. If you want real change and long-term health, simply strive to be just a little stronger or better each day, and if you do that, I promise you, you will see amazing results—and never use age or time as an excuse.