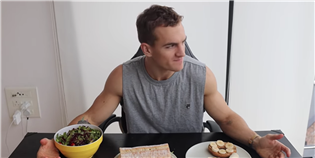 We’ve seen a few people use an extreme version of intermittent fasting known as one meal a day (OMAD) to lose weight. As the name suggests, OMAD means eating one meal a day, typically during the same hour every day; some proponents say you can eat whatever you want during that time, while others advise still eating healthy.

OMAD is a radical way of controlling your calorie intake, and it’s controversial: As one expert points out, it’s hard to get all your nutrients in one sitting even if you feel full, and that one-hour-a-day window makes it hard to refuel after a workout.

Fitness vlogger Joe Delaney wanted to see what an OMAD diet would do for him, so he tried it for a week. After pointing out that celebrities such as Twitter CEO Jack Dorsey and former NFL star Herschel Walker have hyped extreme fasting, Delaney says, “Personally, I think it sounds like a terrible idea.” Then he jumps into it.

At first, Delaney adapts pretty well. He eats late in the day until he’s full; one mid-week meal hits 2,5000 calories, which he soon decides is not enough. He starts doing his workouts as soon as he starts feeling hungry, which seems to quell the feeling—he suggests it’s “habitual hunger.” Going to bed early, he says, also helps with late-day hunger.

The biggest problem, he discovers, is variety. He ends up eating large portions of a few things, rather than smaller portions of different food. He had trouble getting enough calories in the one-hour window to eat. By the end, he says, “It’s not great.” Though he lost 2.5 pounds, he can’t list any benefits—no increased concentration or mental acuity, and whatever time he saved not thinking about meals was offset by feeling hungry. “Overall,” he says, “I think it’s bullshit.”