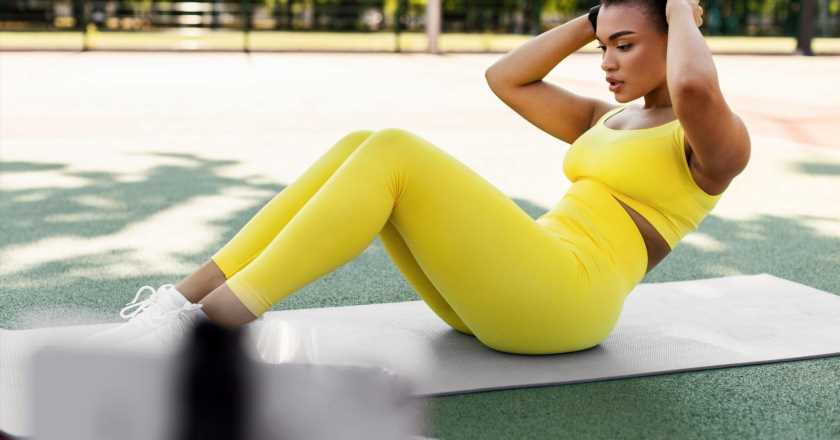 A strong core is one of the best ways to ward off injury – but doing crunches isn’t the answer.

It goes without saying that every muscle in your body needs to be worked to build total-body strength. But how often do you actually work through every inch? Very often, we end up doing the same moves again and again, and that can be problematic.

In a recent Instagram post, Dr Stacy Sims, physiologist and female exercise specialist, explains the problem with that. Writing about how women tend to be more injury-prone than men, she explains that women have “wider hips that make us more likely to be knock-kneed.”

She adds: “Hormones that may make our connective tissues more lax at certain phases of our menstrual cycle. [And] simply being smaller than men. When looking at ACL injuries, our ACL and the notch through which the ACL connects to the femur are smaller.”

The way to help that is to build more strength – in the right places. “As a woman, so much of your strength and stability comes from your hips,” she writes. “While we do have powerful legs, we tend to have relatively poor core strength by comparison – setting us up for injuries such as ligament blowouts,” she writes.

How does your menstrual cycle impact your risk of injury during exercise?

That doesn’t mean stop prioritising leg day, it just means that our core needs to play catch up. “Before you throw your arms up in frustration, just know this: Injuries are avoidable. And much of it requires attention to your core. But what is your core anyways? In short, everything but your head, arms and legs,” she writes. “We need to be focusing on the glutes (your steering wheel and important when jumping!), abs, obliques and back so that when you move, everything acts as one solid unit.”

Her solution is to stop doing the one move that’s become famous for our ‘core’: crunches. Instead, swap them more total-body work. Not because crunches aren’t good for some people and for some muscles, but because they shouldn’t be a priority if your goal is to build a functional, injury-free body.

Engaging your abdominals in your workout will build better core strength.

“Crunches ignore the glutes and back, which is what holds you upright,” she writes. Plus, we should be training our body to get better at the things we want it to do in our everyday life. “You want your core exercises to make you look tall and straight – not like a bendy straw (we do too much hunching already day-to-day).”

So what exercises should we be doing? Well, Dr Sims reminds us that planks are better than crunches for full-body strengthening, making “the abdominals work twice as hard as traditional crunches, AND they strengthen your shoulders, back and glues at the same time.”

Crunches vs plank: what is most effective for a stronger core?

As well as core-focused exercises, such as planks and bird dogs, the other way to build all-over core strength is to spend a little more time on glute, back and shoulder exercises and a little less time purely on the abdominals. The bonus? By engaging your abdominals during these exercises, like hip thrusts or bent over rows, your abs will get stronger along with your other core muscles.

If you need any more convincing to focus on your core, Dr Sims leaves us with the news that in a study comparing the biomechanics of elite dancers and team sport athletes, researchers found that dancers all landed steadily with stable knees after jumping. “The female team athletes? Not so much. One of the main differences between the two? Dancing’s concentration on developing core strength as the foundation of movement.”