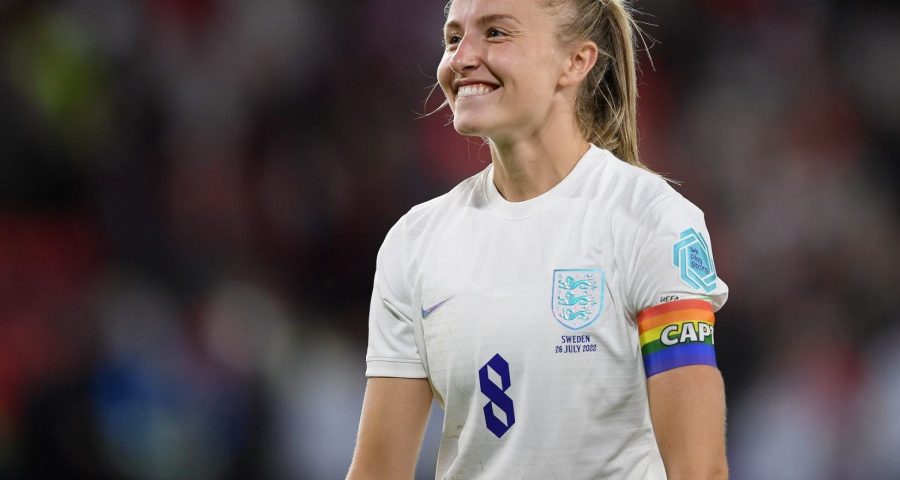 Stylist sat down with Lionesses captain Leah Williamson to reflect on one of the biggest years in sport.

Football fan or not, I don’t know of a single person that wasn’t even a *little* bit excited when England’s Lionesses brought it home in the Euros this summer.

It was a historic moment not just for the women’s game, but the sport in general, marking the first time an English team has ever taken home the trophy, after the men’s team reached the final but ultimately lost out in Euro 2020.

Such a monumental achievement isn’t at all lost on Lionesses captain and Arsenal defender Leah Williamson. Speaking to Stylist Strong Women from the training ground, she reflected on perhaps the biggest year of her career, and her hopes for the sport going forward.

2022 has obviously been a huge year for not just women’s football but sport in general. Can you tell me a bit about what that’s been like to experience first-hand, and the momentum it’s created?

Leah Williamson: “I think we knew that there was something special going on during the tournament with the feel of it and it being in England. So it was the first time that most of us had felt that shift and seen the change in atmosphere [towards the game] first-hand. Post-tournament you alway see a bit of an influx and increased interest, but this just feels so much more sustainable. We’re talking about accessing people from all ages but especially women, from young girls to older women who have left the game and almost been forgotten about. That’s what makes me the most proud, I think.”

Can you talk to me a bit about how sport and movement has been a positive force in your life?

LW: “I was very lucky that I found sport at such a young age in terms of my family being interested. My mum was very active and that always had an influence on me when I was younger, so that was beneficial. But I think the main thing is that so much of society tells women what they should and shouldn’t look like, whether we try to ignore it or not. But it’s all gotten to us at some point and sport and fitness and being active is one of the best ways to make yourself feel good. You’re not doing it for anybody else, you’re doing it because it makes you happy. Yes, I play football professionally and it’s my job, but I play because I love it.”

Has there ever been a point in your career where you felt like giving up on football and what inspired you to persevere?

LW: “Growing up, it wasn’t always a set thing for me that I would be a professional footballer. I was quite academic as well, so it was a bit of a gamble to go down the football route. Luckily when I turned 18, there was a professional contract on the table, but at 15,16 where I was making decisions about university, I was wondering how much longer I’d be doing it for or if I could keep doing it alongside my studies. I just wanted to see how good I could be and that’s what always motivated me. I don’t want to be that person that looks back and says ‘maybe if this had happened, I could have been excellent’.”

How do you motivate yourself to stay active in the winter?

LW: “I think I’ve just gotten used to it [the weather]. I think even when getting out and moving is the last thing you want to do, no one ever regrets going. If it’s something you know you’re going to enjoy eventually, it’s nice to prove that you have it in you to be disciplined.”

How do you prioritise mental and physical rest with such a busy schedule?

LW: “That’s something I’m still trying to figure out. I think there’s so much there so much in the world that I’m interested in that falls outside of the world of football and I want to experience it all. I think your body is again a strong indicator and tells you what it needs, it’s just whether you listen to it or not.”