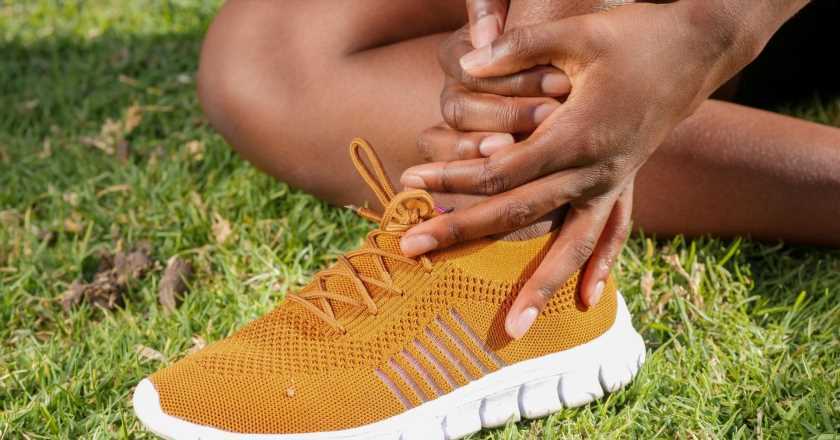 Ankle pain and injury is more common than you’d think. Here’s how to prevent – and deal with – tendonitis and sprains.

I’m currently dealing with a flare-up of recurring tendonitis in my posterior tibial (a fancy way of saying the inside of my ankle). Meanwhile, two of my best friends sprained their ankles within a week of each other – one from an insignificant trip that she landed at the wrong angle, the other from a skateboarding accident. Google would suggest the three of us aren’t alone in our struggles, as searches for ankle problems are surging right now.

“Ankle injuries are most common right now – leading up to the marathon and half marathon season – but we’re also seeing a lot of cases of pain as a result of lockdown ending and people getting back to sport and exercise,” says Jaco Visage, senior physiotherapist and clinic lead at Ultra Sports Clinic. But unlike knees or hips, the ankles are a joint we don’t give much thought to until they suddenly start to hurt. That’s an oversight; prevention is always better than pain when it comes to joint pain.

Does running really damage your knees and cause knee pain?

What causes ankle pain and injury?

“Depending on the sporting code is kind of the outcome or injury outcome that you get,” explains Visagie. By that, he means the impact and movement patterns of your go-to workout can pretty much determine what the cause of your pain is.

“In runners, we don’t see as many ankle sprains but rather the overuse injuries such as tendinitis and tendinopathy. When it comes to more agility-like sports such as hockey, rugby and netball, we see more ligament damage and rolling of the ankles. And then in January, we get an influx of trauma-related injuries, such as fractured ankles, from skiers.”

Ankle injury can be caused by overuse.

While we’re very quick to believe that pain in one part of our bodies therefore means that that part must be either really weak or immobile, Visagie is keen to acknowledge that your ankles themselves may not be the problem. “When we do rehabilitation it’s very seldom that we only focus on the ankle. We look at the hip stability, we look at general movement patterns, we even look at problems with lower back. We do believe the body is a kinetic chain, so if you’re affected in one area, the problem might originate from another. It might also originate from your workout routine or, as with trauma-induced injuries, they can be nothing you can prepare for,” he says.

How to prevent ankle pain and injury

With agility sports, you need to improve your understanding of how you move your joints. Not part of a netball team? It’s still important for those who do a lot of HIIT that require jumping and twisting. “It’s basically about improving how the brain stabilises the ankle to avoid painful movement,” says Visagie. “To do that we work on balance and challenge the tiny, intrinsic muscles around the ankle and foot on balance balls to increase strength and awareness.”

“Think of the foot or the ankle almost like a kite. And you’ve got to be pulling on both strings equally otherwise the kite is going in one direction or the other. We need to make sure that there’s no imbalance between the muscle groups supporting the ankle or you can easily roll to one side,” says Visagie.

Specifically, it’s the peroneus muscle (on the outside of the ankle), the tibialis (on the inside) and also muscles in the calf that contribute to stability in the ankle.

If you’re noticing that you roll or sprain your ankle easily, you will probably need to work on your imbalance. “Generally, 95% of patients have muscular imbalances. We use therabands to build strength on the inner or outer ankle by placing the band around the feet and doing inversions or eversions – basically rotating the foot in the opposite direction to the side you need to strengthen.”

Strength training: 3 of the best calf exercises you can do at the gym, or from home

To avoid what Visagie calls “reactive tendinopathy” – the first stage of tendon issues that are common in those who increase their load too fast and categorised by pain and aches in the morning that ease after movement – it’s about going slow. “It sounds like a major cliche to say don’t do too much too soon and everybody always says they won’t,” he says. “We use quite a specific acute chronic workload ratio to determine how much a person should be running. But the general rule of thumb is don’t increase more than 10% on a weekly basis when you start training. This gives the tendons time to adapt to the load, otherwise they shorten, thicken and lose their elasticity and it becomes achy, sore and painful.”

How to deal with tendonitis in your ankle

If you’re gearing up for the marathon or have just started a new plan that’s got intense pretty fast, you’ve probably missed the boat on prevention. When it comes to tendonitis, there’s one big rule: don’t take the weight off. It might sound counterintuitive, but stopping all exercise on tendonitis is a big mistake. “With tendinopathy specifically, complete rest will make it feel better, but you’ll go straight back to where you left off when you start activity again. That’s because you haven’t changed the actual structure or the state of the tendon by resting it. You need to strengthen it in order to get rid of the irritation,” Visagie says.

It’s best to do this under the eye of a professional who can get the pain under control with a carefully planned loading phase and then help you increase the mileage and intensity very slowly and specifically, along with loading exercises like calf raises.”

Sprains, strains and breaks do need to be rested, but as always you should follow the advice of a professional tailored to your situation.